Where is the Holycross Abbey Trophy?

Any information on the whereabouts of the famous Holycross Abbey Trophy would be appreciated. 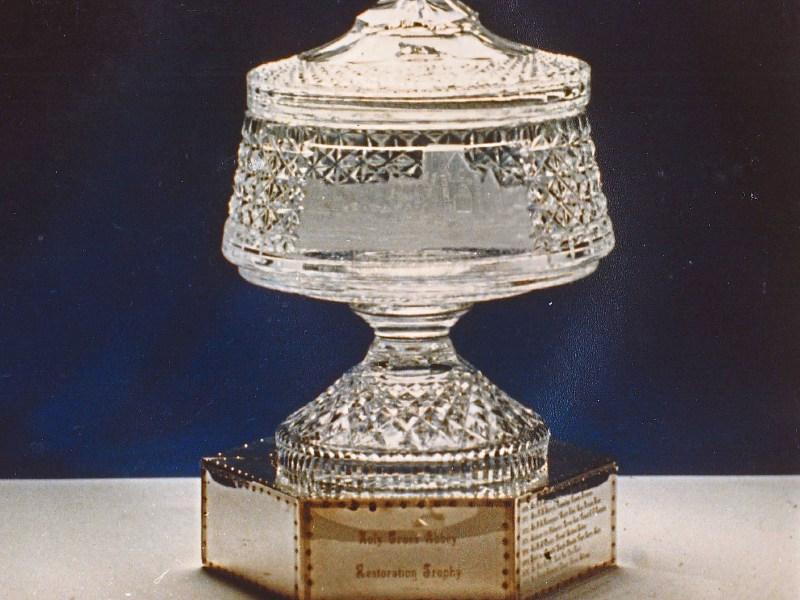 Mystery surrounds the location of the famous Holycross Abbey Trophy which was presented to the winner of the Holycross Show - that wonderful festival which ran in the parish for nearly three decades to help raise funds for the restoration of Holycross Abbey, writes Noel Dundon.

The magnificent trophy was commissioned from Waterford Glass in 1970 and displayed the Abbey as it was before restoration. Competition for the Holycross Abbey Trophy was always the highlight of the Show which attracted the very top jockeys in Ireland and from abroad including the likes of Paul Darragh, Eddie Macken, Willie Mullins, Capt. Con Power, Capt. Gerry Mullins, Francis Connors and Tipperary's own Capt. Larry Kiely to name just a few.

The trophy, it is believed, was presented right up to 1995, but now nobody seems to known where it is. Donors who contributed to the purchase of the trophy include the late Canon Patrick J Lynch, PP Holycross; the late Patrick J O'Meara, Killough Castle; the late Thomas Hickey, VS Killinan; the late James Cahill, Holycross; the late John Doyle, Glenbane, Holycross; Tom O'Donoghue, Holycross and one anonymous donor. Only two of the original donors remain living and the hope is that the Trophy can be located and perhaps returned to the legal owner - the Parish Priest of Holycross of the day.

The Trophy was one of the first of its kind and it became one of the most coveted on the jumping scene. It later served as a model for trophy makers.

Holycross Show grew from humble beginnings to become one of the most important events of its kind outside of the famous Dublin Horse Show. In 1977 one of the largest crowds ever attended and the then Chairman of Bord na gCapall, Mr Stan Diffley said in his address at the event that “ it was a revelation to find this out of the way show in such a fantastic location, coupled with the fact that the people had gotten together over the winter and made their own fences - all of this at a time when the Bord is being pressed by people looking for handouts.”

The sense of community spirit which prevailed in the parish of Holycross Ballycahill and its surrounds was central to the success of the Show and in 1978 it was up-graded to the status of full horse show, rather than gymkhana.

Paul Darragh, one of Irelands most celebrated riders wrote in the 21st anniversary souvenir booklet of the Holycross Show that 'Holycross does more than honour its heroes, it plays a big role in making them. Those of us who bring horses or ponies, jumping or showing, know the standards will be high. There is quality organisation and quality competition with a quality venue. To win at Holycross is a comforting indicator.”

Such was the prestige of the Show that in 1980 the three times Aga Khan Trophy winners made their first appearance outside of Dublin when they arrived in Holycross. All four riders - Eddie Macken, Con Power, Paul Darragh and James Kernan had all won the Holycross Abbey Trophy and it was fitting that they should attend the event to be feted by those who came to Holycross annually.

Such was the repute of the Holycross Abbey Trophy that former Taoiseach Charles J Haughey, a regular contributor to the Show, asked for permission to take the Trophy to his home in Kinsealy to show it to friends who were coming from France. He also ensured that the Trophy was displayed at the RDS with all of the details of its origins and it generated a lot of interest from the spectators who attended the annual event.

Before each of the Holycross Shows, the Holycross Abbey Trophy was displayed in the shop window of Messrs. Ryans Jewellers, Liberty Square, Thurles - the late, very talented jeweller Matty Ryan had designed an octagonal base for the glass trophy and engraved the winners name on it each year.

Any information on the whereabouts of the famous trophy can be furnished to us here in The Tipperary Star and we will pass the information on to the relevant people. Please help out to locate the trophy if you can at all.