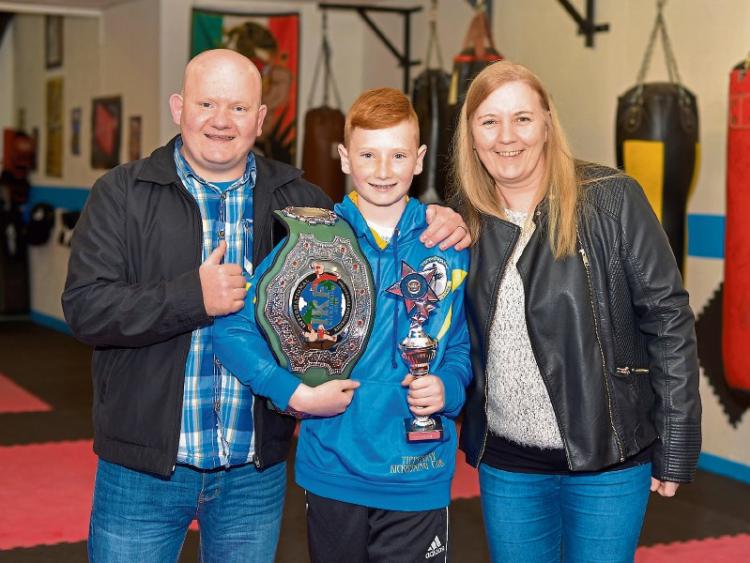 Scott fought a tough match against a taller 13-year old Darragh McGarry from Limerick for five rounds instead of usual three.

“I started getting tired in the fourth and fifth round but when you know it’s a title fight you fight harder and my coach Craig was encouraging me,” said Scott.

Scott’s family and friends from Tipperary and Limerick travelled to Dungarvan in full support. His mother Margaret described the whole thing as nerve-wracking but fantastic. “My father Billy Carey who is 75 years of age, travelled to Dungarvan to see Scott fight for the first time. He was so emotional as he never knew so much went into this sport and they had to do so much to get to the standard they are at now.”

Scott from Pearse Park started kickboxing five years ago and is a Silver World medalist. He has trained with Coach Craig Sutton for five years at the Tipperary town Kickboxing club.

“I was very confident for Scott going into his Irish national title fight,” said Coach Craig. “He had a good win the previous week at a UK International low-kick tournament and he has consistently put in the training and is a dedicated fighter. .”

Eighteen-year old Chloe Quinn from Aherlow Crescent Tipperary town was competing in the Senior IKF title category, Straw Weight under 49KG. Chloe has been kickboxing for three years and is a World Bronze medalist but this was her first time competing in the senior (over 18’s) category. Chloe was up against thirty-four year old Alice Mahony from Thurles and fought very hard but amazingly lost by only one point. “I’m absolutely gutted,” said Chloe. “To lose by only one point is difficult. . At the end of the fight I thought I just had it and I was devastated to lose.”

Coach Craig Sutton is very proud of Chloe’s performance. “Chloe’s opponent was very experienced and has been around a long, long time but she fought extremely well and she had done the work and training in the lead up to the fight. It’s heartbreaking that she lost by one point but there’s a re-match in October.”

“The Tipperary Kickboxing club wishes to thank Shane Kelly, Tipperary Pharmacy for sponsoring Scott and Brazil’s Restaurant for sponsoring Chloe. Your sponsorship is very much appreciated by the kickboxers and their families” he said.