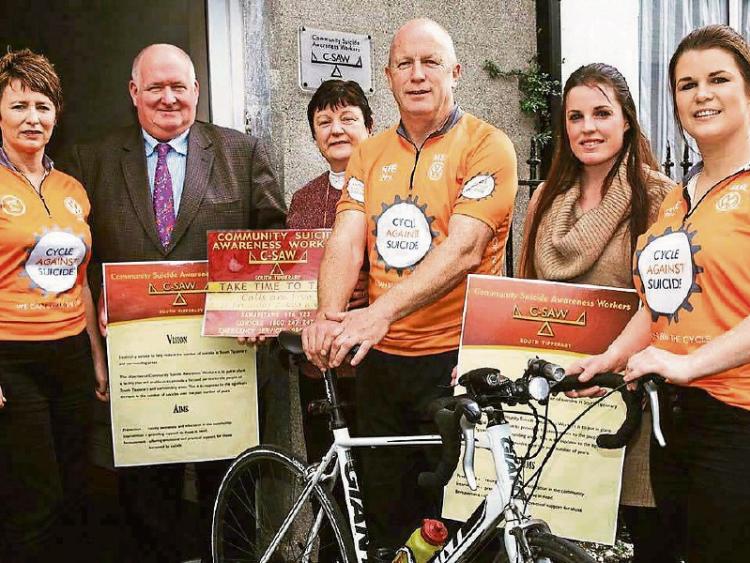 A well-known GAA referee is swopping his whistle for a bicycle to take part in the nationwide Cycle Against Suicide.

Keith Delahunty from Ballinboher, Powerstown, Clonmel is one of the local people taking part in the 1,400 kilometres cycle, which begins in Dublin on this Sunday, April 24 and continues until May 7.

There will be an overnight stop in Tipperary town on Tuesday May 3 before a stop for lunch in Clonmel on the following day, Wednesday, with a shorter break also planned for Cahir earlier that day.

"I did two days of the cycle last year and after the great atmosphere that everyone experienced, and the superb welcome we received in Clonmel, I decided to do the full route this time", says Keith.

He will be joined by his sister Sabina and his daughter Danni for the Tipperary to Waterford leg of the cycle.

Keith is raising funds for Cycle Against Suicide and C-SAW, the Community Suicide Awareness workers in South Tipperary whose welcoming and spacious headquarters are based at 24 William Street in Clonmel.

"Both organisations are doing great work to highlight the issue of mental health awareness", he says.

"Nobody knows what's going on inside a person's head and something can just click. Men especially don't talk about their problems or worries but it's important for everyone to keep communicating with each other".

Now entering its fourth year, Cycle Against Suicide is an initiative started by Irish entrepreneur Jim Breen, as a result of his appearance on RTE’s The Secret Millionaire programme.

The main objective of the cycle is to raise awareness of the considerable help and supports that are available for anyone battling depression, self-harm, at risk of suicide or those bereaved by suicide.

Over 800 people die by suicide on the island of Ireland each year. That's 800 families and communities devastated; 800 lives cut short.

Cycle Against Suicide aims to change this by beginning a conversation about mental health and getting the message that it’s okay not to feel okay and it’s absolutely okay to ask for help into schools, businesses and communities throughout the country.

Keith Delahunty has been greatly encouraged by the support he has so far received for his participation in the cycle, which will travel around 100 kilometres (or 60 miles) each day.

Anyone who wishes to sponsor Keith may do so by contacting him on 087-6876926 or on the Facebook pages of Danni Delahunty or Sabina Caffrey.

Keith and all the other cyclists are wished all the very best on the Cycle Against Suicide.