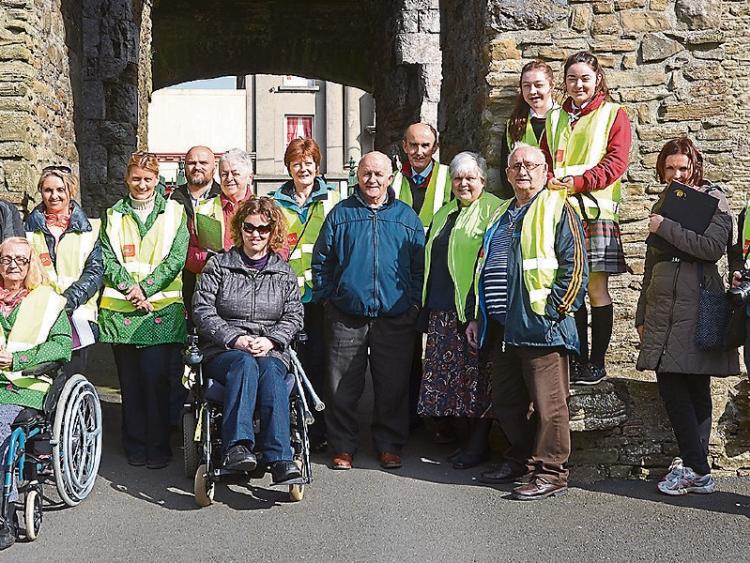 We often see people walking through Roscrea for pleasure and of course hundreds of people walk through everyday to get their shopping, go to the post office, the playground or to see the GP.

What might a mobility challenged person encounter if they walked from the post office to St Cronan's RC church via Rosemary Street and on to Abbey Street or if they took the route down Castle Street and across Ballyhall toward the rear entrance of the church? When a person is older, using a wheelchair or pushing a buggy, or has a visual impairment, it is important that the town is ‘user friendly’ so that everyone can access the town.

Age Friendly Roscrea has started a walkability study of Roscrea, to see how it measures up against a national audit tool and other towns in the country. Last Tuesday, Shane Winters from the national Age Friendly office visited Roscrea to brief team leaders on the audit tool. The next day, 20 enthusiastic participants divided into five teams covering five routes around the town. Participants included TY students & people with wheelchairs and visual impairment.

The process was a real eye opener for the people involved. The town looked really well and was very clean with very little litter on the streets, due in no small way to the recent clean up by Roscrea Men’s Shed. The Moneen River and historical buildings, like the Castle always look their best basking in the spring sunshine. Roscrea is a town with a past, a town with real character.

These same historic features that contribute to the town's personality are also a major physical constraint when it comes to development and upgrading but with creativity and imagination it is possible to develop solutions to maximize accessibility. It was noted that work on footpaths had recently been completed on both the Dublin & Limerick Roads and are just about to start in Assumption Park. The findings of the first audit were similar to those found in other historic towns such as Kinsale. A second walk around will take place this week and then a report will be compiled. Three key areas emerging from the audit include:

The teams noticed that many drivers were driving too fast around the town of Roscrea, often parking on paths or in front of pavement dishes, designed so that people with wheelchairs or pushing buggies can dismount easily from the pavements. Some cars were found parked in disabled spaces but no badges were displayed.

Some pavements were very narrow and un-level. Moss was growing on some paving slabs, which is unsightly and can become slippery if wet. The teams noted dog fouling, broken kerbs, damaged cobbles, broken paths and street furniture and obstacles on pavements.

On many roads there are no designated crossings for pedestrians and where they exist the position of some of them is questionable.Ramps in the town, where they are present appear to be placed inappropriately in some locations, are damaged or lipped.

Other interim findings include difficulty accessing some public and commercial buildings, inadequate signage, challenging roads for cyclists and poorly designed areas for bus stops with no seating or protection from the elements.