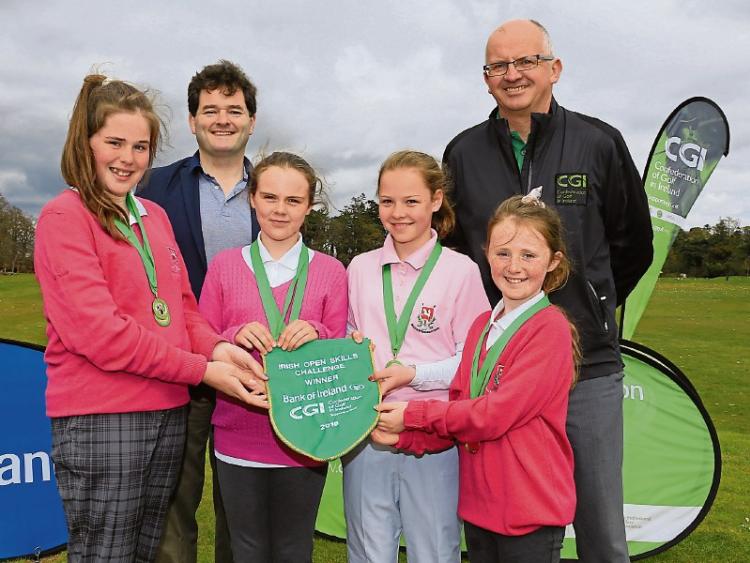 The team of Kaelin O’Keefe (13), Chloe Ryan (13), Lauren Kelly (12) and Caitlin Shipman (10) combined for a dramatic playoff victory against Naas to book a trip to the K Club for next month’s Dubai Duty Free Irish Open Pro-Am.

Teams from all four provinces were competing for the national title and it was the Tipperary club who emerged triumphant as the Munster champions got the better of Naas in a playoff.

“I’m so proud of them,” said team manager, Marion O’Riordan, who is also the head professional at Ballykisteen. “I’m delighted for the girls. They have worked so hard for this.”

Having won the Munster section two weeks ago, Ballykisteen qualified for today’s National Final and were competing against Naas, Holywood and Enniscrone for the top prize.

With four players on each team, each player specialises in one of the four particular skills: Driving, Iron Play, Chipping and Putting. After each team had completed the challenge Ballkykisteen and Naas were level on 190 points.

A playoff was required to determine the overall winners and it was Ballykisteen who were celebrating. “It was so tight. You’d feel for Naas because it was so close,” said O’Riordan. “Golf teaches kids so many skills and so many life skills. It teaches them grit and determination. They’re skills that crossover to all walks of life.” Ballykisteen will now enjoy a unique ‘meet and greet’ opportunity with a top player at this year’s Dubai Duty Free Irish Open Pro-Am on 18 May.

The Irish Open Skills Challenge is organised by the Confederation of Golf in Ireland (CGI) with support from Bank of Ireland. The competition, for players under the age of 15, is designed to help young golfers focus on the key skills of the game and to encourage them to be the best that they can be.