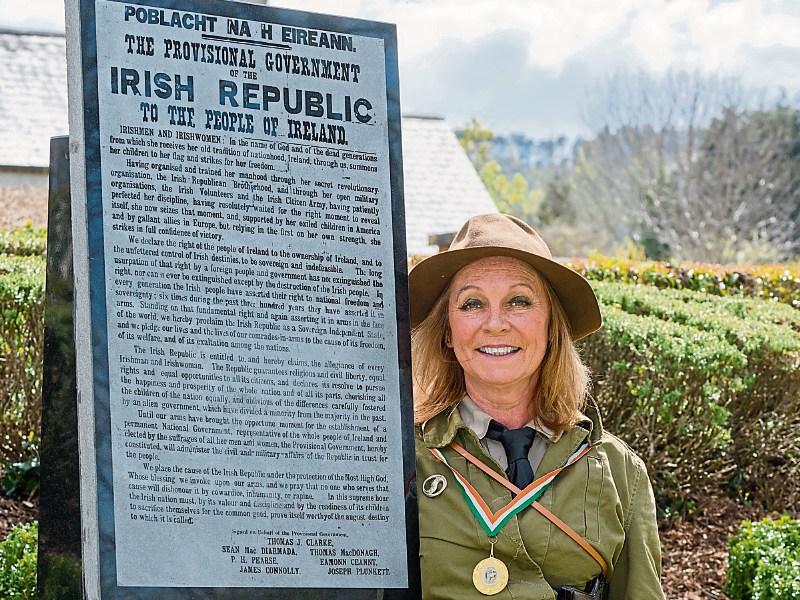 A commemorative plaque of the 1916 Proclamation was unveiled at the new Garden of Remembrance at Parkside in Carrick-on-Suir last Saturday to mark the centenary of the Easter Rising.

It was a poignant ceremony carried out with respect and dignity by all who took part. Seven oak trees planted in the garden each bore a photo of the signatories of the Proclamation.

Former Sinn Fein Cllr and former Mayor of Carrick-on-Suir Liam Walsh laid a wreath in remembrance of all republicans who died fighting for Ireland’s freedom in 1916 after the unveiling of the Proclamation by Independent TD Seamus Healy and Anne Marie Magorrian. Johnny Carroll sang the “Foggy Dew” ballad about the 1916 Rising at the ceremony.

Ms Magorrian's great grand aunt Sarah Carney (née Cassidy) was the mother of Winifred Carney, socialist, suffragette, trade unionist, secretary and confidant of James Connolly, who was the first woman to enter the GPO with him in 1916 armed with a Webley revolver and typewriter and the last to leave with the injured Connolly alongside nurse Elizabeth O’Farrell and Julia Grenan, all Cumann na mBan members.

The Easter Rising centenary celebration, organised by the Carrick-on-Suir Remembers 1916 Committee, began with an U-10 camogie/hurling blitz in Davin Park. All children who took part in the blitz receiving a goodie bag and a special commemorative medal to mark their participation.

Each club was presented with a framed copy of the Proclamation and then marched behind the Carrick-on-Suir Republican Flute Band to the new 1916 Memorial Garden situated at Parkside, for the remembrance ceremony. The Carrick-on-Suir Remembers 1916 Committee thank the following for all their help and participation: Local GAA clubs for taking part in the U-10 Blitz, Linda Torpey for her help with posters, Aldi for sponsoring the Blitz and Darren Walters and his colleagues for building the stand and plinth for the Proclamation. Thanks to Mossy Power Nursery, Turkstown for donating the oak trees and Evan and the team of gardeners from Carrick Town Hall for their sterling work in preparing and planting the garden.

The Committee further thanks Martin Nolan and Nicola Keating of Carrick-on-Suir Municipal District Council for their assistance in planning the garden; Tom Walsh and Sean Murphy for their informative and entertaining talks in the library and Gerdie Power for donating the carved clock for the raffle last month.

The Committee also thanks to Carrick-on-Suir Municipal District Council for helping to fund the project, the Gardai and all involved in the commemoration ceremony on Sunday.

The Committee finally thank the staff at the Junction Bar for facilitating its meetings, events and hospitality and all who supported the commemoration events held over the last few weeks including the library and its helpful staff.