Gold medals for Miceál and Bernard 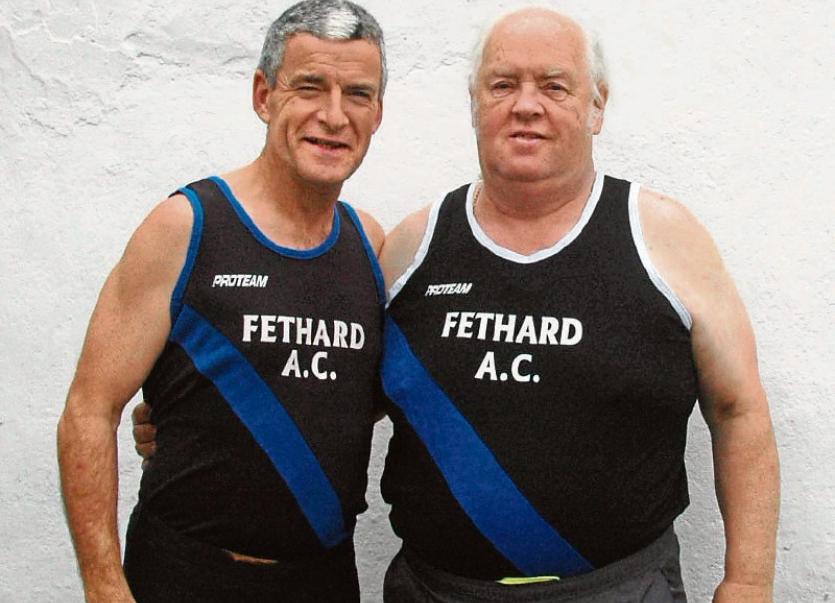 Bernard Feery and Miceál McCormack (pictured below left) were our two stalwarts to attend the Tipperary AAI Masters Track & Field Championships in Templemore on Sunday last. Competition was keen with disappointing numbers present but all victories had to be fought hard for on the day.

The first event was walking and Miceál was in ripping form to take the gold in a personal best for the 3,000 meter race. He has now earned a well-deserved break from his daily visitations on the roads around the town. His exploits in the 100 metre event was not as good with a third place finish after a terrible run.

Bernard Feery was in top form and took the 800 metre in fine style and later added a second gold by winning the 5,000 metres in impressive form. Bernard now continues training on Monday night around the town at 6.45pm for the upcoming Munster Championships in Waterford and the All-Ireland’s in Tullamore later in the year. Both athletes are competing in their last year at their relevant age group and are at a slight disadvantage, but that will change next season when all will compete at a level playing field. Well done ‘boys’, keep the flag flying.

The annual ‘Walls of Fethard’ race is approaching fairly lively, and this year’s event will take place on Thursday, May 26, at 8 pm, more information later.

Membership fees are now overdue so please contact committee and deal with it as soon as possible. As we still have no permanent field for training, it is very hard to get a training structure in motion for a juvenile section, but we are looking into the matter and hopefully some positive news in relation to the development of the proposed Community Town Park, which is currently in the pipeline, details later!

Our AGM will be held in McCarthy’s Hotel this Thursday night, April 28, at 9pm. All are welcome.