St. Anne's gear up for Cycle Against Suicide

Cycle Against Suicide rolls into Tipp Town next week 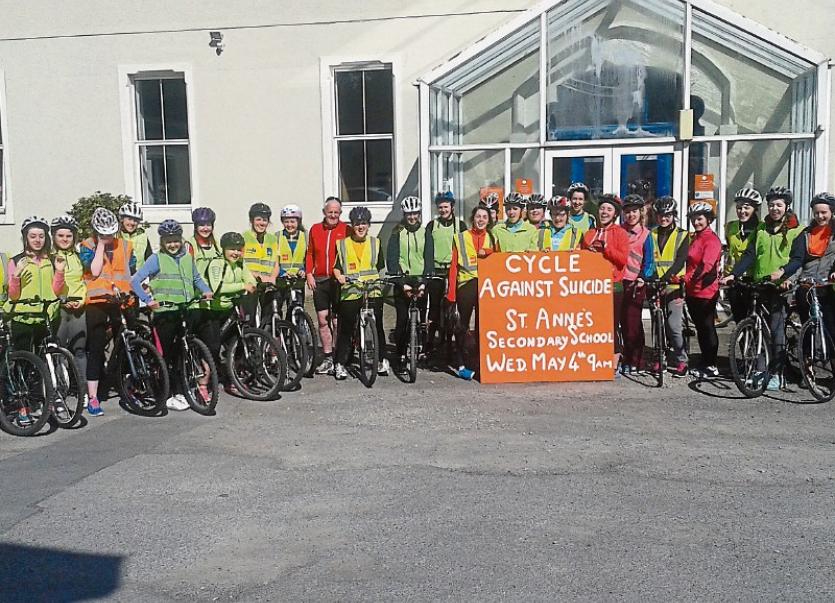 Anticipation is building at St. Anne's Secondary School in Tipperary town this week as students, teachers and members of the public eagerly gear up for Cycle Against Suicide which will be making its way to the town next week.

St. Anne's was officially unveiled as an anchor school as part of the campaign earlier this school year following a monumental awareness initiative that took place throughout the school in 2015. Now their efforts have paid off as an estimated 500 cyclists will descend on the town with another 500 well wishers, students and members of the public ready to cheer on the passing cyclists.

The 500 cyclists are set to arrive to the school on Tuesday evening before meeting their host families who will provide accommodation for the night. Then on Wednesday morning, a total of 38 St. Anne's students and their teachers from the school will join the team and kick off the next leg of the race completing a 38km cycle to Clonmel. Most importantly a selection of local services and support groups will also be in attendance at the school on Wednesday morning as part of a showcase to raise awareness of what support services are available in the area. Representatives from C-Saw, Living Links and See Change as well as displays from Aware and MyMind will be in attendance on the day.

“Our aim is that when the cycle moves on, the impact that the few days will have on the town, students and their families will remain. We want to create an environment where anyone struggling with anything will know what services are out there in the local community through the relationships we’ve formed," explained St. Anne's Link teacher with the project Miss Ryan. Last year Miss Ryan completed almost 1,000km as part of the campaign racking up two 50km runs and cycling 900km over a two week period.

Throughout the year, the school has been working towards a positive mental health initiative with artwork displays, fun music Fridays, positivity notice board, a social media campaign, songwriting classes, mentoring system among students and 'Positive Post-It' morning all grabbing the attention of the students who Miss Ryan says are a “real driving force” behind every project.

Fifth year student Meave Richardson from Tipperary town has been expertly leading the social media campaign for the school and encouraging all members of the community to get on board and line the streets of Tipperary next Tuesday to greet the weary cyclists. Maeve, who has actively worked on promoting positive mental health through her involvement with her local Comhairle na nOg said says she can already notice the difference the campaign has had on her fellow students.

“The attitude in the school has changed. There isn’t that divide between the different years as everyone is working for the same goal and positive about the same thing,” she said.

One of the artists behind the many Cycle Against Suicide posters and signs which grace the town is sixteen year old Aoife Ryan from Dundrum who says the knock on affect the campaign has had is twofold through “raising awareness of the issue of suicide as well as bringing all students closer together.”

Members of the public are asked to be vigilant that parking restrictions will be in place on Tuesday 3rd and Wednesday morning 4th of May at St. Anne’s Secondary School and Rosanna Road however stewards will be directing traffic. Cyclists can also register on the morning of the cycle at St. Anne’s to continue with the school on the next 38km leg of the cycle to Clonmel. The event is open to all members of the public.