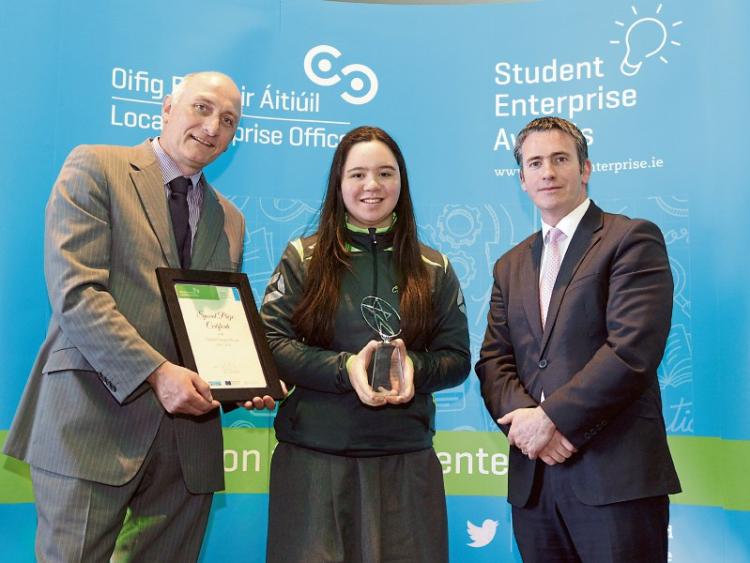 On Wednesday 20th April Aisling Meehan, a first year student at Our Lady’s Secondary School made history by being recognised at the National Student Enterprise Awards in Croke Park for her company ‘The Claw Bag’.

This was the 14th Annual Student Enterprise Awards National Final which saw 201 student entrepreneurs from 69 schools showcase 76 different student enterprises, across Junior, Intermediate and Senior Categories. A record-breaking 22,000 students from 620 schools took part in the programme this year.

Aisling was participating in the Junior category which is solely for first year students. She was not only representing her school but also Tipperary at this grade as she had previously won the Regional Final in Tipperary Institute Thurles. Aisling has produced a gear bag that has a uniquely designed internal mechanism for holding your hurley. She came up with the idea as she had always watched people struggling to carry all their gear as well as recognising that hurleys going missing from where people had placed them but by producing her idea it would mean that the gear bag and hurley would not be separated. Taking her target market into consideration Aisling has designed two bag sizes, one for Juvenile players which is priced at €25 and one for Senior players priced at €30.

On the day Aisling had to present a 35 page report, design a display stand and be interviewed by 3 judges. She talked passionately to everyone about her product and received just honours by winning the award for ‘Best Innovation’. This is a fantastic achievement for both the school and Aisling as the standard of products on the day was of the highest standard.

If you wish to order a bag from Aisling you can contact her through any of the following methods: www.theclawbag.com, email theclawbag@gmail.com or on Facebook @The Claw Bag.

Well done to Aisling and to her teachers, Ms Emma Fogarty and Ms Caroline Kinane who run the after-school Business club at Our Lady’s