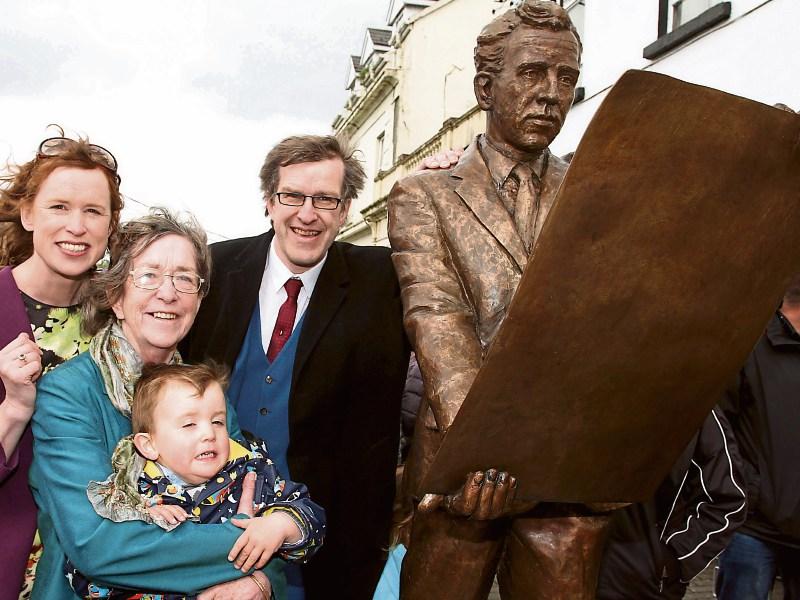 Cloughjordan honoured the memory and legacy of poet, patriot and educator Thomas MacDonagh over the Bank Holiday weekend.

One of the highlights of the weekend was the unveiling of a lifesize statue of MacDonagh on Main Street by the executed Easter Rising leader's granddaughter, Muriel McAuley, and her young grandson, Matthew Drysdale.

Ms McAuley told the gathering she was “chuffed” to be in Cloughjordan for the unveiling of Mark Rode's work, which, she said, was an accurate portrayal of her grandfather.

Cloughjordan was en fete for Monday's unveiling, with hundreds of people, many of them dressed in period costume, taking part. John Kennedy, who read the Proclamation for the 50th anniversary in 1966, once again read the Proclamation in Irish. The parade was led by the MacDonagh Pipe Band from Templemore, along with Tipperary ONE, who sounded the Last Post and Reveille as the tricolour was hoisted beside the statue.

The chair of the MacDonagh Commemoration Committee, Jim Casey, thanked all those who had been involved in the events and spoke of how delighted he was to see so many of the MacDonagh family in Cloughjordan. Also attending the events were MacDonagh's great-grandchildren Paul McAuley, and Michelle Drysdale (McAuley).

Also among the speakers were Tipperary County Council Cathaoirleach Cllr Seamus Hanafin; Nenagh MDC Cathaoirleach Cllr Ger Darcy and Minister for the Environment Alan Kelly, who spoke of how important is was to honour the patriot in his native village. He was delighted to have been asked to speak in March at Jacobs Factory where MacDonagh was in command.

Meanwhile, this Tuesday, May 3, around 60 people paraded from the MacDonagh Heritage Centre to the statue at 3.30am to mark the exact day and time on which MacDonagh was executed. Sixteen candles were placed around the statue to signify the 16 volunteers who were shot. This was followed by two minutes' silence after which Tom Williams sang the Thomas MacDonagh Song.

Meanwhile Michelle Drysdale recalled her great-grandfather at a talk on Sunday, May 1, in the heritage centre, entitled Married to MacDonagh.

Ms Drysdale gave a witty yet ultimately tragic account of MacDonagh, his wife, Muriel and their two children Donagh and Bairbre, recalling that one year after MacDonagh had been executed, Muriel died in a drowning accident off Skerries, County Dublin, leaving the children orphaned. They had a “tough life”, spending time in foster care and even coming to Broadford in County Clare for a while as well as attending St Joseph's School for the Deaf in Dublin. Even Muriel's life after MacDonagh's ececution had been tough as he left her in poor circumstances and she had to leave the family home and move into a flat.

Her talk involved a pictorial backdrop using photgraphs that gave an amazing insight into the life of an ordinary man who lived an extraordinary life.

She recalled that it had taken her a while to “get this guy”.

“I knew he was a dreamer, a visionary and had done something important for Ireland,” said Ms Drysdale, recalling she had what she described as a “lightbulb moment” while visiting neighbours.

Michelle told how MacDonagh had met his future wife, Muriel, at St Enda's School in Rathfarnham, but that at the time he was infatuated with someone else and she already had a boyfriend. However, when MacDonagh's marriage proposal to his would-be fiancee was rejected, causing him to throw an engagement ring he had bought into the fire, he accepted his fate and found love with Muriel, who ditched her boyfriend.

She described him as a “charismatic and charming man” who had got around Muriel's mother, who was Church of Ireland, even though the first time he arrived at their house he was wearing a kilt.

Ms Drysdale's description of the wedding day could have been scripted by a Hollywood romcom writer. A short telegram was sent around notifying the small number of guests of the wedding; Patrick Pearse was to be the witness but he failed to show up and they had to ask the verger to stand in. Then Pearse accidently stumbled upon the baptism of Donagh three years later when he popped into the church to say a prayer and became his godfather.

Ms Drysdale said that while her great-grandmother had not inially been interested in nationalism, she had a community spirit that saw her involved in helping the poor through handing out what were penny dinners. She later got involved in the anti-conscription movement.

She said her great-grandfather would have been proud of the weekend events in Cloughjordan and paid tribute to local historian and teacher, the late Roche Willimas, for keeping the MacDonagh legacy alive locally.