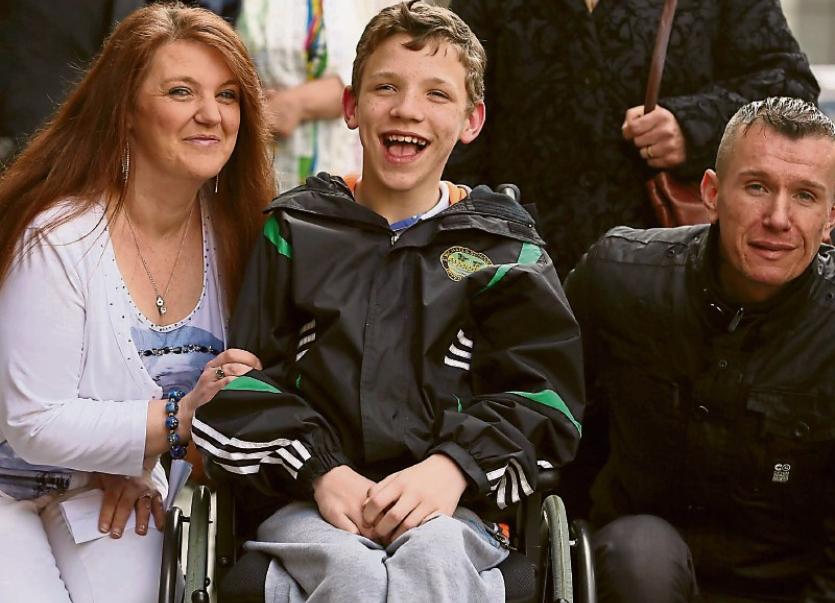 South Tipperary General Hospital has apologised to a 12-year-old Donohill boy with spastic quadriplegia and cerebral palsy who was catastrophically injured at birth.

Aaron Hanrahan, whose speech and language therapy services stopped two years ago due to health service cuts, will also receive an interim payment of €3.5 million under a settlement of his High Court action against the HSE, the High Court was told .

Outside court, Aaron's mother Marianne Cunningham, in a statement on behalf of herself and her partner Peter Hanrahan, said they were delighted and relieved their lengthy battle for justice for their son had been achieved.

“Aaron suffered irreparable damage and because of this he will remain dependent and in need of constant care and attention for the duration of his life,” she said.

The written apology from the HSE and hospital came before Aaron’s 12th birthday and was “a brilliant present for him to receive”. said his mother.

In the statement his parents said “even though we realise the great injustice done to our son, we as parents are fulfilled in the knowledge that all Aaron’s needs and requirements will all be provided for his entire future”.

“We can now look forward to a much improved but, more importantly, a much deserved, quality of life for our beautiful son.”

Earlier, in court, Brian Foley BL, for the HSE, read an apology on behalf of South Tipperary General Hospital to Aaron and his parents, Marianne Cunningham and Peter Hanrahan, Alleen, Donohil, Co Tipperary.

The apology said the hospital wished to “sincerely and unreservedly apologise for the catastrophic injuries suffered by Aaron at the time of his birth and the tragic outcome for him and his family”.

Through his mother, the boy sued the HSE over the circumstances of his birth at the hospital in 2004.

It was claimed the baby was exposed to unnecessary risk by delivering him at a hospital not suitably staffed or equipped with appropriate facilities to deal with premature babies.

It was claimed there was failure to expedite the baby’s delivery by caesarean section when an obstetric emergency existed.

It was also alleged that there was failure to take appropriate or timely actions when a cardiotocography (CTG) trace was pathological, and that the CTG trace had been discontinued when it was dangerous and unsafe to do so.

Denis McCullough SC, for the family, said Ms Cunningham, when pregnant with Aaron with a June 2004 due date, was admitted to the hospital in April 2004 where a CTG recording of the foetal heartbeat started at 8pm on April 18th 2004 and continued until after 10pm.

It was claimed the trace from 9pm was abnormal. The CTG was recommenced after 11.30pm and was pathological and the trace was turned off after midnight to enable the mother to sleep and restarted just before 6am.

Aaron, who has six siblings, is confined to a wheelchair but is a bright and cheerful boy who attends his local school, counsel said.

Due to cutbacks in the health service, Aaron’s speech and language therapy was stopped two years ago and his communication skills had deteriorated since, counsel said. His physiotherapy sessions had also been stopped last year, he added.

, Mr Justice Kevin Cross wished Aaron and his family all the best. The case returns before the court in nine years time when Aaron’s future care needs will be assessed.