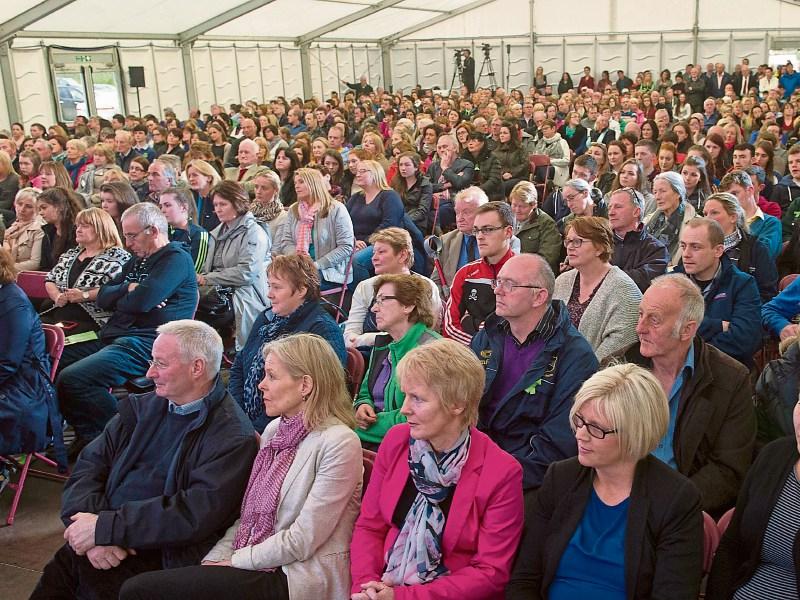 The importance now given to mental health and well-being in Irish society was underlined when over 700 people turned out last week for a public forum designed to get people talking and get people listening.

“No more wasted lives” was the theme of the meeting held in Moyglass and organised jointly by Fethard Secondary School and Scoil Ruain in Killenaule with the support of Coolmore and the co-operation of many state and voluntary agencies.

An impressive line-up of speakers inspired the massive attendance, which filled a marquee and spilled out into the community hall in Moyglass, with their stories of mental health issues and how they have overcome and are overcoming some horrific situations.

Principal of the Presentation Patrician Secondary School in Fethard, Michael O’Sullivan, said he and his counterpart in Scoil Ruain in Killenaule, Gerry McGill, decided to start something in response to what has become a “community issue” of suicide and mental health.

“We need to try and get everybody involved,” Mr O’Sullivan said. “This is the start of something and we want to keep it going and continue it.” In relation to the prevalence of suicide in Ireland, and local tragedies, he pointed out: “Nobody is immune to it. Even if it wasn’t somebody directly belonging to them, the fact that it’s happening in the community… I wouldn't say it's any worse than a lot of other places around the country but I’d say this area has certainly had its unfair share of tragedies in recent times.”

Gerry McGill of Scoil Ruain said one of the things they hope to achieve is “to bring the two communities together” and jointly raise awareness of mental health. “We’re hoping both schools might be able to drive it… The amount of agencies we have and the amount of goodwill and power we have in the room, that alone in itself is a tremendous achievement.”

Panellists included Fethard musician and DJ Roger Mehta who spoke of his addiction problems in the past and his Harmony Programme which deals with drug and alcohol awareness in prisons and schools; Alice Leahy of the Alice Leahy Trust who has worked with homeless people in Dublin for over 40 years and is also from Fethard; singer and campaigner Niall Breslin (Bressie); former rugby international Alan Quinlan from Limerick Junction; and former Tipperary and Mullinahone hurler and current drugs and alcohol counsellor John Leahy. Chair for the night was Fran Curry of TippFM.

Many hearts were touched by the contribution of Nicole Ryan from Millstreet in Co Cork, who spoke about her 18-year-old brother Alex Ryan, who took a synthetic drug at a house party in January, suffered cardiac arrest and died five days later in hospital.

Nicole and their mother Irena were at his bedside when Alex died, after his organs were donated, saving four other lives in the process.

“They all walked out of the hospital and my brother died,” Nicole Ryan said.

She described her late brother as “larger than life and a really great person” and emphasised that what happened to him, when he suffered a cardiac arrest after taking a synthetic drug, could happen to any young person. “When you’re young, you think you’re invincible.”

The drug 25I-NBOMe is sometimes referred to as “N-bomb” and mimics the effects of LCD and methamphetamine.

Speaking about mental health, Nicole Ryan said that she never thought she herself would suffer from insomnia and panic attacks, but has done since Alex’s death. Her new campaign “helps me to deal with his loss”.

She has started an awareness campaign in memory of her brother, Alex’s Adventure of a Lifetime, “basically to educate people about synthetic drugs, because it’s an underlying problem… The reality is that they are dangerous, we don’t know what’s in them… If I could save one person’s life by persuading them not to take drugs, that would be incredible.”

Lisa Kavanagh from the Tipperary Education and Training Board said they are trying to introduce the Jigsaw programme to the schools, bringing together personal, social and health education as well as developing social skills and spiritual development.

It’s important, she said, for young people to be able to access mental health services within a short timeframe, when they need them. “We want them to reach out and talk to somebody.”

Organisers paid tribute to Coolmore for backing the initiative and senior management present at the meeting included John Magnier, JP Magnier and Christy Grassick along with Maurice Moloney who put a huge amount of time and effort into organising the event.

“We hope going forward to keep these agencies together,” Maurice Moloney said. “We hope to keep these societies together and we feel we can use this as a lobby to go after the powers-that-be because we’re not going to solve the problems on our own.”