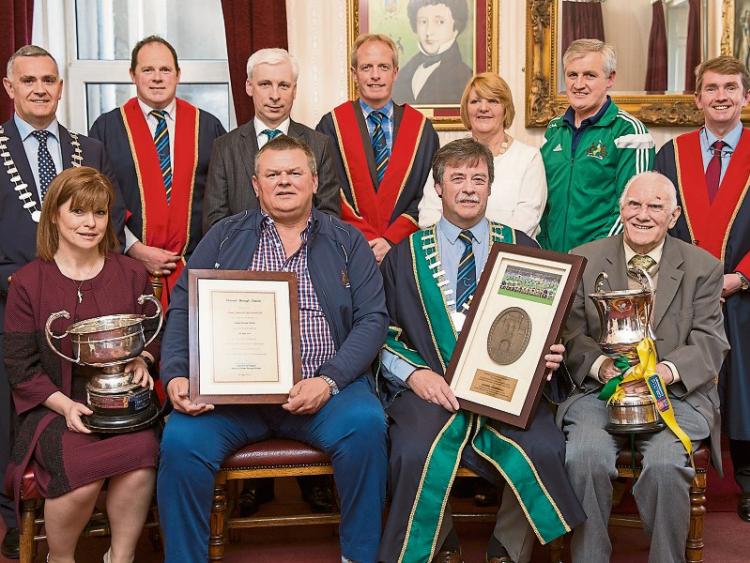 A historic year for Clonmel Commercials Gaelic Football Club, in which they became the first-ever club from County Tipperary to win the Munster Club Senior Football Championship, was recognised with a civic reception on Friday night last in the Town Hall.

At a well attended function, the Mayor of the Borough District of Clonmel, Cllr. Pat English, accorded the council’s highest honour on the club in recognition of their magnificent victory over Nemo Rangers in the Munster final played in Mallow on Sunday, 29th November, 2015.

In his address the Mayor said “2015 was a unique and proud year for Clonmel Commercials. The excitement and pride your achievements have brought to Clonmel cannot be understated; your club was the talk of the town, county and country.”

He added “You are history-makers and Clonmel is so proud of each and every one of you.”

And while the official motion of the occasion may have been specifically in recognition of the achievement of the team of 2015 in finally bringing the Munster title to the Premier County for the first time, the Mayor and the others speakers on the night extended their tributes to all club members who have contributed throughout the club’s 82-year history.

He continued “This club has been part of the fabric of this town since 1934 with many famous players and victories achieved since the club’s foundation.

“There is a healthy image of football in the Clonmel area and this is down in no small way to the people who crusaded at Commercials for many years, people like John McNamara, Tom Pollard, Timmy Ryan, Mick O’Connell, Hugh Daly, Mick Egan, Brendan Power.”

In turn, the chairman of Tipperary County Council Cllr. Seamus Hanafin, and Cllrs. Andy Moloney, Michael Murphy and Micheál Anglim all spoke in glowing terms of the great work and achievements of the famed Clonmel club, past and present, acknowledging that the success being reaped on the playing fields today is a result of the selfless service and effort made by an army of volunteers, mentors and players over many years.

The array of silverware won by Clonmel Commercials over the past 12 months was displayed on the top table, eight cups in all, with the Michael O’Connor Cup pride of place. Indeed Cllr. Moloney joked that it was “like Duggans Jewellers” so impressive was the display.

Club chairman, Derek Williams outlined how since Clonmel Commercials Gaelic Football Club was founded in 1934, it has become such a significant part of the sporting life of Clonmel.

He said “Currently the club boasts over 300 players from under 8 to seniors with girls teams fielding from under 8 to junior level. Commercials field in the ‘A’ grade in every competition they play in, while they field more than one team in many grades. The club is one of the most successful in County Tipperary and this is due to the incredible hard work done by the club’s coaches who dedicate huge time and resources to coaching the young players of the club.”

“The seniors capped off an already wonderful year with county and Munster titles. The final whistle after the Munster final unleashed scenes of unbridled joy as history had been written and finally after 50 years of trying, the club were crowned Munster champions. A lifetime of work and dreaming of this moment had finally brought the club to the next level, said the Commercial chairman.”

He added: “It is only fitting that tonight former players, mentors, chairmen, club groundsmen, etc., are recognised on this prestigious night as well. This great club is only as good as its membership and 2015 has tightened the bond between us all.”

Team manager, Charlie McGeever, reviewed the campaign from victories in the county final over Moyle Rovers, to wins over Newcastle West, Miltown Malbay, Nemo Rangers, the win in Ruislip, to the heartbreak of losing against Ballyboden. But looking forward he asked “where does that leave us now? Getting to or near the top is difficult but the hardest part is staying there and that is what we must aim for now, to go further.” McGeever has raised the bar of expectation for his talented panel and also for other clubs in County Tipperary to match.

Stating that it would be impossible to thank everyone he did make a point to thank those external to the club and especially those who helped with financing club affairs - “Brian Acheson (Dornans), Alan Maher (Londis), John Kennedy Motors and AIB (in club championship).”

Throughout the course of the evening each speaker singled out the lifetime dedication of John McNamara to Commercials, one synonymous with the other now.

Cllr Andy Moloney referred to John’s legendary sideline presence “some being more vocal than others and we all know who they are” (to wide applause); Cllr Michael Murphy described ‘Mac’s’ commitment to the club as “an immeasurable, indescribable contribution”; while team manager Charlie McGeever greatly valued his presence around the team and bemoaned that the one day he was unavoidably absent was the day against Ballyboden.

But the Mayor, Cllr English, in making a special presentation to John McNamara and his wife Maureen at the end of the night fittingly described him as “Mr Commercials himself”. No one could argue with that, not even John himself, for once lost for words.