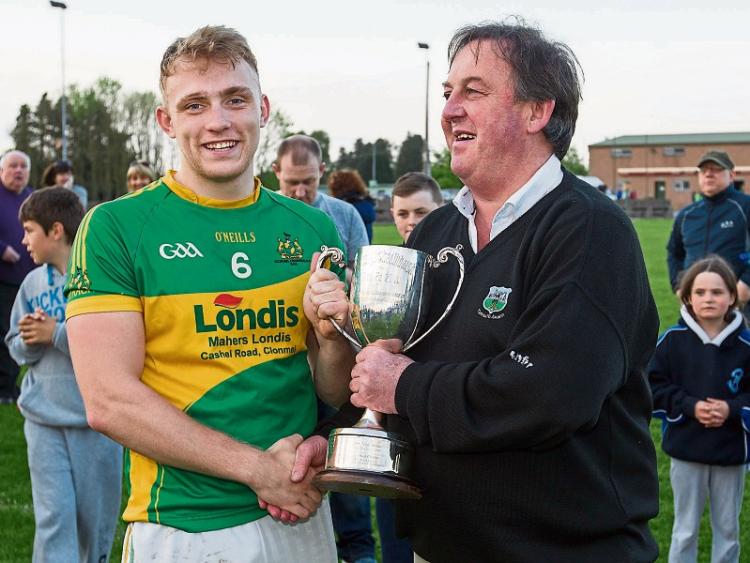 A four-goal blitz in the space of fourteen first-half minutes ultimately decided the destination of this year’s county under 21 ‘A’ football championship final played at Leahy Park, Cashel on Saturday evening last.

Between the 12th and 26th minutes, Clonmel Commercials’ slick forwards tore Drom/Inch apart four times with four goals and thereafter there was no way back for the highly-rated Mid Tipperary outfit.

Having met in two recent county minor finals, 2013 and 2016, with a victory apiece, this under 21 final was greatly anticipated to be a close call. However, as a spectacle it disappointed, Clonmel Commercials’ half-time lead of nine points was never really threatened in the second half and from a long way out their historic three-in-a-row of county titles looked well secured.

The early exchanges were even, Drom/Inch if anything looking the fitter and more dangerous in attack and after eight minutes it was a point each, Paudie White’s opening free cancelled by a fine point from 40 metres by Drom/Inch’s talented midfielder Tommy Nolan.

In the eighth minute Commercials’ Michael O’Reilly - who was a threat all evening - got in behind the Drom defence only to be taken down for a penalty. Much to the relief of Drom/Inch, Ryan Lambe’s penalty crashed back off the crossbar but the signs were already ominous.

Michael O’Reilly's fine point was in turn levelled by Brendan Larkin’s free for Drom, and with 12 minutes gone and locked at 0-2 each, an exciting final looked in prospect.

But it all changed very rapidly. A four-man move started by the influential Jack Kennedy was well finished by Padraig White in the 12th minute and almost immediately Kyle Peters sent Calvin Boland on his way with a straight line burst to score a second Commercials goal within 60 seconds.

A stunned Drom, victors over West champions Arravale Rovers in the semi-final, to their credit hit back in the 16th minute with a goal of their own, Paul Kennedy sending Stevie Nolan on his way and cutting in from the wing Nolan burned the Commercials defence to pull the game back to 2-2 to 1-2.

It was to be the briefest of respites. From the kick-out Padraig White got possession for Commercials and linking up with Richie Gunne sent the powerful running Calvin Boland off again for his second goal of the evening.

A fourth goal for the South champions four minutes before the break was the final nail in the Drom coffin. Jack Kennedy putting Padraig White through and his pass was finished excellently by Michael O’Reilly.

In between the flood of goals, Kevin Hassett kicked a superb point from 45 metres for Drom but Paudie White had the final point of the first half to put Commercials nine up (4-3 to 1-3) at half-time.

In last year’s under 21 final Commercials came from 10 down at the break to defeat Loughmore/Castleiney; this time Drom/Inch would need a similar miracle. But the unlikely never looked a possibility with some bad early second half wides denying Drom any vital momentum.

Indeed, Michael Nugent had the first score of the second period, a well-taken effort from 35 metres to stretch the advantage to 10.

In fairness to a young Drom side they stuck to their task and three unanswered points (from Colm Kinane and two frees from Mikey Connors and Stevie Nolan) got it back to seven, but that was as near as they came. In the final quarter the reigning champions outscored their opponents 0-3 to 0-1; White (free), Boland and Kennedy on target for Commercials, with a well-worked point by substitute Pauric Campion six minutes from the end Drom’s last score.

For Commercials their captain and county senior player Kevin Fahey was a rock at centre-back, fortified by a safe Liam Ryan at full. In the middle Jack Kennedy and Ross Peters won the most possession, Kennedy’s aerial influence significant all through. The forward unit as a whole had Drom in trouble in every attack, but White, Boland and O’Reilly in particular looked most lethal.

Drom who had stopped Commercials’ bid for six-in-a-row of minor titles last year will obviously be very disappointed at that disastrous first half period where they lost their shape completely and paid dearly for it. The final scoreline on the night didn’t truly reflect their performance or their ability. The likes of Tommy Nolan, Jamie Bergin, Mikey Connors, Michael Campion couldn’t be faulted. The Mid club are definitely on the up as a force in Tipperary football.