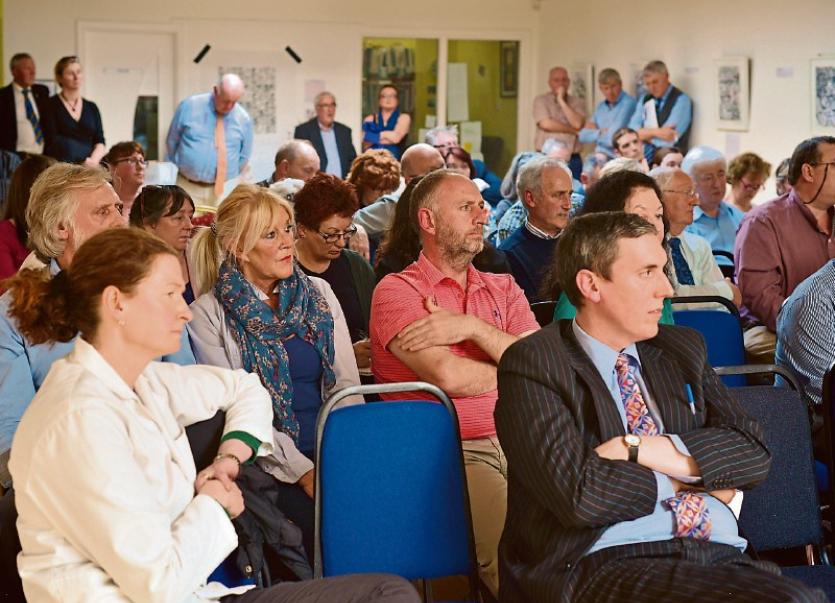 A meeting to unveil a new town centre strategy for Tipperary town was used by the business community to express their anger over commerical rates, parking and other issues they were concerned about.

Up to one hundred and fifty retailers, business people and members of the public highlighted the major issues that they felt had negatively impacted the town.

The plan, presented by Kathleen Prendergast, EconomicDevelopment Officer with the County Council, was met with some enthusiasm but issues such as commercial rates, parking, and the condition of Main Street were raised.

Business woman Siobhan Costigan said she would like to get involved in the new strategy plan. She said the Council were putting the onus back on the retailers to revitalise the town whilst huge fundamental issues were being ignored by the council.

“You want us to help you but what are you doing to help us?” she asked .

Ms Costigan of Costigan’s Pharmacy said they were building a new €750,000 medical centre in the town. She said everything was ready to go and new jobs would be created. She told the meeting that she had received a €63,000 bill from Tipperary County Council for parking contributions and asked how was that helping a new development or new industry.

Anthony Foley said there was not much point in a marketing plan for the town until such time as new industry was brought to the town.

New industry would bring jobs and people with money to spend and that needed to happen before such plans were relevant.

Mr Foley said he believed Tipperary town was taken off the IDA list three years ago which would make it more difficult to secure new industry for the town.

Noel Corcoran said not one job had been created in the town since the launch of Connect Ireland in 2015 and he wanted to know what the County Council were going to do about that.

Mr Corcoran said he was born and reared in the town and it was clear to him that businesses in the town were struggling to stay open.

Eamon Ryan from the Porter House said it was all very well for the Council putting money into this marketing consultancy but asked if i twas rate payers money that’ was paying for it.

Tony Walsh said commercial rates were too high in the town. He wanted to know how much the plan cost and when informed the plan for nine towns in the county cost €55,000, he described it as a “pittance”.

Maureen Walsh brought up the issue of the Tipperary hostel and said what a huge asset it would be to the town if it was up and running.

Siobhan Ryan asked the meeting if the new strategy plan was specifically directed towards Tipperary town or was it generic with the other eight major towns included in the report.

Economic Development Officer Kathleen Prendergast told the meeting that the main purpose of the Town Centre Strategy was to help restore vibrancy and vitality to the retail areas in the centre of the major towns.

She stated that that the commerical rates could not be changed. “It is a point of law and legislation and there was nothing that can be done to change it,” she said.

She highlighted the development and establishment of strong town centre partnerships and explained how Retail Excellence Ireland in their publication “Strategy for Rural Retailing” advocated the importance of town centre groups to stimulate positive change for their towns.

It suggested that these groups should comprise local stakeholders from across the public, private, voluntary and community sectors. These groups would then be responsible for the implementation of the action plans devised in the Town Centre Initiative with the ultimate objective of increasing footfall and commercial activity in the town centres

The attendees were asked to sign up for groups projects that included Tourism, Culture & Heritage and Town Marketing & Festival/Events.

The Council will hold another public meeting in 6-8 weeks with the results of these questionairres.