Revealed - Rita was the hurling fan in photo with legend Ring 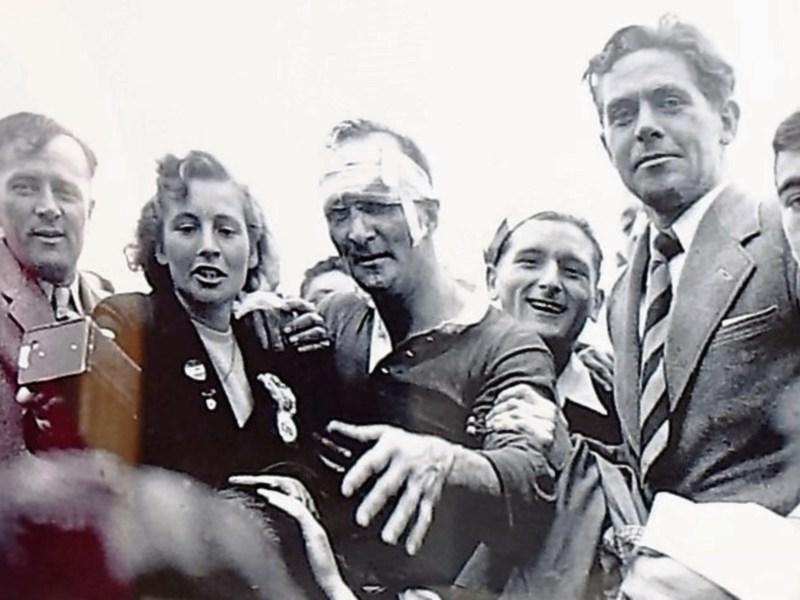 The sixty four year old mystery surrounding the identity of the woman who became known as the Blood and Bandage Lady after she featured in an iconic GAA picture alongside a battle torn Christy Ring has been resolved.

The historic picture was taken after the 1952 Munster hurling final when hurling legend Christy Ring inspired Cork to defeat three in a row champions Tipperary.

After the game a bandaged and blood stained Ring is seen leaning on the shoulder of a woman who is trying to capture the moment with her own box camera. The picture was published in the Cork Examiner the next morning and has hung in Pairc Ui Rinn but until now the woman's name had not been known.

The connection to the mystery woman, who celebrated her 89th birthday on Saturday, was made through the work of family friend and former secretary of the West Tipp GAA Board Jerry Ring.

A native of Ballygarvan in County Cork, Rita Lowry (nee Fenton) worked with Musgraves in Cork city for a few years before moving to Tipperary town in 1948 to work in the post office.

“I brought my bicycle and my hurley to Tipp with me. I started playing hurling on the green in St. Patricks Avenue and when other girls joined me we decided to start up a camogie club in the town,” said Rita.

Rita founded the Sean Treacy camogie club and she went on to be picked by the county camogie selectors. She played in her own Munster final for Tipperary against her native Cork in 1952, the same year as the famous Ring picture was taken.

She met and married John Lowry (RIP) and her home at Fawnagown just outside Tipperary Town is a shrine to hurling.

On visiting her home on Monday afternoon, Rita was preparing to cut out the match reports from the daily papers on the Tipperary v Cork game the previous day .

She has an incredible GAA archive contained in over a dozen huge ledgers she has used as scrapbooks since the late forties to record the great games, players and events at local and national level .

Rita said Sunday's match between Tipp and Cork was “awful” to watch. She was not a fan of sweepers and much preferred the old style “man to man” hurling.

Long before hurling sweeper systems were spoken about or anybody even heard of selfies, Rita brought her camera to all the matches.

She remembers the day in Limerick in 1952 very well and explained that she was passing her camera out to a friend to take a picture of her with her wounded hero.

She struck up a friendship with Ring and he would often inquire from her - “How did I get on yesterday”- to get her opinion on the matches he played in.

She was quick to point out they were just friends, no romance involved.

“Good friends, Sure everyone loved Christy”

“Everybody loved him.You would go to the end of the world to see him play. The crowds he brought to the matches were incredible”.

Ring sent her letters and Christmas cards over the years but she burned a lot of them when she married.

“Not that there was anything in them to be hiding”, she laughs. Hurling has been her passion all her life and Rita, who has twenty one grandchildren, has taken great pride in watching all her family play Gaelic games.

Her three boys Jimmy, Johnny and the late Martin all played football for Tipperary at various grades. Her grandson Tommy was on both Tipp minor panels that reached the All Ireland finals last year and she was very proud to see Tommy captain the Abbey CBS to win the All Ireland SHC ‘B’ title in Semple Stadium earlier this year.