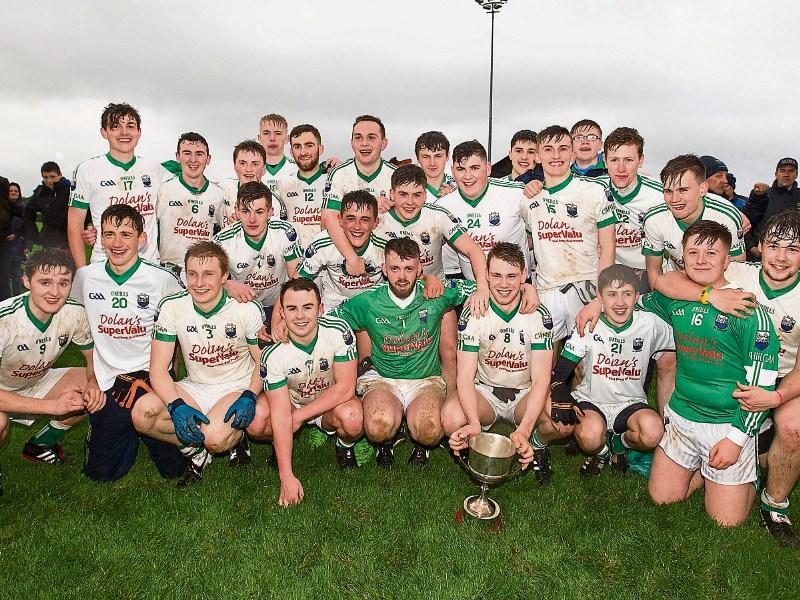 Cahir are county under 21 ‘B’ football champions for the second time in three years after edging out Golden/Kilfeacle in a tight free-ridden final at New Inn on Friday night last.

A 59th minute free by captain Liam Casey from 40 metres tipped the balance in favour of Colm O’Flaherty’s side at the very end of a game that ebbed and flowed. But spare a thought for a gallant Golden/Kilfeacle side who battled bravely having had their star player, county senior panelist Josh Keane, dismissed midway through the second half. It was for a self-inflicted yellow card then black card combination for which Keane can have no complaints; it ultimately cost his side at least extra-time in the end.

On a dull wet night which made flowing football difficult, notwithstanding the 53 frees awarded, Cahir had a most fortuitous start after only three minutes. Liam Casey’s innocuous long ball into the Golden area was fumbled by the keeper and the in-rushing Conor Cashman touched home.

The West champions soon settled and following two fine points from Keith Landy and Niall Fogarty they struck back with a well-taken goal of their own in the 10th minute.

A great run almost the length of the field from centre-back Shane O’Connell set up Andy Byrnes and he drove low past the Cahir keeper to put Golden/Kilfeacle ahead for the first time at 1-2 to 1-1. Cahir’s other point coming from a close-in Ian Flannery free.

Buoyed by the goal and the stiff breeze behind them, and with Josh Keane and Shane O’Connell (playing with a broken toe) excelling, Golden stretched their lead with three points in a row. Seanie O’Halloran came all the way across the field to get on to his favoured left leg and point, before Andy Byrnes fly-kicked a point off the ground. A free from O’Halloran then put Golden 1-5 to 1-1 ahead after 23 minutes as Cahir clearly struggled.

Cahir who went 18 minutes without a score finally tagged on a point five minutes before the break, when a good move involving Aaron Murphy and Liam Casey got Alan O’Connor free to leave the half-time score at 1-5 to 1-2 in favour of Golden.

A rapidly darkening evening necessitated a switch-on of the floodlights at half-time and with it Cahir’s prospects also brightened.

While a Seanie O’Halloran three minutes in to the second half stretched Golden’s lead to four, suddenly Cahir got to grips with the game and in a five minute spell scored 1-3 without reply to regain the initiative.

The advantage of an accurate long-range freetaker on a bad day is precious, and at either end of the mini-rally Liam Casey kicked two sweet 45 metre frees off the ground and over the black spot.

The vital second goal for Cahir came eight minutes after the restart when some great work by Niall McKenna in the build-up created an opening for Ian Flannery and the full-forward beat a clearly struggling Killian Hayde in the Golden goal.

Immediately the injured keeper was replaced but Cahir kept the pressure on with once more Niall McKenna pivotal in putting Alan O'Connor through for a nice point from 25 metres.

Two points down now and playing into a strong breeze, Golden suffered a further blow when their star midfielder and captain Josh Keane, already booked, was rightly black carded by the referee; the combined red card reducing his side to 14 men for the final quarter.

Against all the odds the West side rallied and following a free from Seanie O’Halloran and a fisted point from Niall Fogarty they were back on level terms, 2-5 to 1-8, with three minutes to play.

However, just when extra time looked a real possibility, and few neutrals in the crowd would have objected, Niall McKenna won a free 40 metres from goal and once again Liam Casey (himself with strong Golden/Kilfeacle connections) slotted over what turned out to be the matchwinner.

The winners were might-ily relieved at the finish to have eked out a one-point victory on a night they didn’t perform to their full potential; their preparations with a somewhat shallow panel hampered by exams and illness. Still when put to the pin of their proverbial collars they found the vital edge. Niall McKenna was very influential and Liam Casey, after a slow start, came into it well. Others to the fore on the night were Oisin Moloney, Mikey O’Connor, Conor Cashman, Alan O’Connor and Ian Flannery.

Golden/Kilfeacle will reflect disappointingly on what might have been. Shane O’Connell was their main man throughout with Cian O’Connell also putting in an excellent hour at full-back. Josh Keane, Robbie, Thomas and David Wade, Niall Heffernan, Seanie O’Halloran, Niall Fogarty, Andy Byrnes played well and it was also great to see James Casey returning after a recent injury.