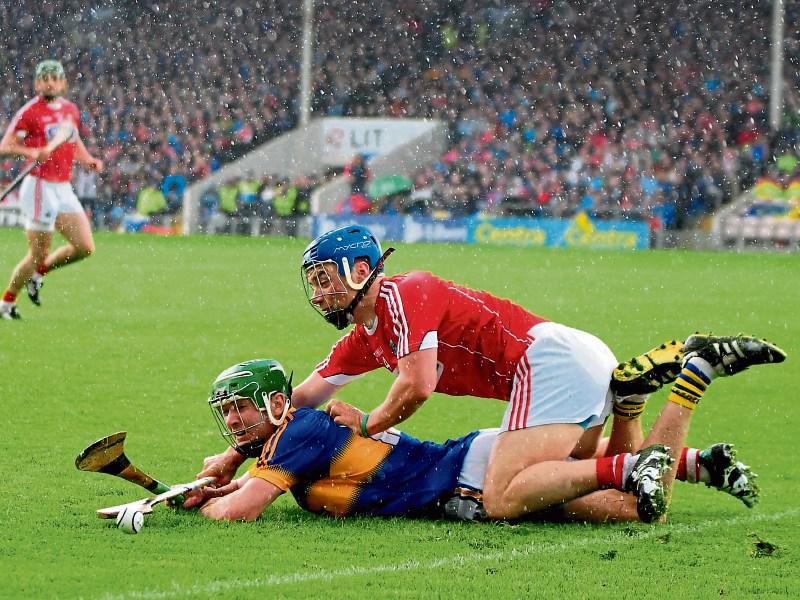 In the gallery of Tipp/Cork hurling classics this will hardly find wall space. For once the famed rivalry didn’t deliver. A dismal and drenched occasion fell woefully flat.

No matter. Tipp's season is up and running. Cork is ‘bet’ and the show moves on now to a Munster semi-final and Limerick’s visit to the Stadium on June 19.

The foundation of Tipperary’s win was laid in the first half. Cork came out all bluster and bluff. There was plenty of niggling in the early exchanges particularly, but the hurling pattern wasn’t slow to emerge.

After fifteen minutes the score read seven-one to Tipperary. Economy was a term used by Michael Ryan afterwards and there was certainly that quality about many of the early scores as Callanan and ‘Bubbles’ showed real class in their execution.

Cork’s well anticipated sweeper system saw William Egan getting on some early ball but ultimately the ploy was about as useful as a fifth wheel on a car. Cork has yet to hone this system and their obsession with trying to curb Callanan saw them lose sight of the bigger picture.

The rebels’ sweeper system simply didn’t work and a follow-on consequence was the comfort it gave to our defence, which used the extra body to mop up any threat, the Mahers in particular enjoying a field day.

Besides, Cork’s attempts to work the ball out of defence were very cumbersome. Gone are the days when they had the players to execute this running game; on Sunday they were repeatedly turned over and the Tipperary forwards popped some delightful points.

A goal would have given nice confirmation of our ascendancy but I suppose there was no need to go for a major while the minors continued to flow.

It all amounted to a nine-point interval lead with Cork managing a mere five scores in that half, a miserly three from play.

At half time we were treated to a version of the song ‘Anything Could Happen’. Was somebody trying to spook us with ghosts from the past? Lost leads often carry painful memories. The worst in my recall was in 1981, during the throes of the famine, when we led Limerick by thirteen points at half time in a Munster opener. It became fourteen early in the second half before Joe McKenna and company staged an extraordinary comeback to send the game to a replay - which we lost.

There was no such danger this time given the abject poverty of Cork’s effort. The closest they came to a mini-revival was Horgan’s goal attempt on a twenty-metre free while trailing by seven. Darren Gleeson stood firm for the block and the final quarter of the game then fizzled out to a damp squib.

It represents a new low for Cork hurling, even lower, perhaps, than their 2014 defeat at Croke Park. For those of us who grew up on a diet of Cork supremacy it’s an astonishing role reversal.

The really surprising aspect for me was the failure of their big guns in attack. Pat Horgan was substituted – even his free-taking was below par; Lehane had one characteristic run down the line in the second half but overall, like Harnedy, couldn’t gain any worthwhile traction in the game.

I suppose it underlines the importance of forwards getting quality ball, something that was in short supply for Cork on Sunday given their difficulties back the field.

The weather was atrocious but for Tipperary the sun was shining. I must admit to some puzzlement when the team was announced on Friday night. Seamus Kennedy’s inclusion was well touted during the week but Dan McCormack and especially Sean Curran weren’t part of the script. It was a bold statement by the management, one they’ll now feel was well justified.

All four debutants could be pleased with their first taste of Munster senior championship and it really ramps up competition for starting slots in the Munster semi-final.

One of the consequences of the surprise selections was that it gave us serious options on the bench and there is a general recognition nowadays that it takes around twenty players to win key championship games.

The fact that Tipperary conceded a mere eight points from play during the game goes counter to most pre-match views, mine included, about the potential of the Cork attack. Tipperary’s defence ruled supreme. The Mahers were outstanding, Paudie taking man-of-the-match and kid brother, Ronan, not far behind. Seamus Kennedy too played a solid part on that half line, one first half block and clearance earning special notice.

The full line too offered comprehensive cover for a faultless Darren Gleeson in goal. Mickey Cahill did have a busy time on Cork’s best, Alan Cadogan, and James Barry’s decision making was a bit faulty at times though overall they never looked like being breached.

Brendan Maher turned in one of his finest contributions since moving to midfield; his work rate and general involvement was outstanding. He was well supported by Michael Breen and on present evidence we appear to have a pretty stable midfield partnership.

In attack Callanan, ‘Bubbles’ and John McGrath were the match winners. One of the most pleasing aspects for Tipperary was Callanan’s form. He’s had a disrupted spring time and there were concerns about his confidence - but not after Sunday. Every defence will worry about him this summer.

‘Bubbles’ too sparkled; some of those points were sheer artwork. John McGrath did less in the scoring department but much more as creator and supplier. It’s great to see his league impact transferring to championship. Noel McGrath had less impact with just a few quality items.

Dan McCormack played a lot during the spring so perhaps his selection was less of a surprise than some think. He tends to divide opinion, some critical of his lack of scoring potential and general hurling capacity, but others highlighting his busy work routine.

Sean Curran too is shot-shy but maybe the pair brings a busyness to attack which acts as a complement to the silkier skills of ‘Bubbles’ and company. It will be an ongoing debate ahead of the Limerick game.

Being able to introduce the likes of ‘Bonner’, Bergin, Forde and O’Meara is a luxury we didn’t think we had, so maybe there was clever method in Friday’s selection. Anyway after the disappointment of the league the horizon has suddenly brightened. Let’s hope for more sunshine, literal and metaphorical, on June 19.

The intermediates made it a double whammy for Cork with Tipperary carving out an emphatic triumph in the opening contest. I haven’t been much of a fan of this grade in the past but the new approach whereby it acts as a development squad for the seniors gives it an enhanced status. We finished with twelve U21s on board so it neatly fulfils a dual mandate for William Maher.

It was tight enough in the first half though Tipperary always seemed to have the edge. The three second half goals really ‘buried’ the game. Full forward, Mark Russell, was central to all majors; he planted two and earned the ‘penalty’ which goalie, Brian Hogan, converted for the third. Untypical of Tipperary teams both Mark and Conor Kenny supplied significant aerial power in that full forward line; Cork couldn’t cope.

An amazing exhibition of free-taking by Aidan McCormack was central to the win too; he landed fourteen points in total, a dozen from ‘dead’ balls from varying distances and angles.

One of the most eye-catching displays on the team came from centre back, Tom Fox. Why he remains outside the senior loop is one of the mysteries of Tipperary hurling, especially with a management that shows openness and flexibility and had Stephen Cahill, Donagh Maher and John O’Keeffe on the bench on Sunday. Surely his time will come.

So, it was a great day then for Tipperary hurling even if the overall spectacle was poor. We’ve been part of enough pretty showpieces in the past where we came off second best so we’ll enjoy winning ugly this time. The footballers take their turn this coming weekend where they’ll be well fancied to handle Waterford.

Meanwhile there’s an important domestic hurling game that will interest followers locally. The delayed Upperchurch v. Drom/Inch county round was fixed for this Wednesday but I’ve been told it’s gone back to Friday now at Templemore. It’s a winner-takes-all fixture; the loser will have to win the Mid to re-enter the Dan Breen. It should be an interesting clash between Callanan and Barry.