Successful campaign despite capacity issues at the hospital 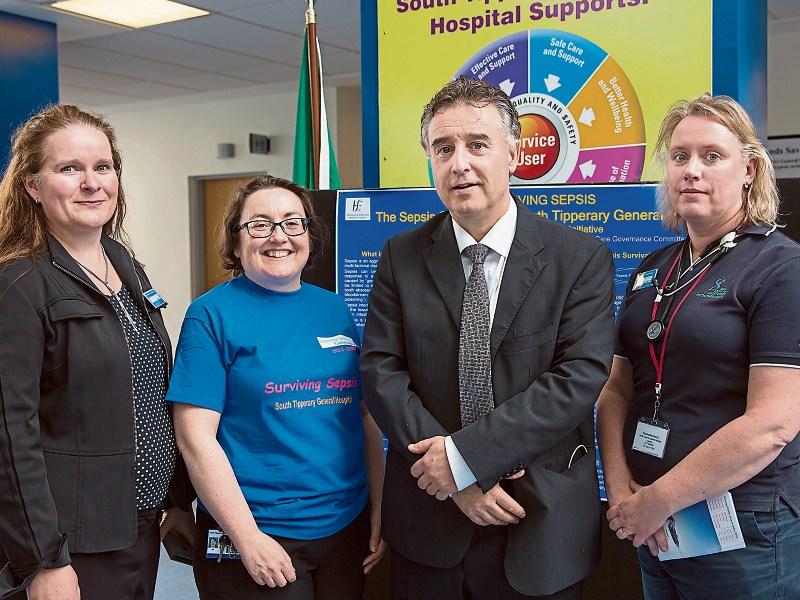 South Tipperary General Hospital reached an important landmark last Friday when it marked the fifth anniversary of the introduction of the Surviving Sepsis Campaign.

The hospital was one of the first in the country to take on the Surviving Sepsis Campaign challenge and the training, education and increased awareness among all staff of the need to put in place early recognition protocols and prompt action procedures has yielded impressive results.

Sepsis is an aggressive life threatening condition which leads to shock , multiple organ failure and death, especially if it is not recognised early and treated promptly.

Since the campaign started, the average stay in the Intensive Care Unit at South Tipperary General has been reduced from five days to 2.8 days which is beneficial to the hospital, the staff and more importantly the patient for multiple reasons .

That progress has been achieved despite the serious resources and capacity issues the hospital has to cope with every day.

Tributes have been paid to staff for their commitment to record progress in the Surviving Sepsis Campaign while at the same time having to contend with serious overcrowding and extensive use of trolleys in the A&E corridor.

“The campaign has been a success because everybody involved worked as a team, realising how important it is. It simply means patients don’t stay as sick as long. It means we can do better for our patients”, said Consultant Marcella Lazinger, the STGH Lead for the Sepsis Task Group.

She explained that the ICU bed stay was shorter now because of the work done in the wards concerning management, early detection and continued training and education of all staff.

“We don’t need to keep the patients for as long in ICU because of that excellent work done on the wards and this means we can put more patients through ICU because the stays are shorter”, she said.

Designated ‘champions’ of the campaign on the wards have played a huge role in identifying and dealing with sepsis.

They are part of the comprehensive programme put in place to deal with the issue which involves early warning systems, defined sets of actions and detailed pathway of care.

Dr. Lazinger said that the campaign started in 2010 before being formally launched in 2011 when STGH joined the international Surviving Sepsis Campaign.

It was up and running in Clonmel prior to the tragic death of Savita Halappanavar in Galway University Hospital in 2012 who died as a result of complications of a septic miscarriage.

Following the tragedy, hospital procedures for the recognition and treatment of sepsis came under more scrutiny and national guidelines were introduced.

“When that tragedy happened it reinforced our efforts. It confirmed to all of us in South Tipperary General Hospital the importance of what we were doing and that we were on the right path. Maternity had been included in our campaign and this tragedy intensified our focus on maternity”, said Dr. Lazinger.

Consultant Surgeon Peter Murchan said it was paramount that sepsis was perfectly managed in all clinical settings. He said huge strides had been made and all of the staff of the hospital were fully aware of how important it was to remain vigilant and to keep to the fore in education on the issue.

He said times were testing, there were capacity issues at the hospital and further investment was urgently required and everything was being done to maintain pressure on the HSE to resolve those issues.

Progress, she said, had been made in improving outcomes for patients as a result of the Surviving Sepsis Campaign but she acknowledged that the overcrowding problem at the hospital was of serious concern.

“Additional capacity is required. We need a solution in the short term before next winter and we need capital investment to address the issue long term. Twenty beds are neededurgently”she said.