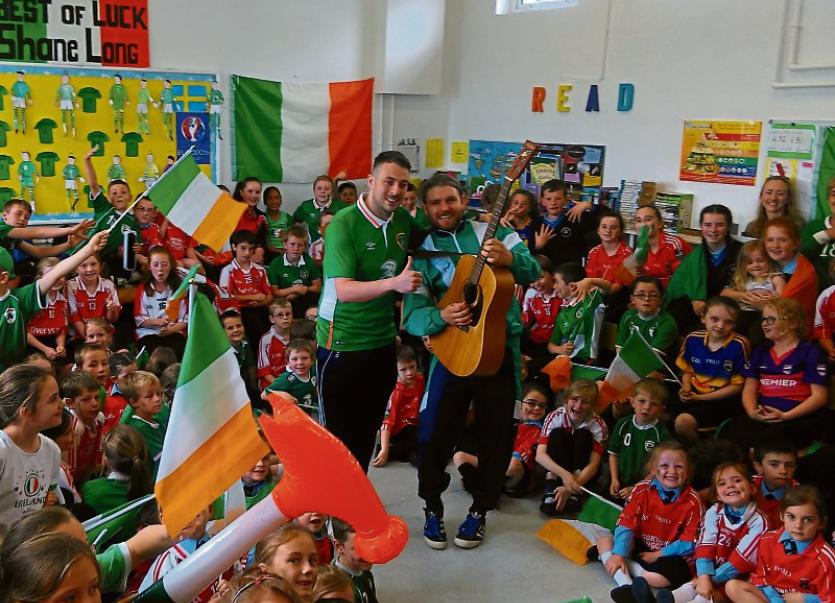 Gortnahoe N.S. are hitting all the right notes with their Euro smash the 'Shane Long Song.'

Since it was uploaded to video sharing site Youtube on June 7 the song has already garnered over 13,000 views and counting.

The up tempo number, which has also been getting radio airplay, was written by well known Tipperary singer Johnny B and recorded live at the school with a 119 pupil choir last week. The song is a tribute to former '1999 Gortnahoe Pupil of the year' Shane Long and features Shane's nephew Eamon who is a fourth class pupil at the school.

The driving force behind the project was "super-sub” teacher Monica Griffin said Principal Derek O'Brien ahead of Ireland's first game at the Stade de France.

"Ms Griffin was fantastic in getting the whole thing off the ground as she contacted Johnny B and the whole thing took off from there. We wanted to do something to mark the occasion and decided to write a song with all pupils in the school getting involved,” said Mr O'Brien.

And since recording the song Euro mania has taken over the school with all of Gortnahoe turning green. "There's a fantastic buzz in the school and it's testament to the enthusiasm of pupils, staff and parents," said Mr O'Brien who added that he hopes the song will become another great memory for the current 6th class of their time at Gortnahoe.

“Win, lose or draw we hope to get Shane back to the school and perform the song for him. He's a great role model for young people and a great ambassador for Tipperary,” he added.