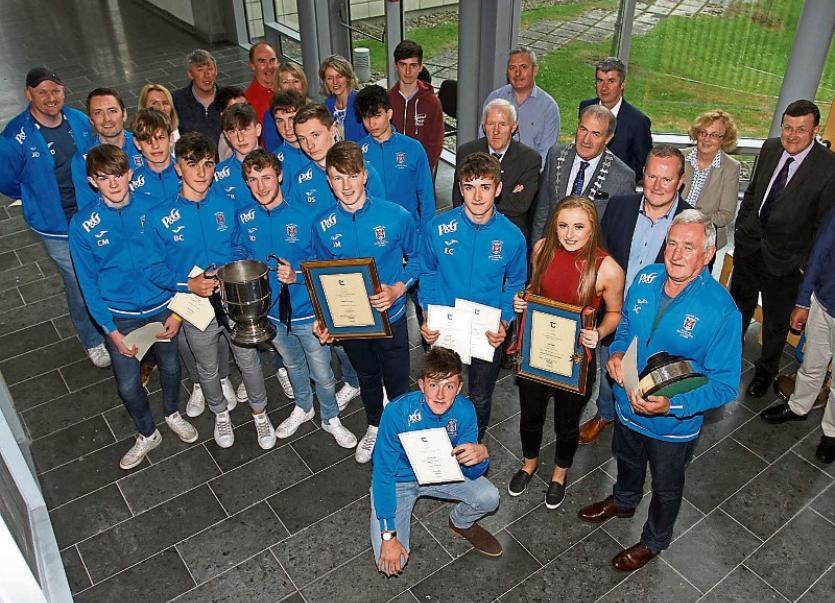 Nenagh's All-Ireland U17 soccer champions were among those honoured for their achievements by Nenagh Municipal District Council last week.

The Nenagh AFC team and mentors were honoured for winning the FAI U17 Umbro Cup, along with world handball medalist Sinead Meagher from Nenagh Handball Club, All-Ireland music champions Keelan McGrath and Colm Slattery and Dr Dan Woods for his work in developing Kilcommon Prayer Garden.

MDC Cathaoirleach Cllr Ger Darcy said of the Nenagh AFC team: “Such success does not come overnight. It is a product of long hours of training and determination and a commitment not only from the players and the management team but also from the families of those involved. We also recognise the management team of Shay Coffey, Conor Kirwan and Jonathan Delaney. “

Cllr Darcy said that Sinéad Meagher, who won gold and silver in the 2015 handball finals in Calgary, Canada, was a shining example of excellence in sport.

“Sinead’s success was even more remarkable as she had a broken finger a few weeks before the finals but her determination and never give up attitude saw her through and got her the success she so richly deserved.”

Cllr Darcy praised Fr Woods, saying he was “synonymous with the parish of Kilcommon”.

Fr Dan's work in the development of the Prayer Garden was a credit to him and the beautiful, serene prayer garden had become a pilgrimage destination for many, he said.

“The contribution made by Fr Woods to the community is enormous,” said the Cathaoirleach.

Keelan McGrath and Colm Slattery are pupils of Ned Kelly of Ballycommon CCE in the In Tune for Life Orchestra.

Keelan, 14, from Bellgrove, Borrisokane, has a number of All-Ireland firsts to his name in accordion, medodeon and composing among other areas and was Young Musician of the Year in 2013.