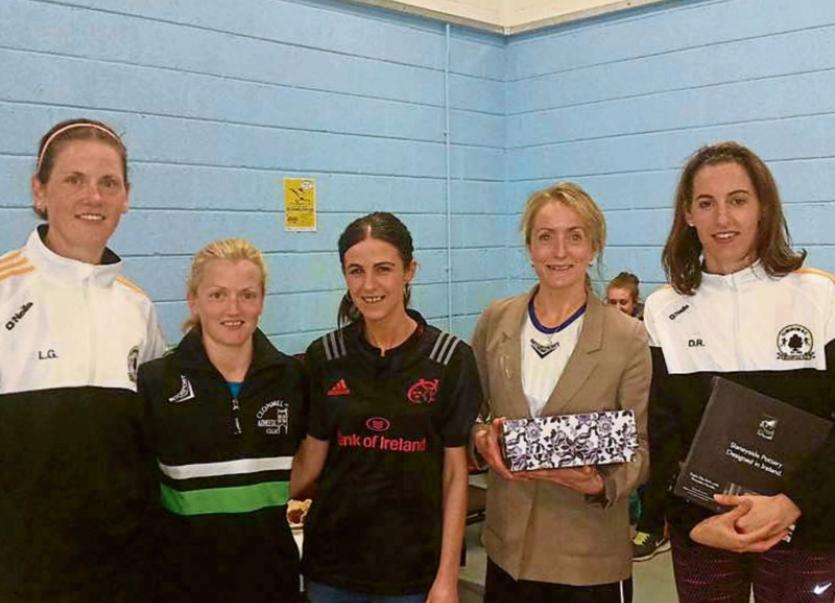 Kevin Moore of Dundrum and Aine Roche of Clonmel continued their fine form on the roads with impressive victories in the men’s and ladies races at the Dave Fogarty Memorial four mile road race organised in Thurles last week by Croke AC.

This is probably the most testing four mile run anywhere, (the Leugh circuit), with challenging hills, and a fresh breeze into the athletes’ faces over the opening two miles not helping those hoping for good times. However, the terrain and elements meant nothing to Kevin Moore of Dundrum who returned an impressive 21.30 for the distance to maintain his great sequence of successes this year. Kevin won the Michael Cahill Memorial 5k at Coolquill a week previously and is virtually unbeateable at present.

He was chased down by locals Denis Shanahan, who is also in top form and finished a mere 13 seconds adrift, with clubmate and Croke AC chairman, John Fitzgibbon, finishing very strongly for third place in a time of 21.51. Jimmy Boland of Clonmel was fourth across the line in 22.04 with Paddy Cummins of Moycarkey-Coolcroo putting in a determined performance for fifth place in a time of 22.23.

Competition in the categories was no less keen. Dundrum’s John Shanahan took the over 35 category in 23.02 with John Fogarty of Crokes showing good form to be second in 24.05. The over 40 went to Pat Corbett, unattached in 24.50, with Pat Butler of Crokes second in 25.35. Noel Marron of Laois who is dominating the over 45 categories nationally, returned a time of 22.50 with Dermot Hayes of Dundrum second in 23.10.

Dundrum also claimed the over 50 prize in the person of Michael Moore 25.41, while Tommy Moloney of Crokes was top man over 55 in a time of 25.56. Matt Alexander of Coolquill had another success at over 60 level in 26.52, while Eamon Crowley of Clonmel won the over 65 category in 34.26. Michael Dundon claimed the over 70 spot for the locals in 33.47. The junior prize also stayed at home with Sean Phillips having a most impressive run in 27.27, followed home buy Dundrum’s Gerry Hayes in 27.44.

Aine Roche of Clonmel is one of the top ladies on the circuit and she confirmed her status with a fine win in 25.30 getting the better of the ever-improving Linda Grogan, Dundrum, who returned 25.55 with Annmarie Boland of Clonmel third in 26.32. Louisa Condon kept the Croke’s flag flying in fourth place in 27.24 with Dundrum’s Dymphna Ryan fifth in 27.51.

Well done to the Croke’s club officials who once again saw to it that everything went smoothly and that all participants were entertained to refreshments afterwards prior to prize-giving. It was a fitting tribute to the late Dave Fogarty who did so much for athletics in Thurles and further afield.

Next up for Croke Ac is the Thurles Sports Fest 6k on Sunday July 3rd, starting and finishing at the Croke complex at Racecourse Road at 11 am. This is the club’s contribution to the festival of sport in the town and it is hoped all club members, runners and walkers will participate and that there will be support from the neighbouring clubs also.