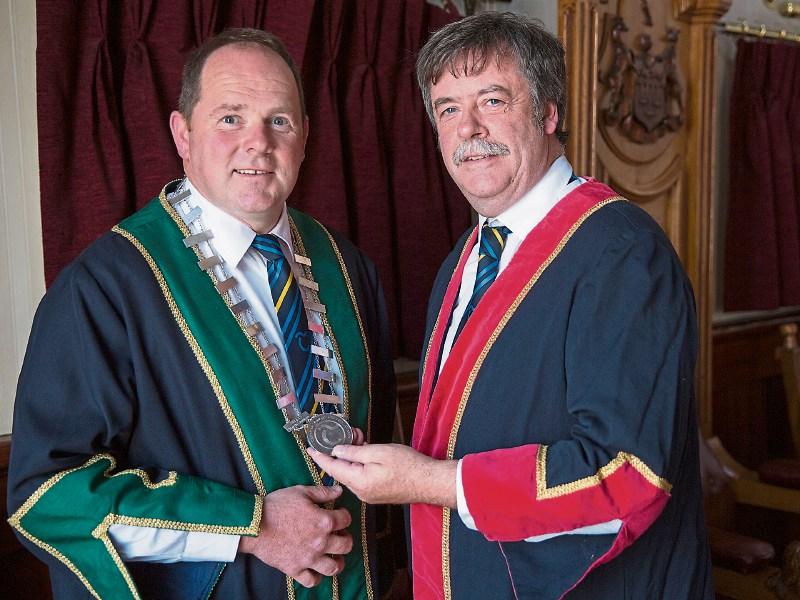 New Mayor of Clonmel Borough Council, Andy Moloney, said that finding replacements for both Suir Pharma and SuperValu would be among his priorities for his year in office.

A pact between Moloney, fellow Independents Martin Lonergan and Richie Molloy, English of the Workers and Unemployed Action Group, and Sinn Fein's Catherine Carey, ensured his election on the nine member council.

He defeated the only other candidate, Fine Gael's Michael Murphy, by five votes to three. Murphy had his own vote, that of Fine Gael colleague, Marie Murphy, and Fianna Fail member and new chair of Tipperary County Council, Siobhan Ambrose. Fianna Fail's Michael Anglin was absent.

Sinn Fein's Catherine Carey was elected Deputy Mayor on a similar vote, with a challenge from Fine Gael's Marie Murphy.

As a former employee of Suir Pharma, Mayor Moloney said he hoped a replacement industry could be found soon for the pharmaceutical firm which closed earlier this year.

"When somelthing is left for too long, it is forgotten about", he said.

And he added that the same thing could happen at the SuperValu site in Market Place unless progress was made to replace it.

"That whole end of town needs to be re-energised, as does the other main town in the district, Cahir, as well as all our villages", he told the meeting.

As a councillor from the Cahir side of the district, he said he wanted to create a better bond beween the two main towns. He remarked that many people from Cahir didn't realise the significance of the council until they had recently attended a civic reception in honour of the All Ireland winning Cahir camogie team.

He said funding would remain a key issue for the council, and Brexit would have an impact on all finances. "We won't know our funding for a while but we will have to play with the cards we are dealt and I look forward to working with new County Council chair Siobhan Ambrose in a unified approach", he stated.

A key area for development over the coming year was tourism and he he hoped to see progress in this area through Tipperary's involvement as part of Ireland's Ancient East. "We have huge potential in this area", he remarked.

Another priority would be the implementation of the urban retail strategies to boost economic activity in the two main towns.

Councillors paid tribute to the new mayor on his election. His proposer, Cllr Carey, said he had worked in Clonmel for 29 years, was involved in numerous groups and organisations and was well up to the challenge.

His seconder, Richie Molloy, described him as a very strong advocate for the community who does a tireless amount of work for groups such as Tidy Towns.

Defeated candidate Michael Murphy wished the new mayor well. While he knew the voting alliance on the other side of the chamber would make it unlikely he would be mayor during this term, it remained an ambition as he hoped to follow in the footsteps of other mayors such as Matt Slater and Sean Lyons.

"But I congratulate Cllr Moloney as he is a very hard-working, fair and impartial public representative", Cllr Murphy said.

Tributes were also paid to outgoing mayor Pat English on his year in office. Councillors said he had represented the council with great distinction and in a very professional manner. They paid tribute to his recognition of so many groups with civic and mayoral receptions and remarked that he had been a great advocate for community and voluntary groups in the area.

Cllr English said he had been proud and honoured to serve as mayor and remarked that a lot had been achieved in the year. A highlight had been the conferring of the Freedom of Clonmel to noted musician and composer, Miceál O Suilleabháin, as well as civic receptions for Clonmel Commercials and Cahir Camogie Club.

He had also been delighted to work with the local commemoration committee on the 1916 Centenary celebrations.

Progress had been made during the year on the development of the former Kickham Barracks site, Suir Island carpark, the new sports hub that would be a boon to local clubs, riverwalks and cycle paths along the Suir, the Marlfield Flood Relief Scheme, and the provision of social housing at Glenconnor.

While he was disappointed to see the closure of Suir Pharma and SuperValu at Market Place during the year, he hoped that replacements could be found.

"However I do feel that the new all-county Tipperary County Council has diluted Clonmel's standing as the county town", he added.

Director of Services Sinead Carr congratulated Cllr English on his year as mayor, remarking that he had put in a huge amount of work and never let anyone down.

"It is important that we work together as a cohesive unit and you have done yourself proud in helping us to meet all our challenges", she said.