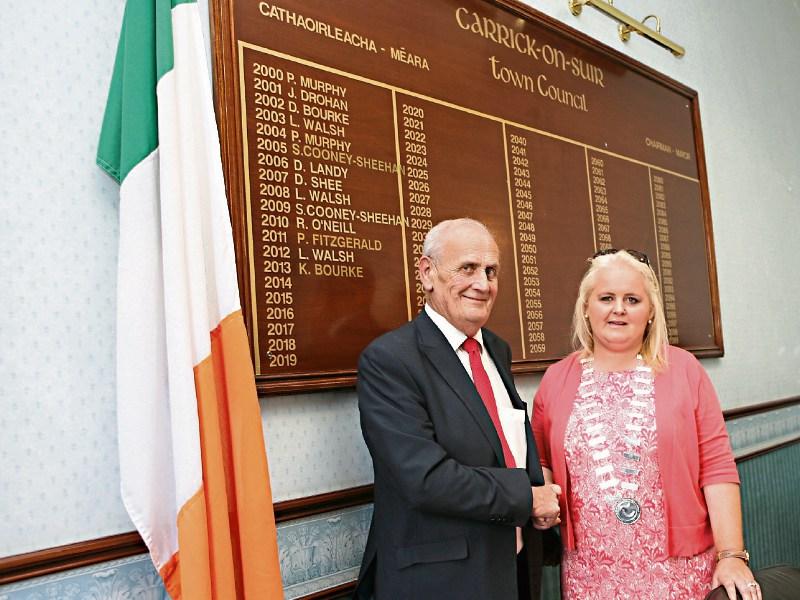 The FF councillor from Ballingarry took over the chains of office from outgoing chairman Independent Cllr Eddie O'Meara at the Council's agm in Carrick-on-Suir Town Hall last Wednesday, June 29.

She was elected unopposed as the Municipal District Council's first woman chairperson thanks to a voting pact comprising herself, Cllr O'Meara and Fine Gael Cllrs John Fahey and Cllr Louise McLoughlin.

It's undestood protracted negotiations took place within the voting pact before Cllr Goldsboro was finally agreed upon as the nominee. At the agm, she was proposed by Cllr John Fahey and Cllr Louise McLoughlin (FG).

Cllr Fahey was elected unopposed as the Council's new vice-chairman at the 15 minute long agm. He was proposed and seconded by Cllr Eddie O'Meara and Cllr Louise McLoughlin.

For the third year, Carrick-on-Suir Cllr David Dunne proposed the Council adopt the d'Hondt system of choosing the Council chairperson but failed to get any seconder.

After the agm, Cllr Goldsboro told The Nationalist she will organise a reception to honour voluntary groups that do huge work in their communities throughout the district ranging from Tidy Towns and burial grounds committees to community centre groups.

She will also be working on setting up an internal Tidy Towns competition and awards for the district that will honour the trojan work these local groups do to beautify their communities.

Cllr Goldsboro said she will also be stepping up her campaign to get flashing speed warning lights installed on the approaches to primary schools at Poulacapple, Cloneen, Drangan, The Commons, Kilcash and Glengoole.

Cllr Goldsboro said parents had approached her about the speed of traffic passing through villages where primary schools are located.

"A large number of grandparents bring and collect children from school and they find it very difficult because of the crazy speed of traffic. The problem is so bad that Tidy Towns judges remarked on it in three villages reports last year. "

She will also be concentrating her energies on promoting the district's tourism by lobbying for the erection of signage and the publication of a brochure highlighting local attractions, particularly sites many people may currently have little awareness of such as the Mining Heritage museum in the Commons and the War House in Ballingarry.

Cllr Goldsboro said she would also be using her term as Council chairperson to press for more funding to upgrade the district's damaged roads.

During the agm, Cllr Dunne repeated criticisms of the voting pact that he voiced at last year's agm. He felt it was unacceptable that he and fellow Carrick-on-Suir Cllr Kieran Bourke were excluded from the pact and would have no opportunity to chair the Council. He believed the town of Carrick-on-Suir deserved to have a local mayor for one of the remaining years of the Council's term.

He said the agm was a "farce" and reiterated that he felt like a "second class" councillor the way it was being conducted.

"I have been contacted by my volunteers who feel like second class voters after voting for me because I will never have the chance to become mayor," he said.

In frustration, he declared what "bugged" him most was the other councillors knew his was right.

Cllr Kieran Bourke said he understood Cllr Dunne's frustration and believed he was 100% right but he was not going to second him. Personally he believed it was a tragedy that a Carrick-on-Suir councillor will not take the chair during this Council's term but that was politics. While he mightn't be happy about it, he accepted it.

Tributes were paid to Cllr Eddie O'Meara, who highlighted in his last speech to the Council as chairman that the abolition of Carrick-on-Suir Town Council was a "huge loss" to the town of Carrick-on-Suir and it had resulted in quadrupling the work of county councillors.