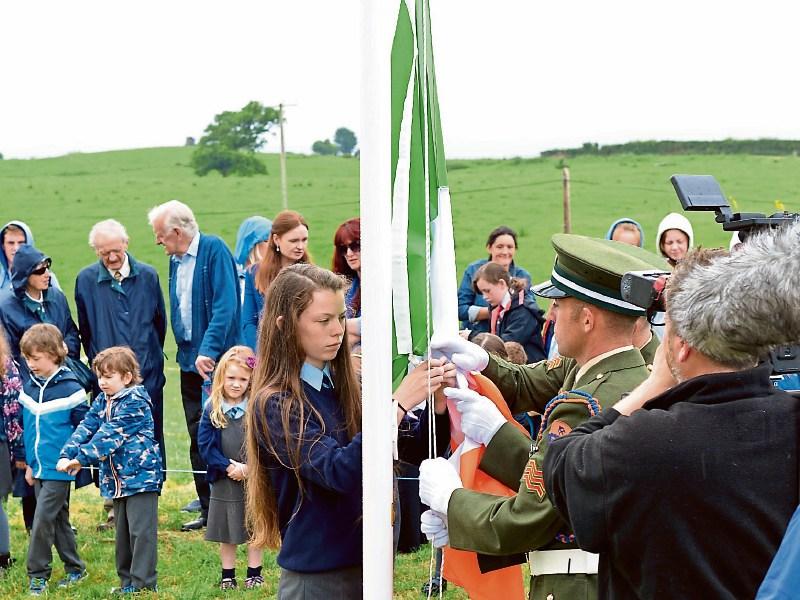 A poignant community event took place in Annacarty village in commemoration of the War of Independence and Civil War.

The event included the Irish Flag raising at the Annacarty RIC Barracks and a wreath laying commemoration by army Officers at the war memorial and the barracks.

The commemoration began with the children walking down from Annacarty National School, each holding a flower that they would later place at the Village War Memorial, where over two hundred people had gathered.

The crowd followed the children in procession to the Annacarty RIC Barracks where two Officers of the Irish Army made a presentation of the National Flag to the people of Annacarty.

The story of how the flag was raised in 1922 and how the children were involved singing the national anthem for the volunteers as they raised the National Flag for the first time was relayed.

Superintendent Pat O’Connor laid a wreath at the door of the barracks in memory of all the people who suffered during the War of Independence and the Civil War; the members of the RIC, their families, the members of the Church Of Ireland and the families of the volunteers.

A special mention was given to Sergeant O’Sullivan, the former Sergeant of Annacarty RIC barracks who disappeared without trace during the War Of Independence and is believed to have been tortured and killed by the Black and Tans.

RTE Presenter John Creedon was also present to address the crowd as RTE were filming for the upcoming TV program, Creedon’s Epic East.

The Commemoration events continued into the afternoon with a display of RIC volunteer memorabilia in the community Hall and a public talk on the Annacarty RIC barracks and the fight for Irish Freedom.

There has been lots of activity at the Annacarty Barracks with an archeological survey taking place by Wolfhound Archeology initiated by local man Tom Touhy and Cllr. Mary Hanna Hourigan.

Joanne Hughes from Wolfhound Archeology explained that the history of the Annacarty Barracks is really exciting as it is one of the earliest barracks in the country dating back to 1821.

“The building is like a time capsule and since it was burnt down in 1922 it hasn’t been touched. From an archeological point of view, it’s like a miniature battlefield and our job is trying to work out archeologically if we can identify what happened in the closing stages in the life of this building.

“We’ve used a few different techniques and our geophysics survey has presented some very interesting facts including the discovery of another road behind the barracks that runs parallel to the main road and the site is a lot more complex than we originally thought.”