Concerns for future of Mount Sion raised with Minister 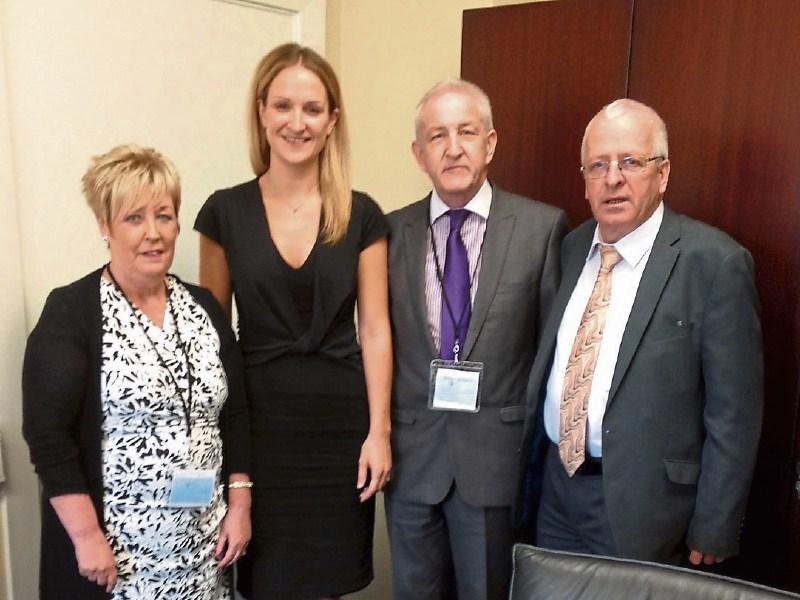 The Friends of Mount Sion in Tipperary Town have brought their concerns regarding the proposed change of alternative service arrangements for the residents in Mount Sion to Ms. Helen McEntee,T.D., Minister of State for Mental Health and Older People.

Martin Quinn, Chairman of the Friends of Mount Sion and Hannah Healy Armshaw, Chair of the Residents Support Group, met the Minister at Leinster House on June 22nd.

Mattie McGrath, T.D., who requested the meeting with the Minister, was in attendance and Jackie Cahill, T.D., met with the Mount Sion representatives prior to the meeting.

Minister McEntee was given a full background on Mount Sion and to the input, both financial and support wise, by the Friends of Mount Sion.

Martin Quinn told Minister McEntee that the insecurity in relation to Mount Sion continues to cause upset and anxiety to the residents and their families and to those who avail of the respite facility.

"The residents in Mount Sion have become a family in their own right and the idea that HSE policy should dictate to break up this 'family' unit is simply not acceptable to the residents families or to the wider Tipperary community" he said.

Hannah Healy Armshaw told Minister McEntee of her concern for her sister Eileen, who is resident in Mount Sion.

She said that family members have all expressed serious concerns regarding the future of their own loved ones and the impact that this is having on them and on their mental health.

Hannah said that as a group they very much endorsed the wonderful service, that has and is, being provided in Mount Sion Community Residence.

"As a group we find it unbelievable that in a time when we hear so much negativity about health service provision that a service which has been so positive in the lives of so many is faced with the prospect of possible closure" said Hannah.

Mr. Quinn said that the residents have over the past 19 years forged very strong links in the community and that for them there is a great sense of 'belonging' to the local community and amongst the businesses in Tipperary Town, where they shop every day.

He also spoke of the efforts of the Friends Support Group in developing and enhancing the facility and the large grounds.

The two Mount Sion representatives said that they were very pleased to have the opportunity to bring their concerns directly to the Minister's table.

They expressed thanks to DeputiesMcGrath and Cahill for their support and to all the other public representatives who been so supportive. They are very hopeful of a positive outcome for Mount Sion and for the residents and their families and they await hearing from the Minister in due course.