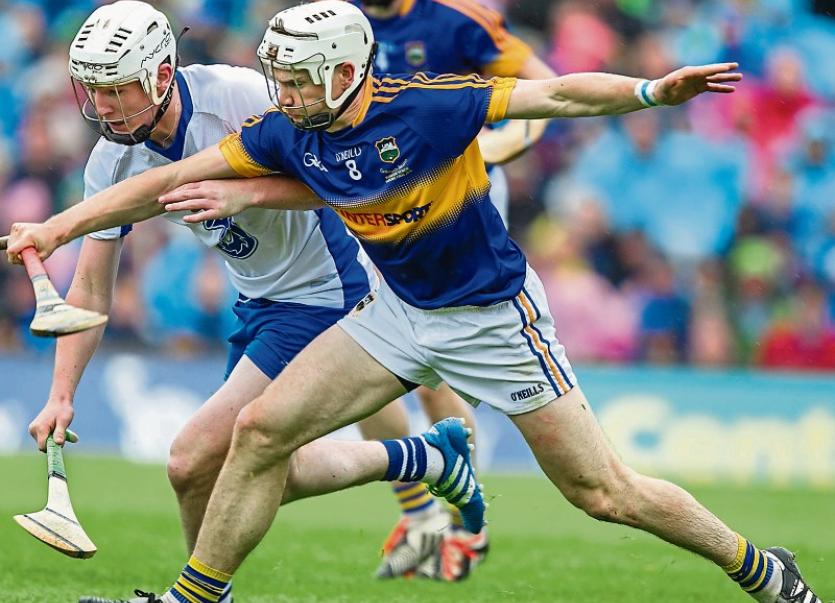 Tipperary hurlers unleashed a tidal wave of desire and intensity to inflict an horrendous hiding on Waterford to secure back to back Munster titles.

Displaying a savage intent to drive home their superiority, Tipperary swept aside Waterford's much heralded sweeper system in ruthless fashion.

They cruised to a twenty one point victory with a dejected and demoralised Waterford enduring a dismal day.

If the victories over Cork and Limerick failed to excite Tipperary supporters, this glorious Munster final triumph at the Gaelic Grounds has injected huge belief and confidence .

A fierce battle was expected in the middle third of the field - Tipperary not only won that but won every battle in every section of the field.

It was a powerful, dynamic team performance which brought about the disintegration of the Waterford sweeper system which they had developed with some success over the last two years.

That system, which had only conceded one goal in 230 minutes in three epic clashes with Clare earlier this year, collapsed completely under the pressure of the Tipperary onslaught.

McGrath, with a masterly exhibition of finishing, landed three goals and two points.

The prolific McGrath and Seamus Callanan, who picked off an impressive 1-11, a scoreline that in itself would have been enough to see off Waterford, both thrived on the space and opportunities created by the graft of Bonner Maher, Noel McGrath, Dan McCormack and Niall O'Meara,

A sublime McGrath pounced after nine minutes to send shock waves through the Waterford defence. His shot was poorly controlled by Stephen O'Keeffe who was distracted by Niall O'Meara running across him which allowed McGrath to pick off his first goal to give Tipperary a 1-2 to 0-4 lead.

McGrath struck again with O'Meara playing an important role again in breaking a puck out for him. McGrath ran onto it and booted to the net after forty one minutes. Two minutes later McGrath turned provider, showing excellent vision to pick out Michael Breen with a hand pass and Breen finished to the net, his fourth goal in three matches.

McGrath completed his hatrick after forty eight minutes, striking home a penalty with great confidence after Seamus Callanan had been taken down by Barry Coughlan who panicked when he found himself one on one with the Tipperary marksman.

It was a breathtaking period of hurling from Tipperary.

Those eight minutes proved this Tipperary team is capable of putting away teams, putting their boot to the floor and showing no mercy.

Waterford's defence crumbled, their challenge fell apart and players like Maurice Shanahan (49) and Austin Gleeson (56) were withdrawn early from the fray on a desperate day for the team.

Callanan, who was kept scoreless from play in last year's Munster showdown with Waterford, fired home Tipp's fifth goal as he capitalised on the huge gaps opening up in the Waterford defence with two minutes left in the game.

It was an impressive performance ,as emphatic a victory Tipperary supporters could hope to see.

Dan McCormack and Niall O'Meara did not score from play and Bonner Maher and Noel McGrath scored a point apiece but that return failed to reflect the enormous contribution all four made on the day with their direct running, closing men down and massive energy levels.

John McGrath and Callanan kept the scoreboard ticking over throughout the rout but the work of that quartet was crucial to Tipperary's success in dismantling the Waterford defence.

So too was the heroic displays of Michael Breen and captain Brenan Maher, who was given a rousing ovation when substituted with eleven minutes left.

The midfield combination completely dominated and ensured Waterford were denied the space to p ick out the isolated Patrick Curran and Maurice Shanahan.

The Tipperary defence was rock solid, did their job magnificently, not only in denying Waterford chances but also setting up attacks with quick direct ball.

Padraic Maher and Cathal Barret , in particular, drove an amount of well directed ball which put Waterford under massive pressure.

The defence afforded ultimate protection to Darren Gleeson who did not have a shot to save on the day and all six defenders kept working to the very end, despite the comfortable lead Tipperary enjoyed.

Tipperary restricted Waterford to just four points from play and as the game progressed Waterford could not even rely on the freetaking skills of Pauric Mahony who missed a few frees in the second half.

Time and time again that incredible workrate saw the Waterford man in possession hounded down, harrassed with Tipperary turning over the ball with relentless consistency.

Even at half time few could have envisaged the procession enjoyed by Tipperary.

Waterford, without playing well in the first half, were still in touch with Tipperary at the break, two points adrift.

They had recovered well from John McGrath's opening goal after nine minutes which saw them go a point behind.

They took the next three scores, two Pauric Mahony frees and one of two wonderful sideline cuts from Austin Gleeson, this one more than 65 yards out.

That thirteenth minute score however was their last score of the half from play and they just managed one more, a Pauric Mahony free with a minute left in the half.

It was an abysmal return for Waterford who shot over ten wides in the first half.

Austin Gleeson, who had hit over incredible points from long range against Clare, was off radar with four shots going wide of the posts in the opening half.

That wide count was testament to the tireless work of the Tipperary defence who forced Waterford to have a go from distance.

Despite that they were still in the game at half time. Patrick Curran, who scored the first point of the game in the first minute, delivered again after just nine seconds of the second half to bring Waterford to within a point of Tipperary.

Tipp responded with three without reply, through Noel McGrath and two from Callanan before Waterford took a score through Pauric Mahony from play after five minutes,

It was to be their last score from play in the game, they only managed three Paul Curran frees after that, as Tipperary set about exerting their grip on the game.

A minute after Mahony pointed for Waterford, John McGrath ran through the Waterford defence for his sec ond goal.