Former hotel the location for the Defence Forces training exercise 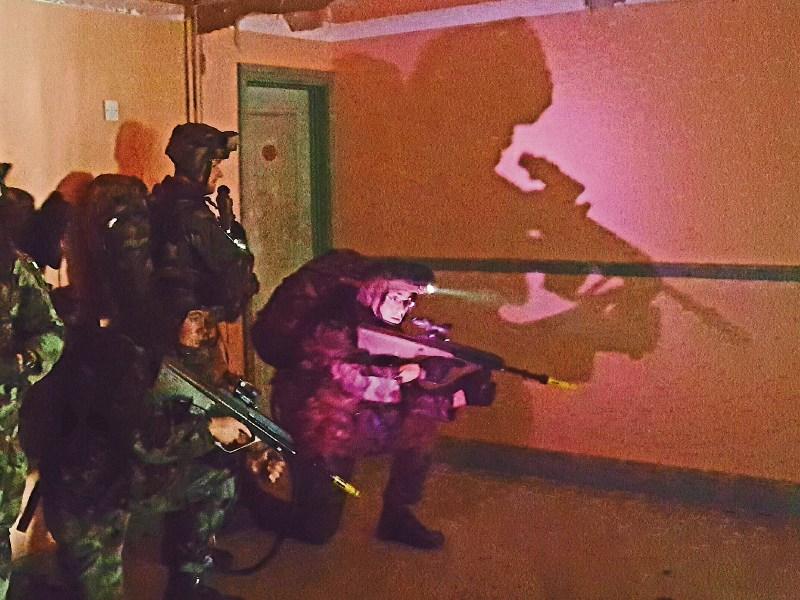 As shots of gunfire rang out inside the derelict shell of the former Munster Hotel on Monday evening, shoppers and pedestrians quietly went about their business out on the streets of Thurles.

Unbeknownst to the rest of the town a large scale military training operation was being carried out inside the building with over 150 army personnel taking part in a simulated attack to secure the hotel from armed elements.

Armed troops dressed in army fatigues and with an average age of 21 took over two floors of the hotel for the exercise which aims to familiarise soldiers with fighting in built up areas.

This was also the first time a central location in a town was used for such training purposes in order for soldiers to gain experience dealing with built up areas.

Up to 150 personnel of A Company from the Third Infantry Battalion took part in the exercise which was led by Comdt Joe Gleeson. This unit, which is based in Kilkenny, is known as ‘The Bloods’ and is the oldest unit in the Irish Defence Forces.

“This is a tough exercise and requires solders to think on their feet. The unfamiliarity of the location adds to the chaos and realism,” explained Commanding Officer Joe Gleeson who added that the second largest county representative in the battallion is from Tipperary.

Among those taking part in the exercise was Tipperary hurler Aidan McCormack who was fresh from his Senior hurling team debut on Sunday evening against Waterford.

“It’s a demanding job and can be tough mentally but once your physically fit you can get on with it,” said the centre forward who has been a member of the Defence Force for almost one year.

“With the way things are changing in the world there is an increased emphasis on this type of fighting. A lot of the fighting that you see on the news takes place in built up towns and villages. This type of training is mainly for overseas situations but we don’t know when the day would come that we have to use it in Ireland,” said Company Sergeant Anthony Jinks. After the exercise was over, the battalion settled down for the night in the derelict hotel.

“This is luxury,” said one soldier. “Usually we’d be camping out over there for training,” he added pointing to a pile of rubble outside.