Hazel is crowned Pride of Tipp 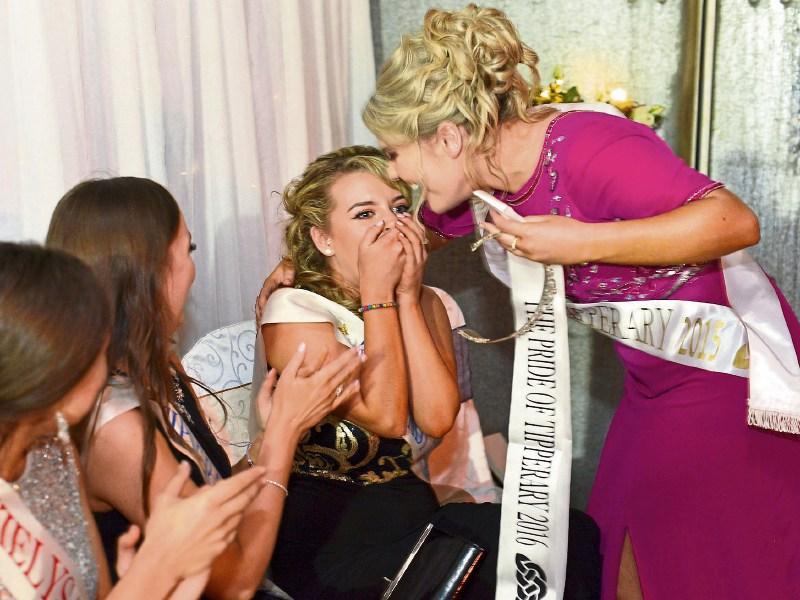 Congratulations to 21-year old Hazel Heffernan from Bansha who is the newly crowned 2016 Pride of Tipperary.

After a very successful two-week festival, the finale of the Pride of Tipperary took place on the main stage after the National Churn Racing championships in Tipperary town.

Hazel says she had no clue that she was even had a chance of winning. “I couldn’t believe it when my name was called out. It took a few moments for it to sink in and it was so surreal.” Hazel’s father Frank and older brother Rob says they are very, very proud of Hazel who was sponsored by Bansha Tidy Towns who were at the finale in full support of their girl.

Hazel was among nine contestants who took part in many events over the two-week Pride of Tipperary Festival including: the popular fashion show, gala dinner, and penalty shoot-out at Cooke Park and quiz night. As the winner of the 2016 Pride of Tipperary Hazel was presented with the Linda O’Brien Memorial Trophy that is awarded each year to the winning contestant. The trophy represents the qualities of dedication to family and friends, sense of fun and the honourable qualities reflected by past contestant Linda O’Brien who passed away suddenly in 2012.

The Pride of Tipperary raises thousands of euro for charity each year during the festival and also the Pride holds fundraising events during her reign. This year’s recipient Circle of Friends is also a favourite of Hazel’s and she intends to keep up the tradition of raising money for charity.

“I think what the Circle of Friends Cancer Support centre does is amazing and I’d also like to raise money for Pieta House as I lost a family member to suicide two years ago. Another charity I’d like to support is Mo Chara Animal Rescue as they do great work for abandoned animals,” added Hazel.

Congratulations to all the contestants who forged friendships and memories that will last a lifetime. The Pride of Tipperary committee wish to thank all their sponsors and supporters for a successful 2016 festival.