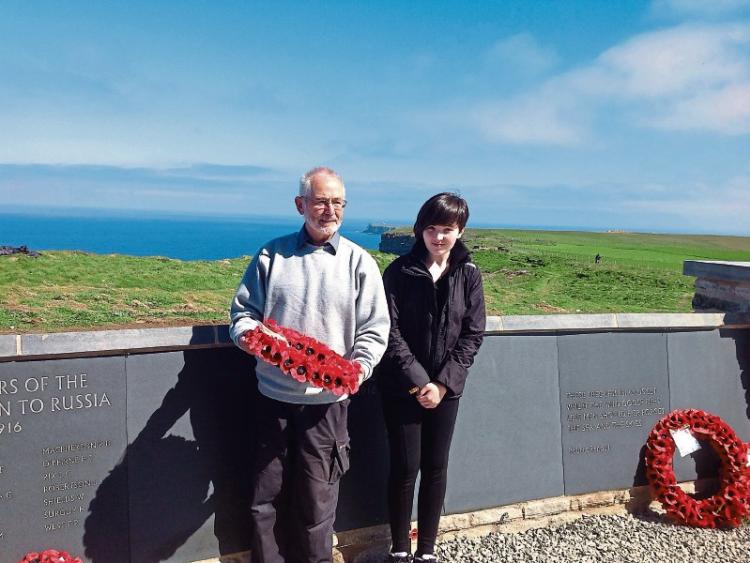 One hundred years after the downing of the HMS Hampshire, a new memorial in honour of the 737 souls who perished, including Kilcommon man Matthew McLoughlin, has been unveiled to commemorate all those who died aboard the ill fated vessel.

On the June 5, 1916, Lord Kitchener, the British Secretary of State for War left Scapa Flow on the Orkney Islands off the coast of Scotland aboard the HMS Hampshire. The vessel was bound for Russia as part of a diplomatic and military mission sent to boost the Allied efforts on the Eastern front. Among Kitchener’s staff who died with him on that day was his Protection Officer Detective Sergeant of the Metropolitan Special Branch Matthew McLoughlin.

Matthew was born on February 5, 1879 in Foilnadrough in the Parish of Kilcommon. He went to London in 1900 and worked with Mr. H.P. Lee a building contractor in Fulham. He later applied for the Metropolitan Police on September 17, 1900 and served there until 1909, when as a Detective Sergeant he transferred to the Special Branch. He progressed through the various classes of that rank to become First Class Sergeant on March 5, 1915.

During his service with Special Branch he soon gained a reputation for being a discreet and extremely capable Officer, with a fluent knowledge of the French language and in the years leading up to the First World War he was involved in many important and sensitive en4quiries. Sgt. McLaughlin also served as Protection Officer to two Kings, Edward V11 and to George V. Prior to his last assignment.

On the June 5, 1916 Kitchener and a party of fourteen including Sgt. McLoughlin and a number of munitions experts boarded the HMS Hampshire bound for Leningrad. At about a quarter to nine in the evening, just off Orkney’s north west coast and within two miles of Marwick Head, HMS Hampshire struck a mine laid by German submarine U-75. Only twelve of Hampshire’s crew survived. Earl Kitchener and his staff including Matthew McLoughlin were lost, along with the 723 crewmembers.

In June this year a commemoration ceremony was held at Marwick Head in the Orkney Islands to commemorate all those who died.

On a brilliant summer's evening, descendants gathered for a ceremony recalling the sombre events of a century before. They stood overlooking the waters where more than 700 men perished. Just offshore, a warship of the modern Royal Navy marked the position where HMS Hampshire, was lost. The wreck site is now a protected war grave. The castellated tower of the Kitchener Memorial has soared above the cliffs of Marwick Head since the mid-1920s.

Now a low wall curves elegantly around the site, bearing the names of each and every one of the 737 men who died in the sinking of the Hampshire, together with nine others from a mine-sweeping vessel. The commemorative wall was unveiled by Queen Elizabeth's representative in Orkney, the Lord Lieutenant, Bill Spence.

Princess Anne had visited Orkney earlier in the afternoon for a private meeting with around 100 descendants. The ceremony was the culmination of a project by the Orkney Heritage Society to restore both the original Kitchener Memorial and to better remember all those who died with Field Marshal Kitchener.

The families of those lost in 1916 were joined by representatives of the British armed forces and local people for the remembrance service, timed to coincide with the exact hour of HMS Hampshire's sinking.

A gun was fired from the Royal Navy destroyer HMS Duncan, anchored at the wreck site, to signal the start of two minutes' silence at 8.45 pm Lady Emma Kitchener, great great niece of Field Marshal Kitchener, attended the service, accompanied by her husband, Lord Fellowes, creator of the British television drama series Downton Abbey. Lady Emma stated "I think the fact that all the men who died on the Hampshire are being commemorated, every single one, is fantastic. It's very, very moving."

Wreaths were laid by Mai Fogarty, Templederry on behalf of the McLoughlin descendants. There was also a wreath on behalf of HRH and one laid by David McLaughlin, Orkney, on behalf of the McLoughlin clan in Scotland. Neil Vyse the Superintendent for the department and head of the Special Branch for whom Matthew worked along with Richard Roe Royalty and Specialist Protection Officer also laid a wreath in Matthew’s memory. It is their intention later in the year to rename their department after Matthew McLoughlin who was the only member of the Special Protection Unit of Scotland Yard who has died on active service.