Clonmel will soon be full of festival cheer 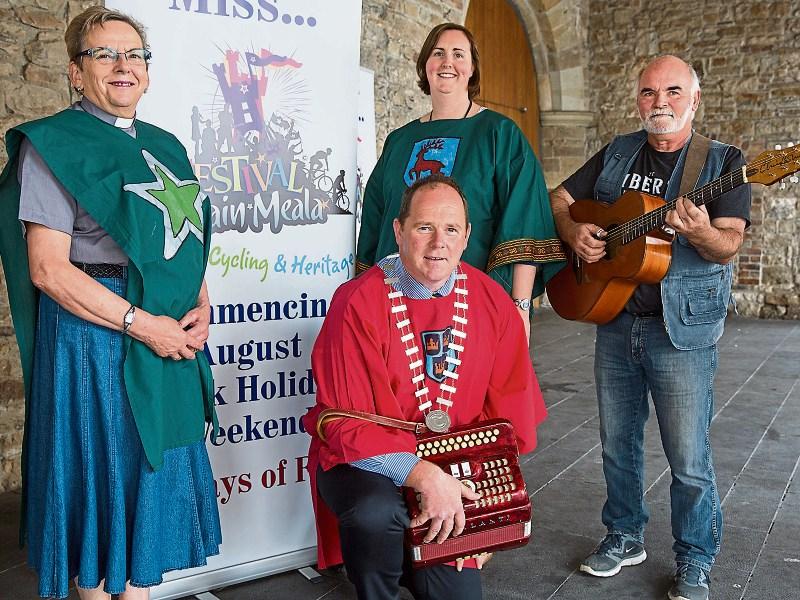 Clonmel will be transformed over nine summer days with an exciting programme of cycling, busking and heritage events during Festival Cluain Meala, which takes place from Saturday July 30-Sunday August 7.

Festival Cluain Meala opens on the August Bank Holiday Weekend with the Suir Valley 3 Day International Cycle Race. This year celebrates the 10th anniversary of the event, with many of the races starting and finishing in Clonmel,

The cycling will also take over the centre of Cahir on Saturday July 30, where the stage will end. Also watch out for the Suir Valley 3 Day International Criterium Stage 3 start at 7pm from O’Connell Street in Clonmel.

The television cameras will be on the streets, as the whole race is being filmed for broadcast on TG4.

The Busking Festival launches at Hotel Minella at 7.30 on Thursday August 4, with the premiere of a short film depicting Cromwell's Siege of Clonmel.

The main cast is made up of service users of Rehab Care.

Eamon Cowan will launch his graphic novel detailing Cromwell's Siege of Clonmel, with music acts performing on the night. All are welcome.

Friday, August 5 kicks off with busking on the streets and under the Main Guard.

Saturday, August 6 features the first ever free Busking Competition held on the streets of Clonmel from 1.30pm until 5pm with a first prize of €500, plus studio recording time.

The day will also feature IW Wrestling at The Friary Car Park in Abbey Street from 2pm until 5pm and the Wobbly Circus on the streets, while John Spillane will host a singer-songwriter workshop on Saturday evening.

Over 80 gigs will be performed in pubs across Clonmel. Admission is free to all gigs, with donations welcome. Join the music trail of rock, indie, country, traditional and much more.

Check out the full listing on www.clonmelbuskingfestival.com and follow the event on the Facebook page Clonmel Busking Festival.

The aim of this festival is to raise awareness for the children who are patients at Our Lady's Children's Hospital in Crumlin and all of the funds are donated to the hospital.

The Medieval Inn trail returns on Friday, August 5 with a costumed tour of the town and plenty of merriment along the way. Register your interest at Tipperary County Museum on 076-1065252. Costumes will be available for hire or you can bring your own,

Admission is €10 and the meeting point is the County Museum, Mick Delahunty Square, Clonmel from 6pm, with the trail starting at 7pm sharp.

On Sunday, August 7 part of the Denis Burke Park will be transformed into a medieval village by Montague demonstrating the craft, cooking and lifestyle of the times, with lots of free medieval fun including a farrier, archery, a combat school, a falconry and coin minting.

There will also be a Big Dig in the Park and Bui Bolg Medieval Street Entertainers, while Banna Chluain Meala will perform.

There will be a competition for Best Dressed Knight and Maiden for adults and children on Family Fun Day.