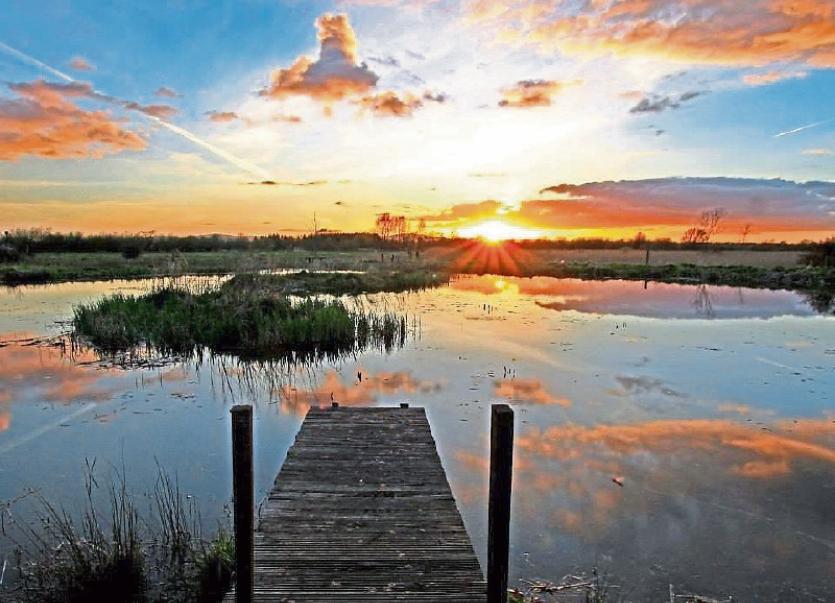 There is always the temptation for a new wet about the ears nature correspondent to pick the lowest hanging fruit and this week, having written about the iconic mute swan last week, we visit the rather limited world of Irish native mammals and discuss what is probably the least visible of them all, the tree cat or Pine Marten.

Despite years of traipsing around Cabragh Wetlands, I only once caught a glimpse of the Cat Crann as it descended a tree in the old fort with the well by the lake, now part of Cabragh Wetlands Trust land. This mustelid, a favourite of Michael Viney of Another Life and our own Aine Lynch, wildlife ranger and present participant in a fascinating lengthy bird ringing project at Cabragh, is a native large Irish carnivore. Predominantly nocturnal, its bib, from almost white to deep rusty orange, is unique to each individual and it moults twice a year. It mates during July and August, uses anal glands to mark its territory and has a unique set of teeth.

The spread of conifer forests has brought a widespread revival of the pine marten, reduced to near extinction in the mid 20th century by the use of strychnine baits at lambing time, meant mainly to poison foxes. It has always been hunted by man for its fur and one account of 18th century Ireland “The Experienced Huntsman”, first published in 1714 states that “the hunter might corner and kill three in a night, whispering to his hounds in the moonlight as the marten’s fur glistened in the light. It once occurred in every county but its main strongholds were the Burren, Gougane Barra, Killarney and the Boyne Valley. It was afforded full protection under the 1976 Wildlife Act when it was almost extinct.

Although far from being yet the farmers’ friend, this beautiful carnivore, who eats fruit like ivy berries, mammals, birds, invertebrates and almost anything it can find in a habitat, is presently enjoying a surge in popularity. This is related to its role in the return of the red squirrel. Although it sometimes eats red squirrels, it does not happen frequently. Dr. Emma Sheehy has linked the spread of pine martens to the decline in grey squirrels and the consequent resurgence of reds. In 2007, the results of the national squirrel survey suggested that the normally invasive grey squirrel, released from baskets after a wedding breakfast in a Co. Longford Big House, may have begun to decline in the midlands of Ireland. This had not happened anywhere else but anecdotally it was attributed by foresters and gamekeepers to an increase in the pine marten population. In an Irish Research Council funded project in 2009 she investigated the role, if any, of the pine marten in red and grey squirrel population dynamics in Ireland. Having examined the distribution in Laois and Offaly and also in Wicklow, she found that the grey squirrel was not at all doing well, with the decline far beyond what would be expected given previous years’ autumn crop and winter temperatures. Another highly unusual result was that red squirrels were doing very well in Laois and Offaly and also in North Tipperary and had begun re-colonizing parts of Longford, Westmeath, north Kilkenny and north Kildare. Using DNA analysis from pine marten hairs and scats and with the help of Waterford IT, it would seem that the presence of an abundant tree climbing predator may be the cause of the grey squirrels’ retraction from the midlands and the native red squirrels’ subsequent recovery. Exactly the same pattern is seen in Scotland. Predator and prey relationships are part of a healthy ecology when both are native but when either are non native and have not evolved a natural relationship with each other, the effects on one or both species is quite dramatic. The research also showed a change in diet where native woodmice and pygmy shrews, standard prey for the pine marten, are being displaced by the bank vole and the greater white toothed shrew, both alien species.

The most recent estimate of pine marten population is 3,000. They are solitary and only occupy their own range. They use scats to mark territory boundary and they don’t tend to fight too much. Their territory is only as big as it needs to be and in Ireland their range is small, typically .4 of a square kilometre. Activity levels peak in the summer months and following mating, they have delayed implantation to avoid carrying during the winter. They are born blind for six weeks in a litter of 1-3 cubs. They are completely dependent on the mother for 8 weeks but are independent after 12 weeks when the males leave. The females don’ breed for two years. They are capable of surviving for 14-16 years but generally about 8 years in the wild.

In Cabragh,we have some stuffed pine martens, the result of road kills, on display. Children and adults are delighted to get up close and personal with this elusive mustalid.

As you read this, the Cabragh Wetlands Summer Camp is forging ahead, the ladies who did such wonderful work for the midsummer meal are taking a well earned rest with our great thanks and Bird Watch Ireland are gearing up for the Bird Watch Fun Day on August 3rd.

Finally,the wetlands are wearing all the cloths of heaven at the moment-yellow, pink and blue and all the colours of the rainbow - why not drop in to find your own personal pot of gold.