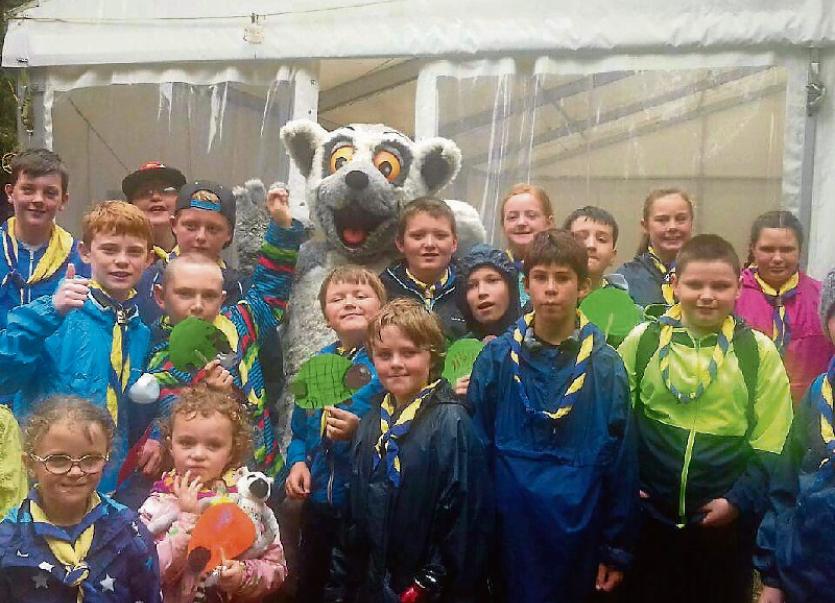 Thurles Cubs have just enjoyed an outstanding summer camp at Fota Island, our last camp of the season.

Our campsite was located right between the wildlife park and the water. Driving in through the woods on Friday morning, we could actually see a tiger through the wire fence. I told one cub we’d feed him to the tiger if he was bold.

“Why don’t we feed you to the tiger?” he protested. “You’ve got nothing left to live for - and you’ve got much more meat!” That certainly put me in my place…

After pitching tents, we went hiking to explore our surrounds. The woods were broadleaf, so the sun streamed in through the green canopy; and we strolled along the trail, identifying trees and plants until we came out at the water’s edge. The tide was out so the cubs busied themselves finding tiny crabs – scores of them! – hiding in the stones along the shore.

Back at camp, big pots of pasta were cooked up for dinner, then the evening’s games began. Some of the cubs played football, while another group discovered the big outdoor chess set - with a flagstone board players could walk on - and held a surprisingly intense chess tournament.

Next morning, we were awoken by frantic hooting sounds from the wildlife park. What creature could that be, we wondered?

After breakfast we filed into the park. We were greeted by a troop of Ring Tailed Lemurs atop the Café roof, and a mob of kangaroos having breakfast - including a Mum with her Joey in pouch! The cubs quickly identified the howler monkeys as the culprits for our early awakening. In the ‘Tropical House’ we found poison-arrow frogs from South America, and watched a butterfly hatch from its chrysalis. Another, alighting on a piece of wood, extended a long pink tongue into a piece of fruit and drank deeply as we watched.

After a lunchbreak back at our campsite we visited the ‘tiger forest’. Several of these spectacular cats strolled by just yards from us, and one clambered onto a fallen tree and stood splendidly surveying its surrounds. Nearby were Asian rhinos: big and primeval-looking with heavily folded skin that looks like armour, these were formidable beasts to behold. Close by, two elegant lionesses rested under a tree; and we watched cheetahs being fed, dashing nimbly back and forth to catch meat from an overhead zip-line. The animals at Fota have space to roam, and there is little sense of confinement. It’s a wonderful place to spend a day.

After a visit to the gift shop, and a cornetto for everybody, we came back to camp. An old oil-drum barbecue was fired up, and soon everybody was tucking into burgers, sausages, salad and bread rolls. A Wicklow Scout group were also using the site, so we invited them to join us at our campfire. As darkness fell the two scout groups sat around a blazing fire, toasting marshmallows, telling jokes and riddles, and singing songs. A classic scout activity, the ‘campfire evening’ never gets old!

At last, we packed our cubs off to their sleeping bags. The tents were alive with chuckles and torchlight, and scout leaders patrolled until the last giggles fell away and peace reigned at last. That part of the evening always takes a while!

Sunday dawned bright and warm. We struck our tents and tidied up – the scout practice of ‘leave no trace’ applies anywhere we go – and climbed on the bus for home.

Back at Thurles we had a ‘passing of the torch’. Christina Kernan is taking over as section leader of Thurles Cubs from Theresa Mason. All voluntary groups depend on capable individuals giving their time and energy to make it all happen. Thurles Cubs owe a big debt of gratitude to Theresa who has led and grown the section for three busy years; and it’s a happy moment for us to see the baton pass from one capable leader to another!