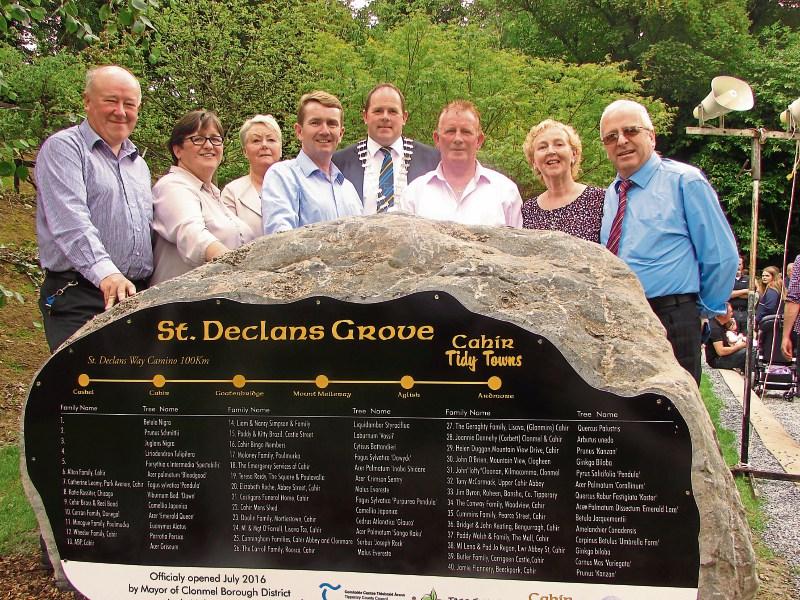 After many months of hard work and planning St Declan's Grove was launched last Sunday.

In his speech the Chairman thanked the Tipperary County Council and in particular former engineer Paul Mulcahy. He gave special acknowledgement to Rory O’Callaghan, John O’Meara, Chris Ryan and outdoor staff of the council who have been supportive of the project.

He said that the Group didn't get to where they are today without the help of the Emergency Services, Cahir Mens Shed, TUS, Philip Quinn, Kenna and Keating's Sand & Gravel. He gave credit to the selection of trees from local ‘Treefields’ Ltd which bring colour and variety to the Grove and make it a new landmark for the town.

Mayor Moloney said that the project would not have been completed without the families who purchased trees that made it all happen.

The Tipperary Brass Band with members of the Cahir Brass Band were commended for playing so elegantly all through the ceremony and it was great to see the Tidy Towns committee finished off the proceedings with a cup of tea and cake for all.

Mayor Moloney thanked the large crowd who attended the official opening, Mattie McGrath TD and fellow councillors Richie Molloy, Marie Murphy and Michael Murphy for attending the launch and said “this has been a great day beside the river and it was here the Group started in 2013 with the Memorial Garden. Everyone can now see what can be achieved with hard work and a super dedicated Tidy Towns group, the result is phenomenal.” Mayor Moloney finished by thanking the press and Tipp FM for keeping people informed of the progress that was being made and said “today is the icing on the cake!”