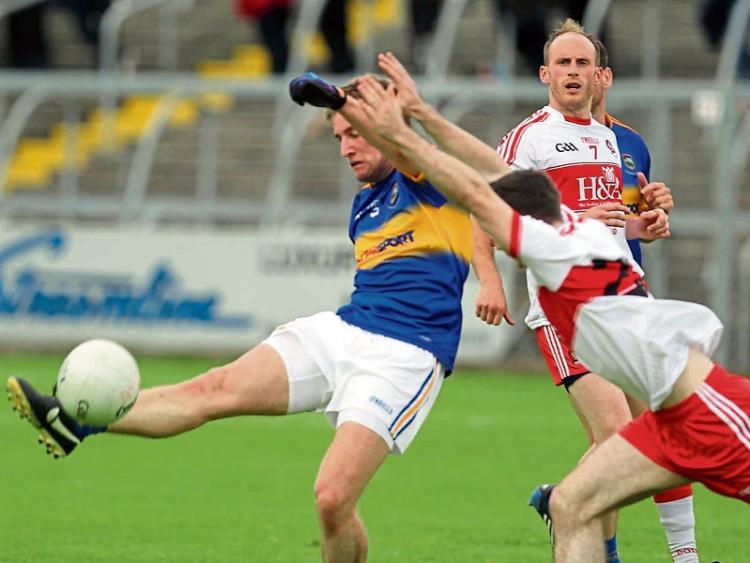 After some near misses in recent years, Tipperary senior footballers have at last got their foot in the door at Croke Park to take their rightful place in an All-Ireland Senior Football Championship quarter-final.

A roller coaster year for Liam Kearns’ team now sees them come face to face with Galway; Tipperary hoping to continue their overall upward progression and book a place in an All-Ireland semi-final for the first time since their 1935 defeat to Cavan by 1-7 to 0-8.

Running parallel with Tipp's team performances all year has been the story of the loss of some high profile players from the panel, most notably Colin O’Riordan, Steven O’Brien and Seamus Kennedy. However, there has been one significant addition to the senior football panel (as if coming in the opposite direction) since the conclusion of the National League, in the person of Kilsheelan/Kilcash’s Bill Maher.

After missing the final cut with Michael Ryan’s hurling panel, Tipperary football manager Liam Kearns immediately snapped up the exciting wing-back and his contribution over four games from Fraher Field to Breffni Park has been a major factor in Tipp’s advancement for the first time ever to this stage of the competition. Maher’s dogged defending plus his trademark straight line advances at pace into attack have been a notable feature of Tipp’s championship games.

Among a very rare breed with All-Ireland minor medals in both codes from 2011 and 2012 (captaining the hurlers to their replay win against Dublin) Bill is one of just a handful of the minor football panel of 2011 to be involved with this year’s senior panel - Evan Comerford, Michael Quinlivan, Ian Fahey and Adrian McGuire the others.

Looking back at Saturday’s win in Cavan, the 22 year-old Construction Management student at University of Limerick, was mixed in his assessment of Tipperary’s performance on the day.

“Going forward I thought we were very good at times and we looked like we could open them up, but our defending was poor and anytime they went forward they looked like scoring. We did show a battling spirit though when we looked like we were in trouble. We battled back well. It was like the same thing against Cork when they brought it back from seven or eight points down to level and they seemed to have all the momentum. In that game (v Cork) Peter (Acheson) stood up to win a ball and we went up to get a score. The same thing happened late in Saturday’s game when Peter won a kick out and we went up and scored and then a second kick out was won and we got a second score. The big players like that stand up when most needed. In those two particular games Peter stood up like the captain he is and turned momentum around and then other lads rowed in,” added Bill.

“Against Derry in the first half a lot of us were very disappointed with how we played. We understood at half-time that how we played in the first half wasn’t going to get us over the line. We did up our performance a couple of per cent in the second half. You could pick out Conor (Sweeney), Michael (Quinlivan), Philip Austin in the forwards, they really stood up and made the difference. But there is plenty of room for improvement for our next game and we will need to be better against Galway.”

Bill pointed out that there is now a growing belief and confidence in this Tipperary side and under no circumstances are they satisfied to let their up-and-down year conclude in Croke Park without their best performance against the Tribesmen.

“If we were given one of the four provincial champions to play, Galway would have been the one we would have picked the one we would have preferred to get. Saying that if they had to pick one of the teams coming through the qualifiers we would probably be the team they would choose. So it works both ways. We will feel confident going in to Sunday’s game. I know the last couple of games against Galway haven’t gone Tipp’s way and we are under no illusions meeting Galway, a team that blew a good Roscommon side away in the Connacht final replay. They will be coming with a lot of momentum behind them. This is definitely going to be a tough one to win but it’s a one-off game which we think we can win,” added Bill, reflecting that now, after a few years of some underage success, Tipperary are developing into a heavyweight senior inter-county side.

One of six minors to pocket both a football and hurling minor medal from 2011 and 2012 (with John McGrath, Steven O’Brien, Dylan Fitzelle, Colin O’Riordan and Tom Kirwan) Bill summed up the championship run thus far...

“We are enjoying the season to date. The main thing is that we are playing big teams now. We are not naive though we know who we are and also who we are up against. We know we’re a year or two off of perhaps contesting an All-Ireland final or semi-final, contesting with the big big teams but we are going in that direction.

“The players that are there now are well capable, it is just about getting the mindset of everyone involved fully in tune that it can be done. Everyone is now hoping that we can get that far. As players we would be fairly confident that we can compete with anyone. We have played a good few big teams now and we know the quality that is out there and we know the quality that we have in our panel and it is only small things in big games that make the difference between winning and losing”, said Bill, who along with his brother Paul was a member of the Tipperary under 21 football team who lost narrowly in last year’s All-Ireland final to Tyrone at Parnell Park.

“We love playing the big teams now, it’s what brings us on. If we didn't play Kerry in the Munster final we wouldn’t have beaten Derry. What you can learn from losing to the top teams is better than beating another team by 10 points .”

Bill also referred to something that was said in Breffni Park before last Saturday’s game that hit home ...

“Shane Stapleton (Tipp selector) made a good point before the match when we were in a huddle. He said you don’t want your championship run to end in Cavan, no matter what happens you want the year to finish in Croke Park. And when we thought about it afterwards it is very true.

“If your season doesn’t end in Croke Park it is a disappointment no matter who you are or what team you play for. As a footballer you want to get to Croke Park, you want to perform in Croke Park. We are there now in a quarter-final with three games now maximum left for anyone. And whatever happens we are now going to finish in Croke Park and it’s going to be a relatively successful year now no matter what.

“It puts it in to everyone’s head now that we are not a hundred million miles away now. We can get there, to a semi-final or final.”

“We won’t be fazed in anyway by Croke Park on Sunday. A lot of our players, the majority of the players on the panel will have played there already plus the fact that it is a quarter-final and not a semi-final it won’t be a sell-out crowd and won’t be as daunting as playing to a full house at Croke Park. I don’t think it is even as big an occasion as a Munster final so I don’t think the occasion will affect too many players on the day, he added.

Finally looking ahead to Sunday and the challenge Galway will present, Bill, said “I think they are on a par with Derry and Cork, I don’t think they are as good as Kerry at the minute. They are a good young and coming team as well, a couple of them have All-Ireland under 21 medals. I don’t think we are 10 points worse than Kerry. If we can perform like we did against Cork, and in the second half against Derry, and if we can defend like we did against Cork we have a big chance, hopefully. It will go down to the wire like it did against Derry on Saturday and there will only be a point or two in it in the end we feel,” concluded Bill.