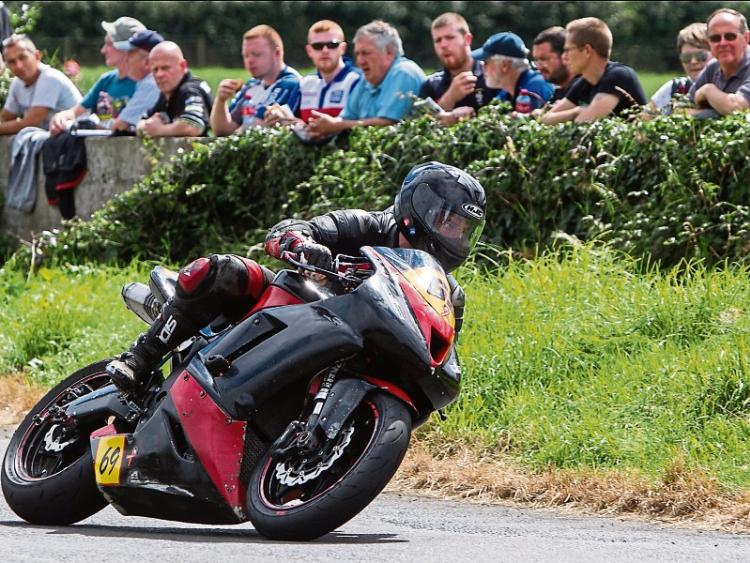 Sunshine, a wedding, lap records, a new course record, were the high points of the Handy Man/Kilmeadan Tyres Faugheen 50 at the weekend,

But the low points saw two serious crashes, one on Saturday and the other on Sunday.

It was a weekend of mixed emotions that started off with free practice, and an unusual stoppage, to allow a wedding to take place in the church in Faugheen village.

It was also a weekend that saw our brilliant medical teams stretched to the limit, but yet they coped with impeccable co-ordination and expertise, as did the organising Faugheen Club.

The first of the two incidents saw the 2015 Irish Junior Support Road Race Champion Brian Coomey crash heavily at the start of the 600 practice.

The second serious incident took place on Sunday at the start of the Superbike race, when Seamus Elliott also crashed heavily.

Both riders suffered serious injuries, and were treated on the scene by the MCI Medical team, and transferred to hospital by the Irish Coast Guard Helicopter to CUH, with members of the medical team travelling to hospital with the riders.

Both riders are in intensive care, and are in a stable condition.

The racing saw a battle of the Dereks, with Derek McGee continuing his great 600 form, and despite blowing up his race engine in practice, his team worked through the night to replace the engine, and he repaid their hard work with a 4 second win over Derek Sheils and Micko Sweeney.

Sheils took the Open Championship Superbike race after a thrilling dice with McGee, and he had just 0.449 of a second to spare over the “Mullingar Missile” McGee at the flag.

Micko Sweeney was unfortunate to crash out while leading the 650 Supertwin race at Walderstown, but he made up for this in a classic encounter with Derek Sheils and Paul Jordan.

Sheils took the lead and was still in front after three laps, but the Skerries rider took an amazing three seconds out of Sheils on the next lap setting the fastest lap of the race at 97.133, just outside the current lap record, and Sheils had no match for the Skerries rider finishing 1.214 seconds ahead of Sheils, with Paul Jordan just behind in third.

The Grand Final was road racing at its best, with Sheils and McGee once more to the fore.

McGee led from the start, and despite breaking the course record in two successive laps, Sheils had to settle for second place behind McGee who gave the NW Racing team their first success of the year on the BMW.