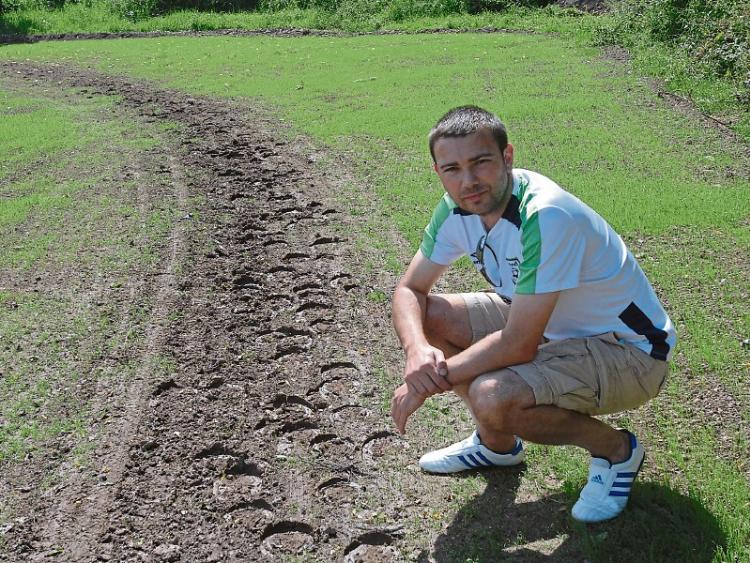 A supposedly happy homecoming for a Clonmel soccer club, back to its original playing grounds after an absence of over a decade, is being marred by some serious anti-social behaviour.

Old Bridge Football Club’s home grounds at Green Lane, now freshly developed and landscaped at great expense, has been the subject of unwelcome intruders over the past week however. The damage around the entire perimeter of the recently-seeded surface has been carried out, on at least three occasions, by a horse-drawn vehicle and the football club and the Old Bridge community at large are now calling on those responsible for this behaviour to stop before further costly damage is caused.

Many Old Bridge residents, and Clonmel people in general, will have very fond memories of the picturesque soccer field at Green Lane nestled besides the river Suir under the foothills of the Comeraghs. For many years, besides competing competitively, the Old Bridge Soccer Club ran a very successful summer time Pub League, where good and not-so-good players, got their chance to live out their football dreams.

Club captain and committee member Stephen Kearns, a team member with ‘The Bridge’ for the past 12 years, expressed great disappointment with recent developments.

“We very much wanted this to be a good news story about the Old Bridge Soccer Club returning home to Green Lane. We have been gone from here since the flood relief work commenced about 10 years ago and we want to get back to our spiritual home, to be among the local community where we belong,” he added.

“We have literally ploughed everything we have into the development of this fine soccer facility and many people have put tremendous work into it, particularly Tipperary County Council with whom our committee member, Noel Walsh has been liaising over the last couple of years to get the project to this stage.

“The club has also been fundraising very actively over the past two years or so trying to make up the deficit to get the work underway. Great credit to everyone who has helped out with flag days, churchgate collections, our Darts Night at Christmas, the table quiz in the Emigrants Rest and our “Last Man Standing” competition.

“The Old Bridge Community Group with Seamus Healy as treasurer have also given us great help and support, as have Pat English and Ken Horne.

“But what has happened over the past week has put a damper on things from our perspective and it is very frustrating when you consider all that has gone into getting the project to where it is now.

“The Council have laid extensive drainage under the field to alleviate surface water problems and the contractor has done an excellent job in laying the pitch using an expensive and special hard-wearing sports grass seed. And just as the first shoots of green grass began to appear so too did the horses. We first noticed the problem on Monday last after the fence had been interfered with to gain access. After putting the fence back in place it was taken down again on Tuesday and repeated on Wednesday, and each time the hoof marks got deeper. It is frustrating to say the least” added the club captain.

“The Council have now erected a barrier to prevent further access and hopefully that will be the end of it. The Gardai have been notified of the problem also and they are monitoring the area. Hopefully there won’t be any further damage caused to our field,” added Stephen.

Stephen went on to outline the plans of the now ambitious club.

“What we have achieved now, getting back home to Green Lane, is just Phase 1 of our plans. Phase 2 involves securing the field by erecting steel fencing around the site. We will need it going forward. That is our top priority now, especially after recent events, and we will keep fundraising to help pay for that. We would appeal to any businesses or volunteers to help us in any way they wish. We will also re-run all our fundraisers from last year.

“On Friday night, 2nd September, we are holding a 5K Fun Walk around the Old Bridge/Green Lane loop to show the public our new field. Having the soccer club back at Green Lane is a boost for the Old Bridge and the community.

“Phase 3 is about getting our dressing rooms (temporary at the start), goals, dug-outs, etc., in place so that we can have the pitch made playable again. Once all that is in place, hopefully for the beginning of the 2017 soccer season, the TSDL have promised to help us out as much as they can and we look forward to working with them and are very grateful for any help they can give us,” added club veteran Stephen.

For now Old Bridge Football Club, under manager Emmet Ryan, are back doing what they want to do, playing football and preparing for the new season. The proud club, established in 1975, will take their place once again this year in the Premier Division of the Tipperary Southern and District League, alongside fellow Clonmel teams, Town and Celtic.

“We did very well to survive in the top flight last season particularly when you consider we had to play ALL our games away from home. Because we operate in the top flight, each club is obliged to provide its own dressing rooms and shower facilities on site. We couldn’t provide that at Ferryhouse to TS&DL standards, so we had to travel to all our games last year, twice to Cooke Park, twice to the Dr. Pat O’Callaghan Complex, twice to the By-Pass, and we did. But we can now finally start looking forward to having our own set up and facilities for many years to come,” concluded Stephen.