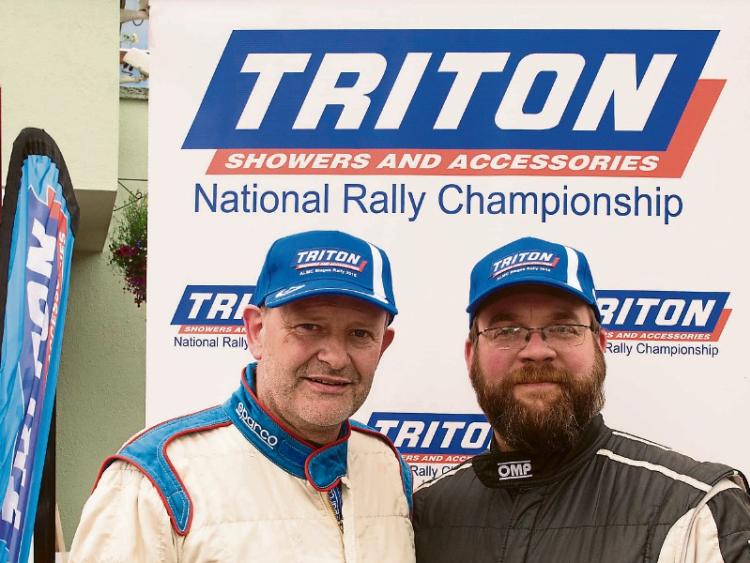 Triton Showers National Rally Championship leader Clonmel’s Roy White (Ford Fiesta WRC) is on home ground for Sunday’s sixth round of the campaign, the Sepam Tipperary Stonethrowers Rally that is based in Clonmel.

White (pictured right with beard) and his Cork co-driver James O’Brien have the first of three opportunities to win the prestigious Vard Memorial Trophy and although there are a number of permutations, they will win the title with 22 championship points from the nine-stage event.

White has led the eight round series since the second round, the Circuit of Kerry and he is aiming to become the third Tipperary driver to be crowned national rally champion since the series began in 1978.

Previously, Cahir’s Donie Keating won the title in 1981 and 1991 while the late Frank Meagher from Cloneen, was the national champion in 1986

Speaking ahead of the event White said - “I would like to say that I am looking at this rally as just another event, but I can’t say that. It is on my mind that we can win the championship and it would be great to wrap it up in Clonmel but it’s going to be difficult. We still have a lot of points to get and it’s a very strong entry.”

He added, “Frank (Meagher) was always my boyhood rallying hero, he was only up the road from me in Cloneen and he was always someone that I really admired.”

The Clonmel driver, who has taken maximum points in Cavan and Carlow, is aware that he hasn’t taken outright victory on any round to date. “For sure, that is something that has been on my mind. Yes, we have been close but not close enough. I am not going with the view that we have to win at all costs, I am happy with my pace, we are making changes with the car all the time, we analyse what happens after and see where we can improve both the car and myself. I will go as hard as I can, I need a good result to get the points.”

For his co-driver James O’Brien, success in the Triton series will complete a unique and hitherto unprecedented record. He has already won the National Navigation series, the National Forest Championship and the Tarmac Championship.

Commenting, Roy White said, “His experience and himself are a key part of our good run of results and fortune.”

Last year’s winner Monaghan’s Sam Moffett (Ford Fiesta R5) is the top seed. On that occasion he beat his brother Josh by 15 seconds. A winner of the Cavan Rally in May, Sam is certain to set a good pace and will be followed off the start line by Roy White.

Former double national champion Declan Boyle (Ford Fiesta WRC), who won the last round, the ALMC Rally in Trim, has good memories of Clonmel, he won his inaugural national title there in 2013. Another former champion Niall Maguire (Subaru WRC S12B) knows that nothing short of maximum points is almost a pre-requisite for his title bid.

The strong entry also features yet another former champion Peadar Hurson (Subaru WRC S12B), he still has a chance on the title but it is really an uphill battle given White’s consistent performances.

Tyrone’s Alastair Fisher and Monaghan’s Josh Moffett in Fiesta R5’s and Antrim’s Desi Henry (Skoda Fabia R5) are all utilising the rally as a shakedown for the forthcoming Ulster Rally. They should set a good pace to match the Triton regulars. The impressive top ten is completed by Maynooth’s Kevin Barrett and Clonakilty’s