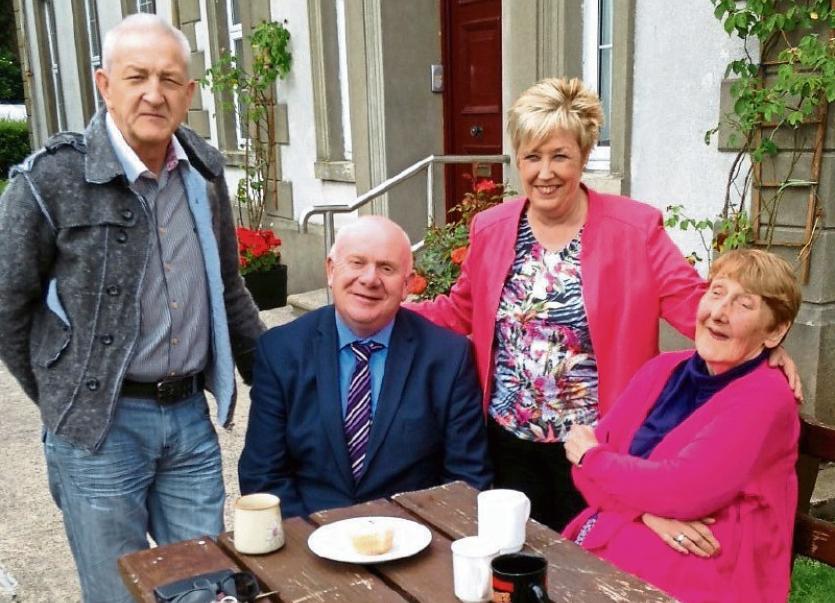 Jackie is a neighbour and friend of the Healy family. Jackie enjoyed a cup of tea with Eileen and Eileen's sister Hannah Healy Armshaw and Friend's Chairman Martin Quinn.

Eileen told Jackie of her concerns that Mount Sion may be closing and asked Jackie to help ensure that she could stay in Mount Sion.

Jackie said that he was worried about the attitude of the HSE to Mount Sion and said that he would be asking the Minister to look at making a capital investment in Mount Sion to ensure that it meets all standards.

Jackie said that Mount Sion had been starved of resources and that the investment required was not very substantial. He said that he was very impressed with Mount Sion and that it was a beautiful tranquil setting and that he could see how happy and contented the residents were there.

He said that under no circumstances should the residents be moved from their home in Mount Sion and that he would fight to retain the services there.

During his visit with Eileen he also had the opportunity to speak with Martin Quinn about the terrific work of the Friends Support Group and with Eileen's sister Hannah Healy Armshaw about the great concerns that she and other family members have about Mount Sion.

Jackie also had the opportunity to speak with some of the other residents and he provided re-assurance to them that he would do everything that he could to ensure that Mount Sion would remain open and that the residents would remain in their home in Mount Sion.