Nenagh opens its doors to U14 Gaza soccer team 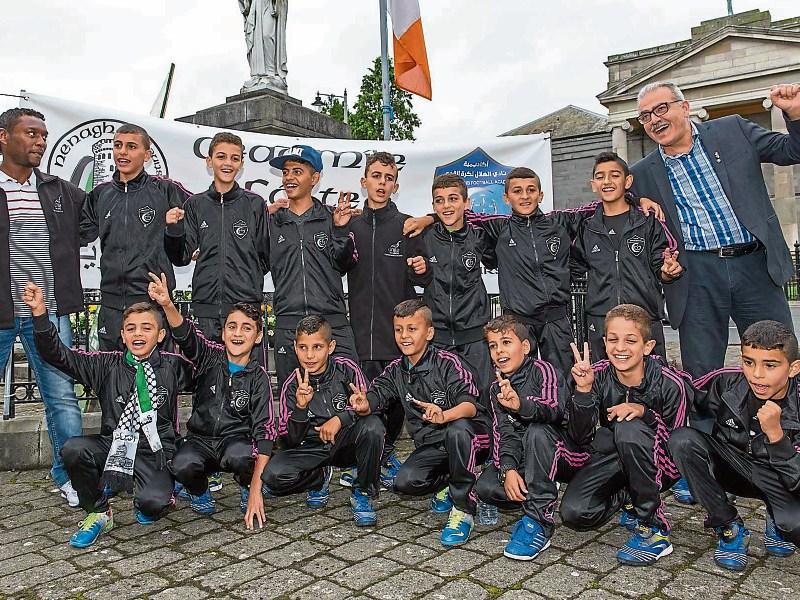 An underage soccer team from Gaza who are staying and playing in Nenagh during their visit to Ireland will this Friday take in a boat trip and horseriding.

The 14 children from the Al Helal Football Academy will enjoy their boat trip on Lough Derg when the embark at Killaoe and will also try their hand and equestrian sports at Rory McDonnell's equestrian centre. They will also visit Galway where they will take in the Galway Utd and Dundalk match. This should be a highlight following Dundalk's Champions League qualifiying win.

Thegroup arrived on bank holiday Monday and a large crowd of friends and supporters turned out between showers in Nenagh’s Banba Square to give the long awaited visitors a warm Tipperary welcome.

The footballers, aged from 10 to 14 years old, are staying and playing in Nenagh, as well as in Maynooth, Dublin, Limerick, Kinvara and Wexford.

Team manager manager Ayed Aburamadan said: “These are talented players from a number of areas around Gaza. The academy seeks to develop their talents as well as other skills.”

Ayed, a civil engineer by training, who has spent time with the World Bank, now works with the Palestine Islamic Bank.

Ayed made special mention of the boy Karam Zaidan who was not given a permit to travel. Karam was injured in the 2014 Israeli bombardment during which over 500 children were killed.

Since their arrival, the local organisers, Nenagh Friends of Palestine, and supporters, have put together a busy schedule for the team.

On Tuesday, a civic reception was held in the Hibernian Inn, with the Palestinian Ambassador, Ahmad Abdelrazek, attendding along with local councillors and Cllr Phyll Bugler, Cathaoirleach of the Nenagh Municipal District Council.

On Wednesday, they were hosted by Cloughjordan Community Circus and the community there, with a special introduction to hurling put on Burgess GAA that evening.

This Thursday the group was due to tour West Clare and Kinvara.

On Saturday, Nenagh AFC and Nenagh Celtic will host the Gaza team for the afternoon and have a blitz tournament with the two local teams, starting at 12pm in Brickfields. All are welcome to come along meet the team and enjoy the soccer matches.

The group leaves for Limerick on Saturday evening, flying back to Gaza on Monday morning.

Nenagh Friends of Palestine thanked everyone who had contributed to making this initiative possible through support and sponsorship, as well as the national organisers Gaza Action Ireland,

The visit had not been helped by the group not being granted permits in time, which meant that an earlier itinerary had to be scrapped, a great inconvenience to all local groups.

According to local group member Sara McDonnell: “It is such a great and unique opportunity for these kids to get out of the conflict zone they live in and visit us here in Ireland.”