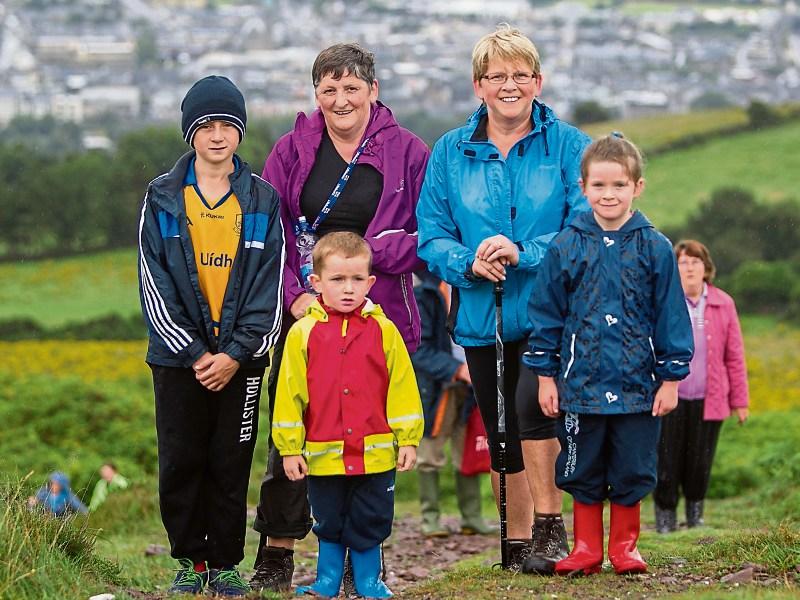 The congregation at the annual Mass at The Holy Year Cross on Monday morning included two very special pilgrims.

Pauline Flynn and Mary Clancy were among the procession, estimated to be in the region of 3,000 people, on August 20 1950 when The Cross was carried from Ss Peter and Paul's Church in Clonmel to Cnoc a Chomortais, or Scrouthea Hill, and erected at a height of just over 1,000 feet above sea level on the foothills of The Comeragh mountains overlooking Clonmel.

Sixty six years later both women were back at The Cross on Monday morning for the annual Mass, which is celebrated each year on the August Bank Holiday.

The Mass went ahead despite heavy rain, grey skies and testing underfoot conditions on the final approach, although as expected the poor weather meant that the numbers attending were down on other years.

It was celebrated by Canon Brendan Crowley, Parish Priest of Ss Peter and Paul's, who said it was a privilege and honour to offer the Mass for all present.

"This annual event is a wonderful day and 66 years ago The Cross was brought in procession by your ancestors from Ss Peter and Paul's church up the hill", said Canon Crowley, who remembered and thanked all those who had carried The Cross up the mountain.

"It's great to see so many young people present and they will continue this tradition when we're gone, whether it's raining or fine", he said.

Among the many things that he said people should be grateful for, Canon Crowley paid tribute to the Tipperary footballers, who he said we had seen "lighting up" Croke Park the previous day when they beat Galway in the All-Ireland Senior Championship quarter-final.

"Half the parish is in county Waterford and they will be in Croke Park next Sunday for the All-Ireland Hurling semi-final against Kilkenny".

Canon Crowley said we had a lovely country and he prayed that it wouldn't be hit by terrorism.

He also praised the organising committee, based at the Old Bridge, who look after and maintain The Cross. A former member of the committee, Paddy Halley, who died recently was remembered in the prayers and his photo displayed on the altar.

The readings were recited by District Mayor Andy Moloney and Deputy Seamus Healy.

The procession that brought The Cross to the hilltop in August 1950 was led by The Boys Club Band and followed by a representative gathering including members of Clonmel Corporation, local choral societies, church choirs, Order of St. John, Order of Malta, the army, sporting bodies, the business community and the people of the town.

The Cross was blessed by Very Rev. Dean Byrne, Parish Priest of Ss Peter and Paul’s and carried by relays of volunteers.

Dean Byrne read a letter from The Vatican bestowing a blessing on the proceedings.