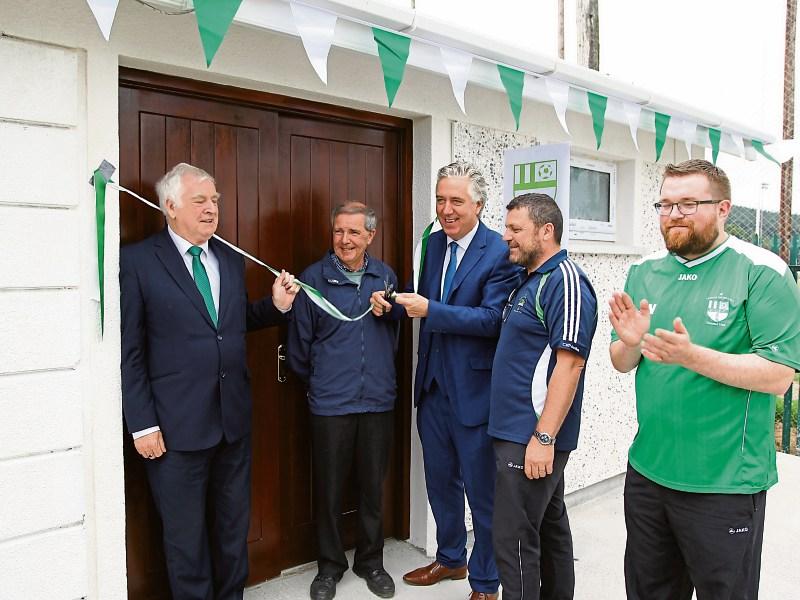 Generations of Club members and supporters ranging from founding members to the current schoolboys players gathered at Tom Drohan Park for the event that was also attended by former Irish international players Ray Houghton and Keith Andrews, and Irish women's internationals Ciara Rossiter and Rianna Jarrett.

The ceremony on Tuesday, July 26 was one of the celebrations organised as part of the FAI's Festival of Football in Tipperary last week.

The FAI delegation first received a brief overview of the Club's history from Club Chairman Liam Wells as they viewed a photographic display in the clubhouse.

There was applause when Mr Delaney announced the grant of €5000 to assist with the acquisition of land adjoining the Club to develop an additional playing pitch.

Carrick Utd., which boasts more than 600 members, is in negotiations with Carrick-on-Suir Municipal District Council to purchase the Council owned land.

Carrick Utd. PRO Philip Cullinane said this generous donation from the FAI will be invaluable in the Club's efforts to cater for existing playing numbers, for which we are very grateful.

FAI President Tony Fitzgerald and John Delaney then formally opened the clubhouse extension, which includes new public toilest and an extra dressing room. The extension cost approximately €50,000 and was completed just in time for the official opening. The Club received a €30,000 National Lottery sports capital grant towards the project.

The FAI President honoured the Club's Development Secretary Richard Friend for his services to football and Carrick Utd., which was greeted with great acclaim.

Ray Houghton, Keith Andrews, Ciara Rossiter and Rianna Jarrett presented the annual schoolboys and girls Player of the Year awards, much to the excitement of all involved.

The Academy players then showcased their skills to the FAI delegation, who mingled with the crowdand posed for photographs players and their families.

Mr Cullinane said the event was an occasion of togetherness and celebration made possible by the combined efforts of everyone working together for the town.

It was also an acknowledgment of the generoisty of the people of Carrick on Suir and surrounding areas combined with the relentless drive, enthusiasm and ambition of numerous hardworking committees in making possible the state- of-the- art facility that is Tom Drohan Park.

The Club thanks all who helped make the event memorable and fun filled. Thanks to all the committees and volunteers, who worked tirelessly to ensure the grounds looked pristine and that the occasion went smoothly.

The Club also appreciates the good wishes extended by the people of Carrick and beyond along with those of the Club's governing body.