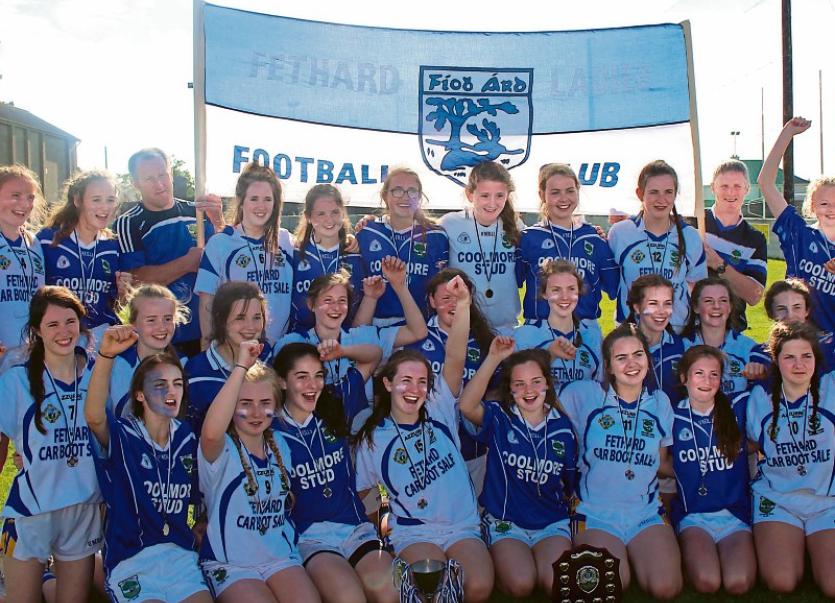 Bernadette had been secretary of the Fethard Ladies Football Club and despite a long battle with cancer continued in her position to the end so it seemed a fitting tribute to her involvement and dedication to the club.

From the early stages of planning it was clear that every club member, committee member and supporter were behind the idea and it was no surprise that there were so many girls interested in playing that Fethard had to enter two teams in the blitz.

Fethard’s ‘White’ and ‘Blue’ teams were accompanied in competition by Abbeyside, Fermoy, Moyle Rovers, Moycarkey, St.Pat’s/Commercials combination team and Templemore. From early morning it was clear that there was a certain buzz at the Barrack and School Fields as the sun came out and enough buns and sandwiches arrived to feed an army.

The blitz kicked off with the first game between Fethard White and St. Pat’s/Commercials combination team. It was fitting that the first goal of the tournament was scored in this game by Laura Stocksborough. Fethard had a good win and followed this with successive wins over Abbeyside and Moycarkey to top the group. St Pat’s/Commercials, Abbeyside and Moycarkey all finished level on points after their games which resulted in a 21 metre shoot out – St.Pat’s/Commericals won this and claimed second place in the Group to contest the Cup Semi-Final.

In Group B, a thrilling opening game resulted in a win for Moyle Rovers over Fermoy who went on to top the group undefeated. Fethard Blue opened with a draw against Templemore followed by a narrow loss to Moyle Rovers conceding a last minute goal. Fermoy defeated Fethard Blue in the final game of the group to go forward to the Cup Semi-Final.

In the Shield semi-final, Fethard Blue had a great win over Abbeyside while in the other semi-final Moycarkey defeated Templemore. In the final, following a very close encounter, Fethard Blue recorded a thrilling victory for this young team to huge roars from the supporters.

In the Cup semi-final, Fethard White defeated Fermoy 3-8 to 1-2 while Moyle Rovers came from behind to defeat St. Pat’s/Commercials setting up a repeat of last year’s County U16 Final between Moyle Rovers and Fethard. Fethard had a great win in a tough game on a scoreline of 1-6 to 0-4. It was a fitting end when the final goal of the day was also scored by Laura Stocksborough. Fethard recorded their fifth win to become deserving winners of a very memorable tournament.

The Stocksborough and Flanagan families along with the Fethard Ladies Football Club would like to extend their warm appreciation to all teams who participated on the day, to those who provided refreshments, refereed or helped in any way to make the day such a success. After the games a BBQ was enjoyed by all in Lonergans, thanks to Paul and Angela for the delicious food which finished off a great day for all involved.