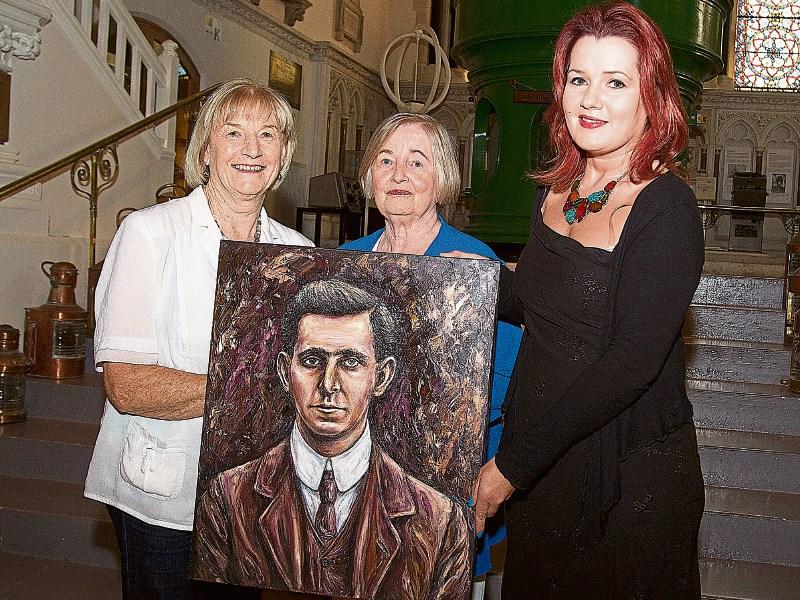 The Post Polio Support Group (PPSG) has been presented with a painting of the distinguished Irish Patriot and Revolutionary, Sean Mac Diarmada, Proclamation Signatory, member of the Provisional Government and Polio Survivor.

Sean MacDiarmada was one of the leaders of the Irish Volunteers who instigated the 1916 Rising; he was one of the seven signatories of the Proclamation which was read out by P.H. Pearse outside the GPO in 1916.

In July 1911, after organising opposition to the visit of King George V in Dublin, Sean contracted Polio – a rampant and feared disease at the time. He spent four months in the Mater Hospital. The illness had a devastating effect on him and aged him considerably so much so that friends did not identify him in the street. Polio affected his right leg and he hobbled about on a cane or sometimes used a Hurley stick for support.

Overnight, Mac Diarmada went from a vigorous man of 29 years to one who, according to Madge Daly a cousin of Tom Clarke’s wife Kathleen, looked like a “delicate, bearded, middle aged man” walking on a crutch. He spent the rest of his life with a walking stick.

On the morning of the rising, Easter Monday 1916, Sean, because of his infirmity took a taxi from Liberty Hall to the GPO and thus started his Revolution. He was possibly the only world revolutionary to go to war in a taxi!

Sean wore no uniform nor fired a shot but he was present in the GPO as a member of the Provisional Government. Thursday May 12th 2016 was the centenary of the execution of Sean Mac Diarmada and it was a singular honour for the Post Polio Support Group to be invited to, and be recognised, by the Department of Social Protection in its formal tribute to Sean Mac Diarmada, at Áras Mhic Dhiarmada. PPSG were also delighted to meet some of the family of Sean Mac Diarmada, who are still living in Ireland.

The presentation of the Carol Quinn Wallace portrait of Sean Mac Diarmada was made at the launch of an exhibition of paintings by the artist called “A Nation Rises”, at The National Maritime Museum of Ireland, in Dun Laoghaire, Co. Dublin.

This collection celebrates and features the key participants in the 1916 Rising, being beautifully rendered, with a wealth of colour and warmth, often missing from the black and white photos of the time – in short, Ms Quinn Wallace brings the personalities to life.

We are extremely grateful to this talented artist for this gesture, which should assist us in our fundraising and publicity endeavours. The exhibition runs for the next two months in the Maritime Museum.

The Post Polio Support Group is working to raise awareness of the continuing difficulties faced by those who survived the original virus in Ireland in the 50s and 60s, during the polio epidemics. 7,000 Survivors of Polio are estimated to live in Ireland today, with many people still living with disabilities brought on by the disease. Others are suffering from the late effects of Polio, also known as Post Polio Syndrome, significantly increasing their disability and causing pain and fatigue later in life.

The Post Polio Support Group was established for Polio Survivors by Polio Survivors in 1993. We are the only organisation in Ireland providing practical support (and sometimes more importantly a listening ear) to those unfortunate enough to have contracted Polio when babies or young children.

We provide stair lifts, callipers, bespoke footwear, electric scooters and wheelchairs. We also help Survivors access Physiotherapy, Occupational Therapy and Respite Breaks, as well as other supports. The group works to raise awareness, provide information on Polio and its late effects and to ensure Polio Survivors can live with dignity.