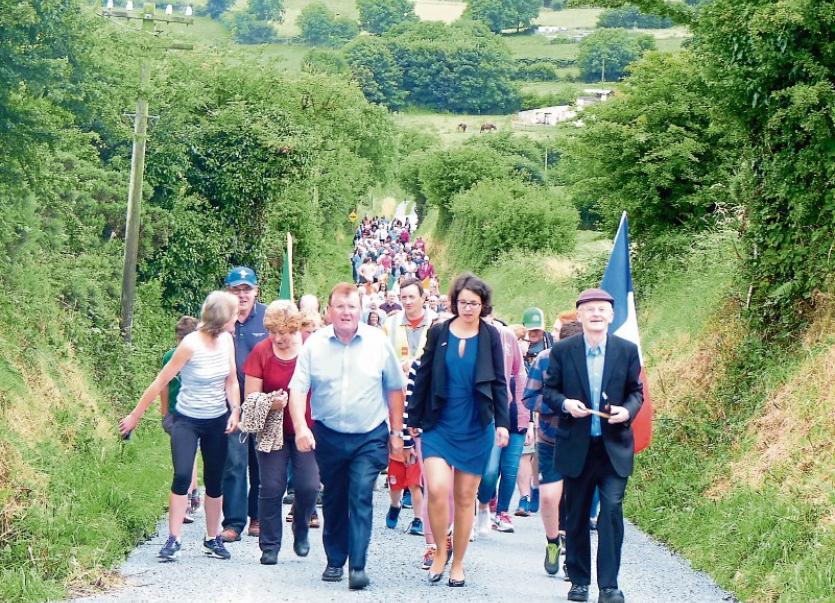 This year’s tenth annual Famine 1848 Walk was the largest ever in Ballingarry.

People from Ballingarry and the surrounding parishes and indeed as far away as Dublin were represented. The local schools marched behind their school banners.

The Walk began at the Young Ireland 1848 and national flag monument in the village of The Commons. The Walk Leader was Madam Cohen, the French Chargée d’Affaires.

The French Ambassador who was looking forward to leading the Walk was called to France at short notice and he was represented by Madam Cohen. (The Chargée d’Affaires heads an embassy when the Ambassador is away.)

She began her opening remarks in French on how honoured she was to be able to join with the attendance in commemorating all those who suffered and died in the Famine and the 1848 Rising. To the strains of the Moycarkey Pipe Band she then led out the Walk on the mile and a half journey to the Famine Warhouse where another large crowd awaited.

A group photograph was taken in front of the house. On behalf of the organizers of the Walk, the Ballingarry 1848 Society, Dr Thomas McGrath noted that this year’s Walk in the centenary year of the Easter Rising celebrated the many links between 1848 and 1916 and between Ireland and France. He stated that the Irish national flag had French origins in 1848 and he recalled how the IRB which was responsible for the 1916 Rising was founded by men who were present in Ballingarry in 1848. He also drew attention to the twenty five Ballingarry men who died fighting in France in World War One. The Walk actually passed the locations where two of these men lived: Patrick Delaney of Kyle who died on 1 July 1916 on the first day of the Battle of the Somme in northern France and William Sullivan also of Kyle who died on 28 June 1916. Superb posters pointing out this fact marked the sites of their houses and Madam Cohen’s attention was drawn to them as she led the Walk. Dr Mc Grath on behalf of the attendance sympathised with Madam Cohen on the recent terrorist attacks in France. Madam Cohen thanked the audience for its expressions of solidarity with France.

In a wide-ranging speech Madam Cohen covered Franco-Irish relations over the centuries from St Columbanus. She pointed in particular to French influence on the United Irishmen and the attempted invasions of Ireland by France in the 1790s. She also commented on the significance of the Irish tricolour being brought from Paris in 1848 by Thomas Francis Meagher and on Irish support for France in World War One. Madam Cohen’s engaging and friendly manner was much appreciated by her audience.

In a symbolic exchange of tricolours, Martin Maher, Chairman of the Ballingarry 1848 Society, presented the Irish national flag to Madam Cohen. The Irish national anthem was played by the Moycarkey Pipe Band. Madam Cohen presented the French tricolour to Clare McGrath, Chairman of the OPW, for permanent display in the Famine Warhouse. The French national anthem was played by a local group of musicians led by Nicky Brewer and Noel O’Brien. A bouquet of flowers was presented to Madame Cohen by Marie Barry. Light refreshments were then served to all in the courtyard of the house.