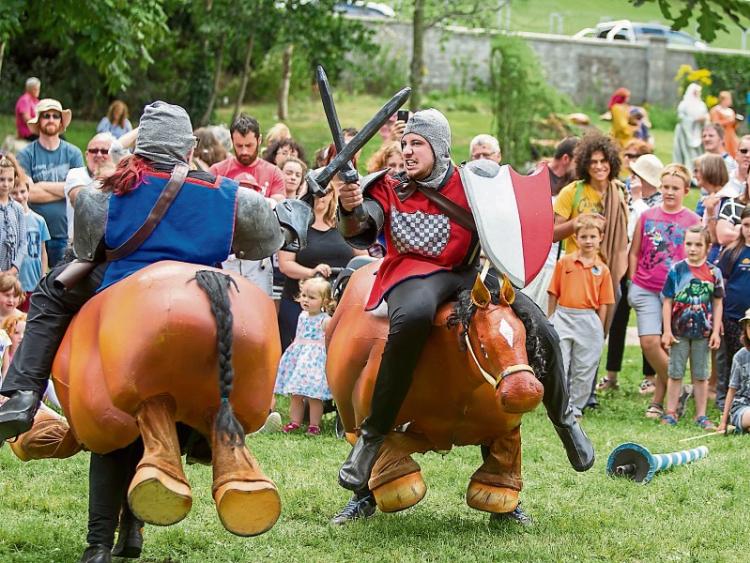 Between 8,000 and 10,000 people are estimated to have enjoyed Sunday's Family Fun Day at the Denis Burke Park in Clonmel.

Amid a great atmosphere in the park people of all ages basked in warm sunshine alongside the river and enjoyed a range of attractions including music, heritage events and demonstrations in the medieval village; wrestling and children's activities that included bouncy castles and water zorbing.

The festival highlight on Saturday was the busking competition, which drew crowds onto the town centre streets.

The competition was won by local traditional music group Mochóirí, who received a cash prize of €500, studio recording time and the opportunity to perform at the Family Fun Day. Other musical acts that entertained the crowds at the Denis Burke Park on Sunday included The Waheys, The Relics and Banna Chluain Meala.

And to cap it all the donations made over the weekend surpassed last year's total of €17,600 for Our Lady's Children's Hospital in Crumlin, with counting still taking place this week.

The festival was launched at Hotel Minella on Thursday evening with the premiere of a very enjoyable short film depicting Cromwell's Siege of Clonmel in 1650. The main cast included service users from Rehab Care.

On the same night Eamon Cowan launched his graphic novel depicting Cromwell's siege of the town.

And on Friday night the Medieval Inn Trail was held.

"The Family Fun Day at the Denis Burke Park has been a great success for the past two years. People have said that last Sunday was the largest crowd that had gathered in Clonmel since the Fleadh Cheoil was held in the town".

"The busking competition was a huge bonus and we'll really expand on that next year”, says Eelco Beckers."We had an extra 150 musicians on the streets on Saturday and that made all the difference.

Next year we'll have different categories, with major prize money, and hopefully hold the competition over two days.

There was also a great buzz at the launch night on Thursday and the film was great".

Josh Beckers was the inspiration for the festival. As a young child he spent time in Our Lady's Children's Hospital in Crumlin.

His parents were so touched by the care he received from the staff in Crumlin that his father Eelco decided he wanted to do something to give back to the hospital, so he organised a half-day busking event six years ago‬.

This has since grown into the successful four-day festival that Clonmel now hosts.

Eelco is grateful to everyone who contributes to the continued success of the festival.

Indeed all those who ensured that this year's event was so memorable can take a well-deserved bow.