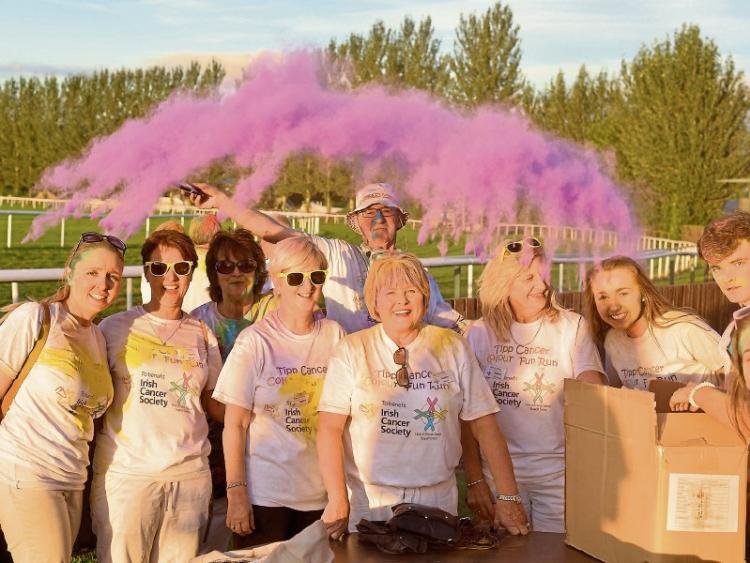 Tipperary Racecourse recently hosted the Tipperary Cancer Colour Fun Run in aid of two very worthy charities; the Irish Cancer Society and the Circle of Friends – Tipperary Cancer Support Centre. The unique run took place over one furlong, while colourful powder paint was shot into the air, covering the crowd head to toe in bright, dazzling colours. In anticipation of the event, each participant received a sponsorship card and generously raised funds for the charities involved. Spectators and runners alike were able to purchase colourful powder to throw at their friends, with all proceeds going directly to charity. The atmosphere on the evening was electric, with over 500 runners of all ages from all over the country taking part. Former professional rugby player for Munster and Ireland, Alan Quinlan, was among the runners that took part on the day. Trainers and jockeys including Fozzy Stack, Kate Harrington, Billy Lee and Emmet McNamara, Gary Carroll and Shane Foley also got involved in the fun run after racing, as well as a large number of people working in the racing and breeding industries including At The Races broadcaster Kevin Blake. Well-known radio personality Johnny Looby commentated, which created the atmosphere of a real horse race! Popular acoustic Irish folk-rock band Hermitage Green entertained the crowds after the colour run with a live concert to finish the night off.