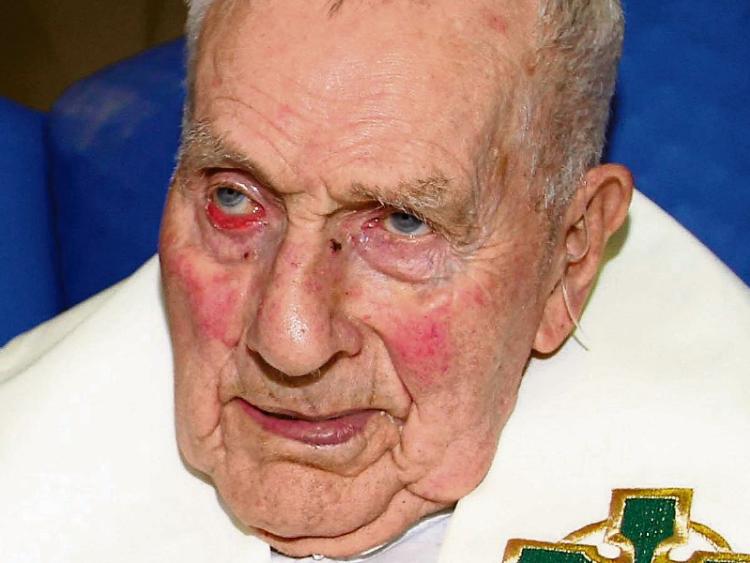 The homily at Fr Dan Fitzgerald's funeral Mass was given by his good friend and fellow Coumban Fr Sean McDonagh, who recalled that it had only been six weeks since he had congartulated Fr Dan on reaching his centenary.

“Little did I think that I would be back, preaching at Fr Dan’s funeral Mass. June 28, 2016, was a time of great rejoicing, and I am sure everyone one of you here has a precious memory of something which was said or done on that day which you will carry with you all your life,” said Fr Sean at the ceremony in Dalgan Park, County Meath.

“When I heard the news of Fr Dan’s death in Nenagh, the other night, I felt really sad at the passing of one of the finest human beings, priests and Columbans I have ever known. I will miss my visits to him where we discussed sports such a hurling and golf, Nenagh news and even climate change. Nevertheless, I was delighted that Fr Dan’s passing to God – was achieved so quietly and without pain. I also thanked God that Fr. Dan had spent his last days – thanking everyone in the nursing home for their kindness to him,” he said.

Fr Sean said that Fr Dan had lived a long and very fruitful life – 77 years as a priest.

“All of us who have known Fr Dan, whether fellow Columban’s, relatives or parishioners from Nenagh and North Tipperary will remember moments in our lives when Fr Dan’s ministry touched us in special way,” he said

Nenagh-born Fr Sean said that the locus for hiself and so many others in North Tipperary was often in Fr Dan's hospital ministry.

During his 23 years of service Fr. Dan visited the hospital every night. Almost every family in North Tipperary has some story to tell about meeting Fr Dan on nightly rounds in the hospital.

“I remember Fr Dan visiting my mother in Nenagh Hospital, but I also remember his kindness to my mother – he brought her communion every day for six-and-a-half years. On the night my mother died even though it was late, well beyond his bed time, Fr Dan was waiting for me at home with a prayer on his lips and a word of hope. In terms of Isaiah he certainly comforted those who mourn,” said Fr Sean.

He said that by early last Wednesday everyone in Nenagh had heard of Fr Dan’s death. “I met scores of people who had a similar story to my own of Fr Dan’s kindness and healing ministry.”

His ministry was not confined to Catholics. Fr Dan visited everyone in Nenagh Hospital – not just the Catholic. Fr Dan was a reconciler and brought harmony out of many difficult situations.

Fr Dan had a long life and long ministry. In his ministry from China, through Australia, Scotland and Ireland, Fr. Dan shared the Good News of Jesus – in his preaching,, but more so in his example, said Fr McDonagh.

“Fr.Dan spoke to everyone – from teenagers to older people. He was the chaplain to the Christian Brothers where he shared the faith with what he called his young theologians. On Wednesday, one of the students, now in his late 30s, said that with Fr Dan – you always knew that he practiced what he preached.”

He said that Fr Dan was well aware that the public response to religion, but especially Catholicism in Ireland, was much more negative and sometimes even hostile today than it was in his youth and, that the Good News of Jesus was being impeded and often dismissed as having little to offer to young people.

“That is why for Fr Dan all of us are called to be missionaries in Ireland today. This is a crucial period in the life of this country and all of us have an important role to play – in securing a Christian presence in this country into the future,” he said.

Fr Sean said that one of the reasons why people felt attracted to Fr Dan was because of his deep prayer life.

“Fr Dan gave master classes in prayer, not in the parish centre or Institute of Spirituality, but in the many hours he spent praying in St Mary’s of Rosary Church, Church. As the people of Nenagh know very well – any time you would dropped into the church to say a prayer, Fr Dan could be seen praying before Our Lady’s Altar,” he said.

Fr Dan was born in Cork in 1916, He entered Dalgan in Shrule in 1933 and was ordained in 1939. He was assigned to the Philippines but never reached their because of World War II.

In 1946, after World War II had ended, Fr. Dan set sail for China on a troop carrier ship in 1946. . Eventually, they reached Hanyang. By today’s standards China at that time was still very underdeveloped. There were no roads or railways. The only mode of transport was walking or taking a boat on the Yangzi River. The task facing these missionary was enormous. During Fr Dan’s six years in China the political situation was quite chaotic. Nevertheless, for Fr Dan it was a great privilege to work in the diocese of his great mentor, Bishop Galvin – whom he held in such high regard.

Fr Dan left China in 1952, but during all his life he continued to be interested in China and, especially what was happening in the Church there. In the 1950s, Fr Dan worked in Australia, Scotland and Ireland.

“All through his life, God and God’s work in our world was the central focus of his life. Fr. Dan was a truly humble man,” said Fr Sean.

Fr Dan had difficult challenges in his life. It wasn’t always plain sailing for him. He too had to carry his pain, sufferings and cross.

“I can remember in 2012 when Fr. Dan’s health began to deteriorate and the possibility of him coming back to Dalgan was broached what a difficult decision it was for him and for others. Fr Dan did not want to return to Dalgan because, in his own life he experienced scruples when living in a large, institutionalise community. I remember saying to Fr Dan at the time that he could ask the Columbans to have his body buried in Nenagh – where people, I am sure, would visit his grave as a pilgrim place. It was at that point that Fr. Dan said to me that the reason why he wish to buried in Dalgan is that Bishop Galvin is also buried there.

“By the way, Fr. Dan wasn’t too interested in the idea of pilgrims visiting his grave! Though I think his family and friends from Nenagh will regularly visit his grave and pray for many intentions. And for myself it will always be an important pilgrim place in my life,” he said.

Fr Sean said that Fr Dan was truly loved by the people of Nenagh and the priests who worked with him in St Mary's of the Rosary Church. The nursing staff at the hospital loved Fr Dan and appreciated his ministry.

In an email to Fr Donal Hogan on March 12, 2012, Fr Pat Malone wrote that “Fr Dan is deeply loved, highly respected and greatly valued by the whole community.” He wrote that 21 nurses were willing to organise a rota to look after Fr Dan’s medical needs.

“Fr Dan did return to Dalgan, but many people from Nenagh continued to visit him on a regular basis. I think of Winnie King. Kathleen Courtney. Helen and Tony McCormack, Dan and Mary O’Donovan and many, many others. He also loved to see his relatives coming. These visits which were a testimony to real friendship, brought him so much joy.

“I wondered whether there was anything akin to a Guinness Book of Records in Heaven and in the context of the person who had said the most rosaries ever Fr. Dan would have great chance of winning the prize. But then, of course, he did win - just before he died he joined Kay Burke in saying his last Rosary.

“Which leads me to the second reading, Paul’s letter to Timothy: 'As for me, I am already being poured out as a libation, and the time for my departure has come. I have fought the good fight, I have finished the race, I have kept the faith. From now on there is reserved for me the crown of righteousness, which the Lord, the righteous judge will give me on that day, and not only to me but also to all who have longed for his appearing'.

“For Fr Dan that day has arrived. I ask him now to pray for us that we might be as right with God, with fellow human beings and with the Earth when our day comes,” said Fr Sean.