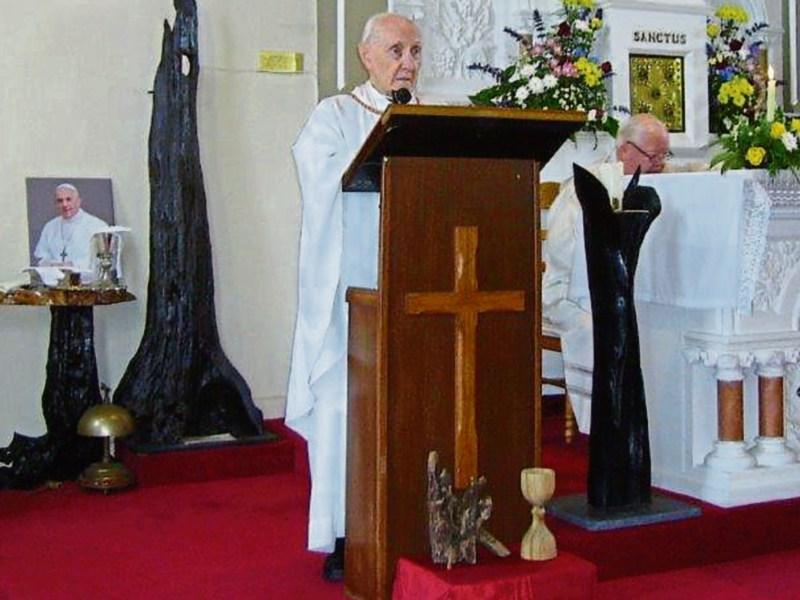 On Sunday July 3, Clonmel born Fr. Joe Flannery celebrated the Diamond Jubilee of his ordination with Mass in St. Ruan's Church , Kilruane followed by a reception in the Abbey Court Hotel, Nenagh, which was attended by family members, relatives and friends.

Concelebrants with Fr. Joe for the Mass were Fr. Joe Egan, Parish Priest of Boherlahan, and Fr. Sean Dwan, Kilruane and Dalgan Park.

Fr. Joe's good friend and parishioner Tony Behan who had travelled to Ireland with him was also present.

Because of his family ties with the Kilruane area, Fr. Joe has previously returned to celebrate his silver, ruby and golden jubilees over the years - all the milestones of his ordination day with Mass in St. Ruan's Church followed again by a reception in the Abbey Court for family and friends.

Fr. Joe's grandparents, John and Bridget Flannery were teachers in Kilruane old school back in late 1800s and early 1900s. Fr. Joe's grandfather John (a friend of Joseph MacDonagh, father of 1916 leader Thomas MacDonagh) held the position of Principal until he retired in 1914.

John and Bridget (nee Markaun) had six children , one of whom was John - Fr. Joe's father.

Fr. Joe himself is the youngest of 3 children , born to John and Mary Flannery ( nee O'Leary) a native of Inagh, Co. Clare.

Fr. Joe's only sister Mary was married to Joe Hillery in Clonmel and his older brother, Canon John who died in 2014, was a priest of the Glasgow Diocese and is buried in Kilruane.

Fr. Joe attended the Sisters of Charity Pre-school, and the Christian Brothers' Primary and Secondary schools in Clonmel, and went on to study for the priesthood at St. John's College Waterford, where he was ordained on June 29th 1956.

Six months later, following a five week sailing trip, by the west coast of Africa, stopping briefly in Capetown and Port Elizabeth, he arrived in Brisbane on Christmas eve 1956.

He celebrated Mass on Christmas day at 7am in the unfamiliar setting of a tropical climate.

His first appointment was to the Cathedral in Brisbane, with Archbishop Duhig, where he worked alongside four other priests. All his appointments have been within the Catholic Archdiocese of Brisbane where he served as a priest in a pastoral capacity for the past 60 years.

Fr. Joe retired from parish duties in the inner city parish of Everton Park where he had served for 32 of his 60 years .

Fr. Joe says that parish work for a priest in Australia is probably not very different from parish work anywhere else. However, some difficult challenges have to be met, for example, extreme heat in the summer, long distances to travel, and faith families living at greater distances from each other, especially in country parishes.

For summer holidays each year , Fr. Joe and his brother Fr. John loved to return to Ireland to visit their many relatives and friends up and down the country from Clonmel to Clare to Clonmacnoise to Omagh to Dungarvan to Kilruane.

In his student days, Fr. Joe's favourite mode of travel was his motor bike which gave him a great sense of freedom. He would like to think he can be remembered from those days as one of "Heaven's Angels."