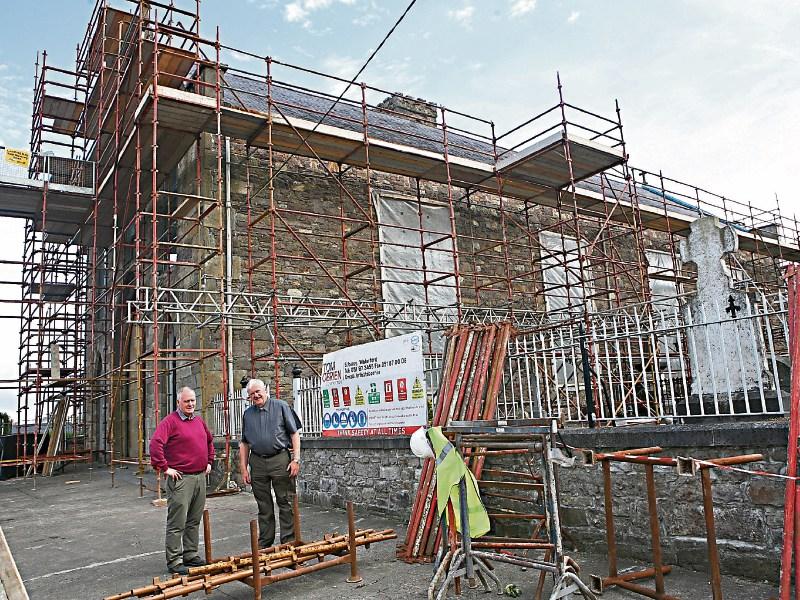 The Parish of Carrickbeg & Windgap is launching a new fund-raising campaign to help pay for a new €600,000 roof for St Molleran's Church.

Parishoners will be invited to "buy a slate" for the new roof of the early 19th century church at the top of Friary Hill. St Molleran's has been closed for the past month as the appointed building contractors got the project underway.

Scaffolding now surrounds the church and Masses and other church ceremonies have moved temporarily to the Friary Church nearby.

This is the first time church ceremonies have been celebrated at the Friary since it closed as a place of worship ten years ago.

Waterford-based Tom O'Brien Construction building contractors will this week begin the painstaking job of removing the roof slates of the church that was built in the late 1820s.

Parish priest Fr Tom Flynn said the contractors will try to preserve as many of the slates as possible and re-use them in the new roof.

“We hope to be back in St Molleran's for Christmas," he told The Nationalist.

The replacement of the church's roof hasn't come a minute too soon.

Fr Flynn said an engineer who examined it last year declared it to be in a dangerous state. The roof's wooden structure was rotten and warped and urgently needed to be replaced.

Indeed, the poor condition of the church roof has been of concern since the 1980s.

Carrickbeg & Windgap parish, that boasts about 2000 parishoners, has been fund-raising for the new roof for the past five years. The campaign. comprising a combination of donations and community events like a mock wedding, has raised €410,000 to date.

Fr Flynn said the Diocese of Waterford & Lismore has financed the remaining €180,000 through an interest free loan that is to be paid back over five years.

Raising money to repay the loan is the goal of the Buy a Slate campaign that will kick off soon. Information on how to get involved will be announced in the next few weeks.

Fr Flynn paid tribute to Carrickbeg & Windgap parishoners for their huge generosity and support for the church roof fundraising campaign.

"They are a fantastic crowd to collect more than €400,000 in a small parish," he declared.